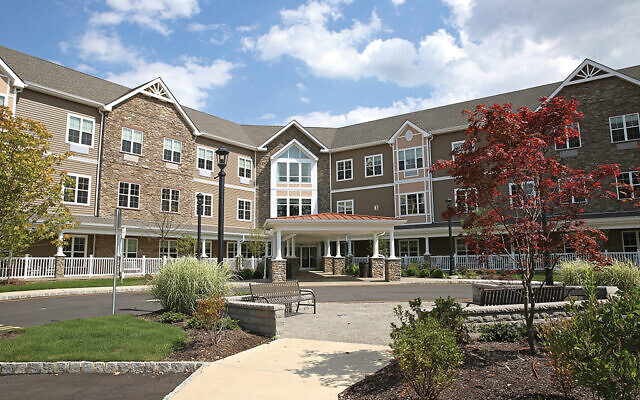 The Villas retirement community in Manalapan, N.J. Photo courtesy of The Villas

Like many Jewish seniors, Allen Kent saw his retirement take an unexpected U-turn — from suburban New Jersey to Florida and then back up north, after his wife of 65 years died and his grown children wanted him nearby. “They’re worried about me,” laughed Kent, who enjoyed a career in show business and cops only to being “over 90.”

“I wasn’t supposed to live this long!”

Kent, who still enjoys weekly restaurant outings, was not about to start over with homeownership. Instead, like many older New Yorkers and New Jerseyans, he chose a senior living community that is close enough for progeny to visit, with a full suite of medical and social services. For the past decade, Kent has lived in a comfortable apartment by the Hudson River at Brookdale Battery Park City, along with 215 other retirees and at least 20 resident dogs.

As much as he loved Palm Beach, the Newark native has only raves for his new Manhattan lifestyle. Initially reluctant to live in a place “with a lot of old people,” Kent was won over by Brookdale’s elegant dining room, excursions to Broadway shows and art museums, and activities including happy hour and Spanish class. He’s even found fellow Yiddish speakers.

Such communities are popular among Jewish seniors, who are more likely than their parents either to remain up north near family — or to return, as Kent did, in a second-retirement phase. “There’s a definite trend of people wanting to live near their adult kids,” said Gail Hochfeld, director of sales and marketing at Brookdale Senior Living Solutions. Many, like Kent, are older and returning to their home regions after a decade or two in the Sun Belt.

Trading Florida sunshine for icy winters might seem counterintuitive, “but I’ve seen it so much now, it doesn’t surprise me anymore,” said Hochfeld, adding that the average Brookdale resident is over 75 and well-traveled. “People living in and around New York City with great jobs want their parents nearby.”

Communities are responding by tailoring a range of living arrangements to the evolving needs of the elderly. Members can choose from independent and assisted living options; the latter offers more personalized help with a variety of daily activities such as dressing and hygiene, meals, mobility and medical care. Many centers offer so-called “memory care” units, for people with dementia and Alzheimer’s. Some communities integrate nursing care for patients with more complex medical needs.

“With 10,000 baby boomers in the U.S. turning 65 every day, our continuum-of-care-model has never been more relevant,” observed Matthew Anderson, president and CEO at The Osborn in Rye, in Westchester County, which was founded in 1908. Nearly half The Osborn’s population of 435 are in independent living units, with another 100 in assisted living and the rest variously in memory care, long-term nursing and short-term rehabilitation.

And while the lifestyle does not come cheap — monthly rent at metro-area communities starts between $5,000 and $10,000 for independent living, with costs escalating along with additional care — families say it is worth the reassurance that medical, social and practical needs will be met as seniors age in place. “Residents can literally stay until their last breath,” said Hochfeld, explaining that at Brookdale — unlike some other communities — clients live in the same apartment even as their care needs change (monthly rent starts at $8,000). 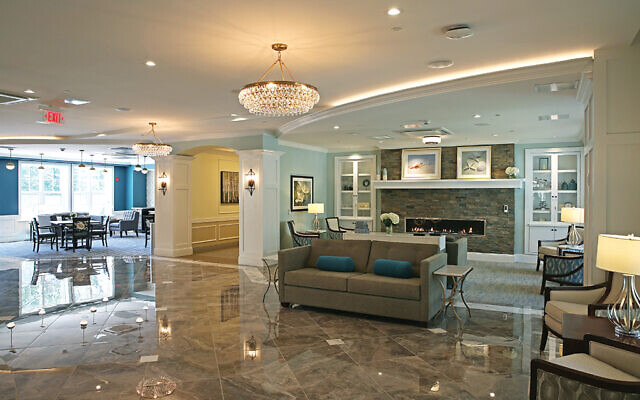 The Villas Manalapan installed a pizza oven for residents used to the area’s famous Italian food. Photo courtesy of The Villas

Facility price tags also cover an ever-expanding slate of diversions. “Seniors are looking for higher level activity programs,” said Deborah Shane, a spokesperson for Mattison Crossing at Freehold, which offers assisted living, memory support and short-term “respite” stays that give caregivers a break for a month or longer. “Gone are the days when bingo was the main event.” These days, Shane said, expectations are more sophisticated, with card games supplemented by theater and Zumba.

Shabbat services, Purim parties and Chanukah candles are also on the menu. The rhythms of Jewish life go on at metro-area retirement centers, reflecting the area’s significant Jewish population. At Mattison Crossing, where monthly rents start at $3,900, approximately 90 percent of members are Jewish, Shane said.

Did someone mention food? Worldly palates are driving a gourmet trend at senior communities. “Food is a big deal,” said Hochfeld. At Brookdale Battery Park, “we have a vegetarian dish every night now.”

Meat and potatoes may have sufficed for their own parents, but Americans nowadays are accustomed to meat-free entrées, cauliflower crusts and almond and soy milk for their morning lattes. Every week, a group of foodie residents meets with Brookdale’s executive chef to chat about menus and suggest favorite dishes.

Mattison Crossing has a “traveling foodies” club that takes monthly excursions by van to local restaurants. And The Villas, a recently opened retirement community in Manalapan, N.J., installed a pizza oven for residents used to the area’s famous Italian food, said spokesperson Stacey Davis. Breads come from the on-site bakery, and an open kitchen allows diners to watch chefs at work, just like at trendy restaurants.

The new gastronomic focus reflects an overall emphasis on wellness, according to industry experts. “The residents coming to us are really interested in healthier living,” said Davis. “They want wellness incorporated into every activity, all day long.” That means not only farm-to-table ingredients, she said, but also daily yoga and holistic rehabilitation options like cognitive stimulation.

The Villas opened last fall with 95 units, starting at $4,950 per month, including independent and assisted living apartments, nursing and memory care and a hospice wing with family suites. There’s a movie theater, a game room, live entertainment and nightly cocktail hour. “Because we’re a smaller community, we’re able to customize individual plans for each resident,” said Davis.

In choosing a retirement community, experts advise seniors and their families to consider a variety of practical as well as less tangible factors. Hochfeld, the Brookdale spokesperson, cautioned against placing too much emphasis on location. “One day they won’t be going out as much as they are now. Then it won’t matter where the community is situated,” Hochfeld noted. “What will be most important are who your current friends, neighbors and staff are. It is all about the fit.”

Alternatives for ongoing medical care are also important, said Davis. “How well can the team manage care needs at the community, so that the resident is not sent out to the hospital frequently?” she reflected. “Can the community provided higher acuity care, or will my loved one need to transfer to a nursing home?”

For Kent, who is proudly independent, Brookdale strikes the right balance. He subscribes to just 15 meals per month: “I eat out a lot,” he said. If he ever needs more care, it’s available. For now, “they keep you busy here,” Kent added. “Yoga classes, book clubs. Whatever you want to do, they have it. This place handles everything.”