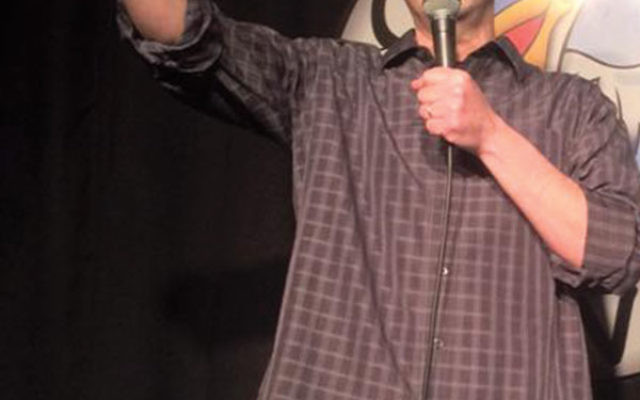 Comedian Alex Bernstein in the spotlight at Scotty’s Comedy Cove in Springfield.

What kind of author writes a book with a seemingly unpronounceable title, refuses to divulge its meaning in an interview promoting its publication, and insists that a person read the first half before learning what the word means?

The title of his book is Plrknib. It is pronounced “plerknib” and is the punchline of a joke that appears half-way through his narrative. It is his story of exploring a passion for amusing people that began while in high school.

About halfway through the book “the narrative turns on this one joke. The joke becomes crucial to the narrative and its punchline is ‘plrknib,’” Bernstein said.

It is a coming-of-age story about a high school senior in the late 1970s in a comedy club in Bernstein’s hometown of Cincinnati. What sets it apart from other books about comedy and comedy clubs, he insisted, “is literally this joke.”

But, he said, Cincinnati “is not funny at all.” After graduating from high school and moving to Westchester to attend Sarah Lawrence College, Bernstein got married, then went to Los Angeles “to do the whole screenwriting and movie thing.”

Family considerations brought him and his wife to their present home in Cranford. “But honestly, where I live in Jersey, if you didn’t know where you were when you woke up in the morning you might as well be in Cincinnati.”

Bernstein said he has “a day gig” as a marketing director for a New York investment firm. So to counterbalance a job that he calls “too serious,” he teaches comedy classes at Temple Sholom in Scotch Plains and does a stand-up act at clubs in New York and New Jersey.

“I did it [comedy] aggressively when I was a kid, and as an adult I came back to it after a 25-year break when I was asked to perform at fundraisers with all-Jewish content,” he told NJJN.

Although he has taught non-Jews and Jews in a summer workshop at the temple, Bernstein declared “I am absolutely” a Jewish humorist.

“I have two acts — a regular act and a ‘what I do at temple’ act.” He said the latter is “more fun” because “the audience is so specific and mainly it is about me talking about bad bar mitzvah experiences.”

One joke he said would not work with a multi-religious audience would be “My wife gave me a red and green scarf a few years ago and if I wear it into a temple, I can say, ‘I am wearing my Christmas tallis.’”

Another example, “One year at the temple they asked me to dress the Torah and I didn’t know what to do, so I put it in a Barbie policewoman’s outfit.”

“If I said it at a regular club people would just stare at me. They wouldn’t know what that means.”

But when he makes jokes about his childhood struggle to learn Hebrew he get laughs among secular audiences as well as those based in synagogues.

As a child he attended two congregations — the Conservative one where his father belonged and the Reform temple where his mother went. “My grandmother kept kosher, but my family just pretended they did. It was really confusing,” especially in Cincinnati. “It is known as Porkopolis. It is a very Germanic town. It is a leading exporter of pork products.”

Nonetheless, he said being Jewish was not a hassle when he was growing up.

“I didn’t get picked on by anti-Semites, but the book takes place in the late ’70s and early ’80s. If it took place in the 1950s there would probably be a big anti-Semitism streak in it. People may have picked on me, but not specifically because I was Jewish.”

Being a stand-up comic is really tough, he said. “The schlepping from club to club is the worst part of it.”

Bernstein began his act in 1980 when local comedy clubs, spurred by stand-up shows on cable television, sprouted up all over the country. “I was in the right place at the right time and got this regular gig at a club in Cincinnati.”

Then and now, he finds “a massive support system” for his comedy. At the age of 53, he performs with people half his age who “are out three and four times a night, which I don’t have the constitution for, but it is a really, really tough lifestyle.”

His earliest influence was Woody Allen, whose “early stand-up was brilliant to me. He put himself out there as a painfully unattractive Jewish kid and I found that so hopeful.”

As his book indicates, Bernstein has an ambivalent relationship with borrowing (some may call it stealing) jokes from other comics. “I try to have my own voice, but if you heard Woody Allen in my act I wouldn’t complain. I also loved Robert Klein, George Carlin, and the earliest incarnation of ‘Saturday Night Live.’”

For two years in high school, he and several friends hosted a comedy show on a local radio station, WAIF, where they played albums from all the popular comedians of the day such as Lenny Bruce, Bill Cosby, The Firesign Theater, and The Credibility Gap.

“I don’t work dirty. I have nothing against people who do, but for me it is a place of last resort. I think you have to do what is right for you,” he said.

As for political humor, “in the past year I did a lot of Trump and Hillary jokes and I personally think they didn’t go over that well. I think some of the bits were good, but the audience was super-polarized.”

He did get laughs when he said, “I want to tell something that may shock some people: Bernie Sanders is a Jew.” But, he added, “I got more mileage out of stuff that was less political.”

When things go well in performance “it’s like the best drugs you ever had and it’s the worst nightmare when it goes flat. But regardless of both things you have to keep going and move on.”

Bernstein will be appearing at Temple Sholom in Scotch Plains on Feb. 25 at 7 p.m. For more information, go to sholomnj.org.