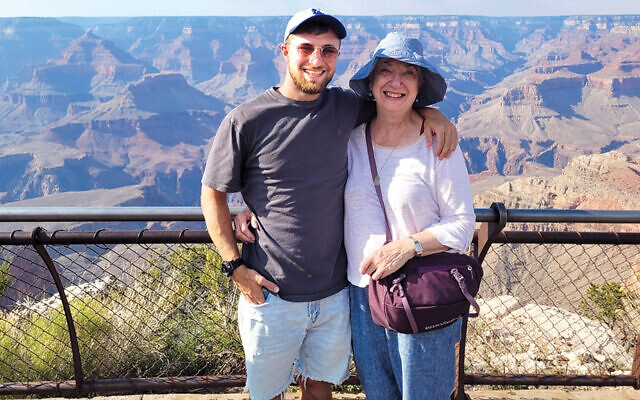 Ms. Bierler and her grandson Gershon Kwalbrun stand happily together at the Grand Canyon this summer.

I had a recurring dream about my grandmother — my boubie — when I was younger.

My boubie — that’s the odd spelling of the Yiddish word that my mother initiated and I have perpetuated — and I were on a public bus together, although that’s a situation that actually never occurred in real life. We came to our stop one block away from home, the doors opened, and I hopped off. But I did not pay any attention to my boubie’s slow pace behind me. Turning around, I struggled to breathe as I realized that my boubie was nowhere to be found!

I was horrified that I had not taken better care of her, and because I did not give her my full attention, she was still on the bus as it drove away. How frightened I was as I imagined how frightened she was. She would not be able to communicate with the bus driver since she spoke only Yiddish, she had no idea how to navigate a bus route, and I was bereft because I feared that I had lost her forever.

My panic and sadness in this constant dream about losing my grandmother surprises me. Although she lived with us and we shared a bedroom until I was about 10 years old, I have few memories of sought-out interaction or strong feelings of closeness. Did I love my boubie? Of course I did. Did I love the person my boubie was? I have no idea.

My much older brothers remember her quite differently; they say she “was really something”; unlike me, both of them spoke in Yiddish to her, and as I listen to their warm recollections, I am a bit jealous of their memories. In hindsight, I wish I knew that “really something” piece of her. Perhaps my dream was an unconscious reprimand, tell me that I should have paid more attention.

The next generation boubie in my life was my mother. Was she a different kind of grandmother than her own mother had been? Of course she was. She clearly loved spending time with my children, and with that competitive edge to her personality (a trait some of us inherited), she could spend hours playing games with them. She loved sending us her amazing chocolate chip cookies, she always had those beloved salami sticks waiting for the kids when we arrived before Passover, we loved hearing her sing the Yiddish song about the little sukkah when she joined us for that holiday, and she always encouraged me and my children to believe we could do anything. 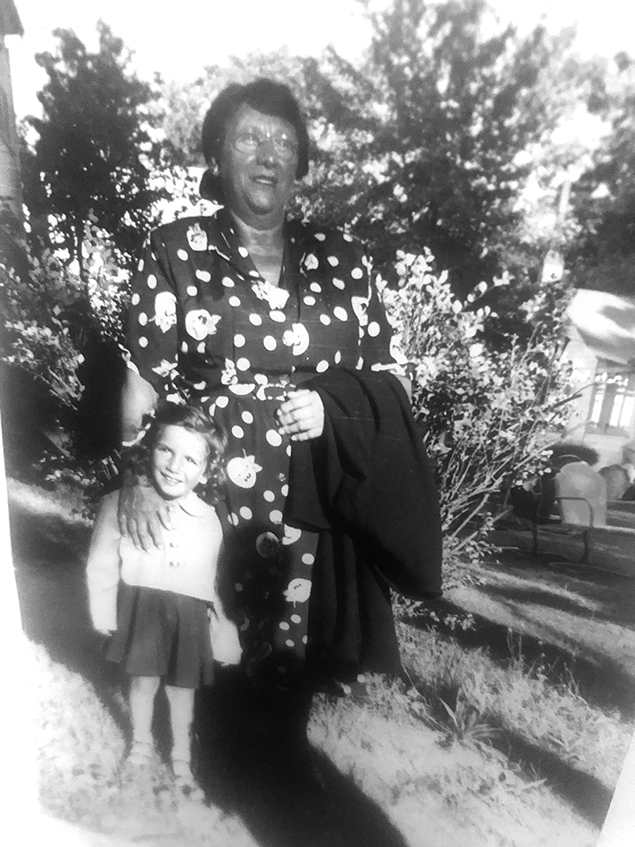 Young Tzivia stands with her own boubie.

But there were two realities of life that worked against her, none of which were of her own making but rather a result of the times in which she lived. Unlike most of the Jewish women of that generation, my mom worked six long days a week with my father in his grocery store, which generally allowed for one — and only one — visit from Chicago to Teaneck per year. And she was perhaps the last generation that essentially functioned without the positives (which I emphasize because there are definitely negatives) of cell phones, internet, emails, Facetime, phones that take photos, basically all the technology that keeps us connected when different cities keep us apart.

Did my children love my mother? Absolutely yes. But just as I never sat and talked to my boubie to understand more about her life, I don’t think my children ever sought my mother out that way either, nor did my mother think to encourage such discussions. Perhaps that was my fault once again for not paying enough attention, and not encouraging my son and daughters to do so as well.

I thought a good deal about these relationships recently. My 24-year-old Israeli grandson, after so many months of covid, was coming to the States this summer to visit with family. We have (and I hope he will agree) a close and loving relationship. And I say this with the full knowledge of the differences that inherently exist due to different generations, different upbringing, inevitable opposite points of view. Sometimes we speak the same language; sometimes he is from Venus and I am from Mars. No matter; we understand the process.

So I wanted to do something special with him. But what could I suggest that would make this former commander in an IDF special forces unit want to spend five days essentially alone with his 74-year-old grandmother? Knowing that he loves to travel, I presented the idea of going on a unique trip that I hoped he could not refuse. “Let’s fly to Arizona!!! You can visit a bit with your uncle and aunt in Phoenix” —they had not seen him for seven years! — “and then we will drive up to Sedona and the Grand Canyon.”

I admit I patted myself on the back; he accepted my offer in a heartbeat.

Our time together was a priceless gift. In Sedona, we shared the experience of being surrounded by God’s beautiful and unusually shaped red mountains and we hiked one late afternoon together on the Devil’s Bridge Trail for 2 1/2 hours (100 degrees at 4:45 pm; please be impressed!). Unlike my dream with my boubie, he kept a close watch over me, walked a slower pace so I could keep up, held my hand when the rocky path was difficult, and kept offering me water in the heat.

And when we witnessed the silent powerful grandeur of the Grand Canyon for the very first time, we were so overwhelmed that together we recited the prayer on seeing one of God’s natural wonders. Later in the day, we sat alone on the rocks and quietly watched the sun set over the Grand Canyon. We spoke the same language without uttering one word. 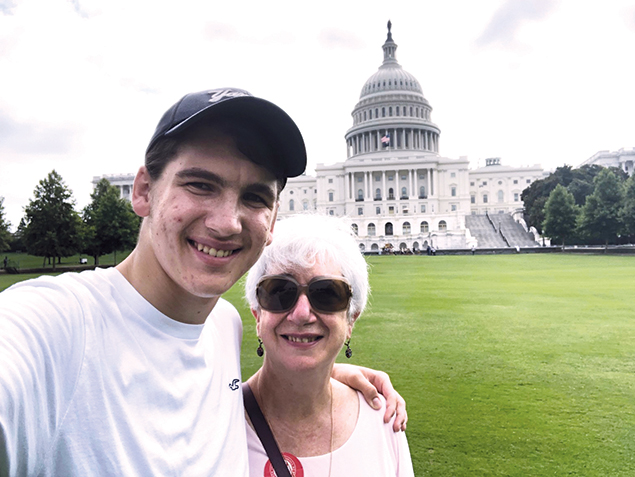 Boubie Tzivia and her grandson Dov Betzalel Schneider spent some time together in Washington this summer.

Much driving back and forth afforded hours of quality time and lots of different discussions; we listened to music we actually both enjoyed. When we needed to add some food to what we had in our cooler, we laughed in amazement when, in the middle of nowhere in particular, we found hummus, guacamole, and this amazing spicy sauce called “Bitchin Sauce,” all with proper kosher certification.

About one month later, my youngest daughter’s 18-year-old Israeli son also came to visit his American family. And once again, I was looking to share a memorable experience with a grandchild, albeit a shorter trip, closer to home due to his schedule constraints. Recognizing his appreciation for and knowledge of Israeli and world news and current events, politics, history, baseball — of course we went to a Yankee game and we ended up sitting in right field right, behind Aaron Judge — and his enthusiasm for seeing new places, I suggested a two-day trip to Washington, DC. He agreed without hesitation. I was 2 for 2.

The drive to and from DC took about four and a half hours. Once again, different upbringing, perspectives, and generations did not interfere in the ongoing, lively, and intelligent discussions in the car and throughout the trip. I was never bored, and neither was he. It was hot and quite muggy in DC, but he always made certain we both had water. I held his arm when we walked up and down the many steps of the Lincoln and the Jefferson memorials, and he always led the way, with me by his side, as he navigated the DC streets. When I waited for him in the library of the synagogue while he went in for evening prayers, he came down during a brief break to make certain I was all right. And although I had visited DC before, there was something so joyful in appreciating the historical sites through the curiosity and pleasure of an eager and excited new set of eyes. In no time at all, another priceless gift was mine.

I know, of course, that my boubie loved me. But the reality of our distinctly different lives would not have allowed such experiences, nor could either one of us have even imagined them. My mother also loved her grandchildren, but such shared trips were way out of her thinking box on so many levels. But I am the next-generation grandmother, who most definitely won the prize. While being wished mazal tov on the birth of a new grandchild, an acquaintance once told me that you only become a true “ben adom,” “a real human being,” when you are fortunate enough to become a grandparent.

We human beings, unlike animals, are the only ones who possess a loving and often remarkable connection to our grandchildren. How lucky can we get? The gift from the Almighty of a soul and grandchildren!

And to make our Arizona and Washington trips even more treasured, there were no bad dreams of losing each other, healthy food generally replaced the salami sticks, we laughed a lot, we shared a lot, and we learned more about each other’s lives. I feel confident that my grandsons were paying attention. And at the end of the day, I hope they will hold onto these loving memories always, and that they will see some of that “really something” quality in me that my brothers saw in our boubie so many years ago.

That would be the icing on life’s delectable and satisfying cake.