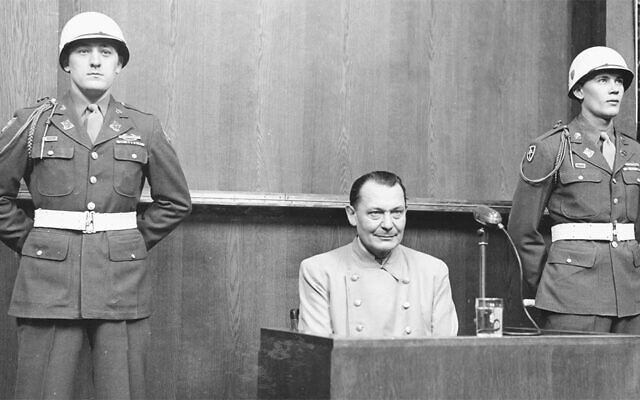 Surrounded by guards, Hermann Goering testifies during the Nuremberg trials. “The Interpreter” is about possible interactions between Goering and a young Jewish interpreter assigned to his trial. (Courtesy of the Robert H. Jackson Center)

The Theater Project in Union’s thought-provoking production of award-winning playwright Joseph Vitale’s “The Interpreter” will be live-streamed to mark both January 18, the National Day of Healing, and January 27, International Holocaust Remembrance Day.

TheTheaterProject.org is a leading incubator for rising talent and a showcase for New Jersey artists.

The play, a work of historical fiction, explores the complex relationship between Hermann Goering, a leading Nazi who was on trial for war crimes, and his interpreter, a 23-year-old Jewish U.S. Army private. It was inspired by the experiences of Richard Sonnenfeldt, the chief interpreter at the Nuremberg trials.

“The Interpreter” will be shown on Zoom on Wednesday, January 26, at 7:30 p.m.; school matinees will be held that day at 9 a.m. and 1 p.m. An open dialogue Zoom talkback with the playwright, actors, and director follows designated performances.

Mr. Vitale, the recipient of a 2021 fellowship in playwrighting from the New Jersey State Council on the Arts, said that although the play is about the Nuremberg trials, it also turns a mirror on ourselves. “At the same time that Allies were trying Nazis for crimes against humanity, prejudice and intolerance were rampant on our side,” he said. “What ‘The Interpreter’ does, I hope, is to remind us that the virus of hatred lies at the core of humanity itself. By recognizing that fact, and giving voice to it, perhaps we can assure that unspeakable acts won’t someday be perpetrated in our name as well.”