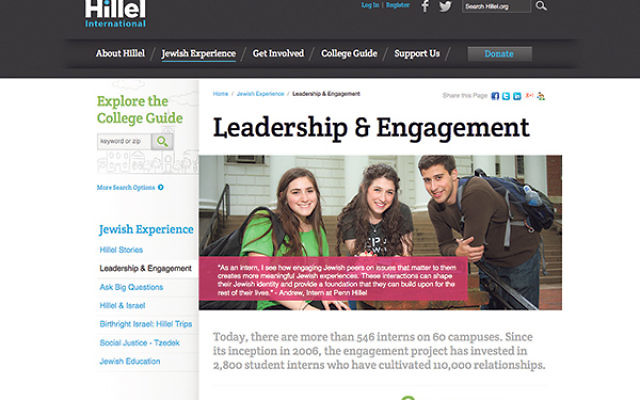 I spent this week on-line exploring “The Hillel Guide to Jewish Life at Colleges and Universities.” It’s as “hefty” as the Fiske Guide to Colleges I bought a few weeks ago.

In the Hillel campus guide, 948 colleges on several continents are included; of those, 803 have a Hillel. If that is overwhelming, the guide offers its own shorthand approach in the form of one major indicator: the Hillel top 60 list. Any school that makes the list — based entirely on self-reported Jewish population — gets a highly visible badge when it pops up. There are even two separate versions, one for public, the other for private universities. Of course, every school with a Hillel on site gets a second highly visible badge.

Plug in any school you can think of, and the website immediately spits out information. You’ll see whether the institution is public or private, what the total enrollment is (divided into undergraduate and graduate), and what the Jewish enrollment is. It will even tell you tuition — not that you ever want to see those large numbers.

In 1941, a small guide to 17 campus Hillels was published, and served as the precursor to the current guide. In 1955, B’nai B’rith started funding “Jewish Students and Student Services at American Universities” by Alfred Jospe, which continued through 1978. From 1981 to 1999, B’nai B’rith Hillel Foundation published a reformatted guide by Dr. Ruth Fredman titled “Hillel’s Guide to Jewish Life on Campus.” In 1995, Hillel published its own guide for the first time on-line, where it’s been ever since. Today, it’s the only one available and it’s the definitive guide, available only on-line, here.

I started by clicking on different schools to see what might come up. With only the haziest idea about what schools Junior will actually look at, or even be interested in, I decided to plug in whatever came to mind.

And then I worried: Should I automatically knock the ones without the badges off the list, no matter what?

Not so fast, said Matthew Berger, communications director at Hillel International. “We want prospective students and their parents to have a broad understanding of the Hillel presence on campus, so even if they don’t go to a school with a large Jewish presence, you can see that Hillel still has a presence,” he told me.

In other words, badges are not the only indicators of rich Jewish life on campus, or even of the particular wants and needs of a future enrollee.

Berger pointed out that the guide clearly tells its readers to look not just for a Hillel, and not just for top 60 status or significant Jewish population, but also for Jewish studies classes on campus, and even Taglit-Birthright trips to Israel.

“There are some very dynamic small Jewish communities that don’t make the top 60,” said Berger.

Moreover, he points to the Hillel College Guide magazine, which Hillel started publishing in June and will appear twice a year.

The whole purpose of the magazine, Berger said, is to “showcase the diversity of student life on campus and whet a student’s appetite to explore aspects of Jewish life and understand the wide range of services.”

The guide is also not meant to be one-size-fits-all. Rather, said Berger, it is designed “to start a conversation between parents and students” to help them figure out what kinds of Jewish activities to look for and discover which schools may have them.

In other words, it’s not just about kosher food and Shabbat services.

And of course, Berger encourages students to seek out the Hillel when visiting college campuses. But taking a tour is not enough. “Talk to the Jewish students there and learn about the different programs and opportunities there,” he urged, adding, “Numbers tell part of the story, but it’s really more about relationships and engagement.”

Okay. So I signed Junior up to receive the magazine. I have my doubts whether he will read it. Hmm: Do homework, play video games, go to ultimate Frisbee practice, play guitar and piano, or read a magazine about Jewish life on college campuses. Which comes in dead last?

But Berger is not deterred.

“There are a lot of hours in the back seat of the car on those college visits,” he said. Reading Hillel College Guide “is a great way to pass the time.”