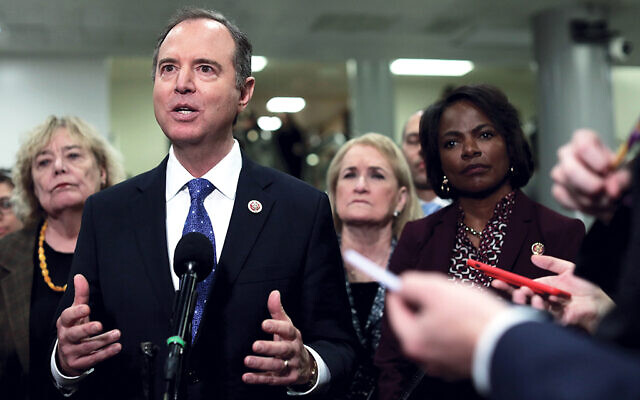 Rep. Adam Schiff of California is chair of the House Intelligence Committee and one of seven House impeachment managers. Getty Images

Despite the ravings of assorted anti-Semites, there’s nothing particularly Jewish about the impeachment drama unfolding this week in Washington. But our community has a huge stake in the Senate trial — not just in the legal outcome for President Donald Trump, but in how the process impacts a democratic system that remains the best protection for every vulnerable minority in an increasingly angry, intolerant nation.

The rule of law: It’s something politicians across the spectrum chant like a mantra. But like so many phrases that encapsulate momentous but complex ideas, it often seems like just another glib, empty slogan, part of the hard currency of partisan combat.

But it DOES mean something: It means that all of us — presidents and the folks next door — are accountable for our actions. It means a system with multiple safeguards to protect the rights of every individual. It means the processes laid out in the Constitution and the body of law over more than two centuries to protect the integrity of a surprisingly fragile democratic system.

We have no idea how the impeachment trial of Trump will end. If it plays out the way our founders intended, it will be an open legal process, with senators coming to a well-reasoned, fair conclusion based on the facts of the case and the demands of the law.

A serious trial, with senators weighing evidence and testimony in a sober, thoughtful manner, and a robust, evidence-based defense by the president’s legal team can strengthen our democratic system no matter what the outcome is for Trump. An impeachment trial fought mostly in the arenas of partisan politics and public opinion, or through raging tweetstorms from the White House, can only weaken the rule of law and undermine critical democratic and legal principles upon which all Americans, vulnerable minorities more than most, depend for their freedoms.

And, as we are already seeing, a rancorous impeachment battle fought outside the established judicial process will empower and energize the haters who inevitably return to the Jews as handy targets for their venom. It didn’t take long before the slimy underground of anti-Semites termed this impeachment as a “Jew coup,” capitalizing on the fact that  leading prosecutors of the case are Jewish — starting with Rep. Adam Schiff (D-Calif.), the House Intelligence Committee chair, who Trump said this week has “not paid the price yet” for his role as House impeachment manager, a comment  widely seen as a threat.

We are not judging Trump’s guilt or innocence; that’s not the job of the press, talk show hosts, or the proprietors of web pages that profess to know all the answers to every question. But history will judge members of the Senate harshly if they do not take seriously the constitutionally mandated responsibility to conduct an honest trial. If they fail, the magnificent structure of a democracy based on the rule of law will be in dire jeopardy. And so will every minority that relies on that structure for its safety and security.