File this under better late than never.

That is, if you have $4 million lying around. 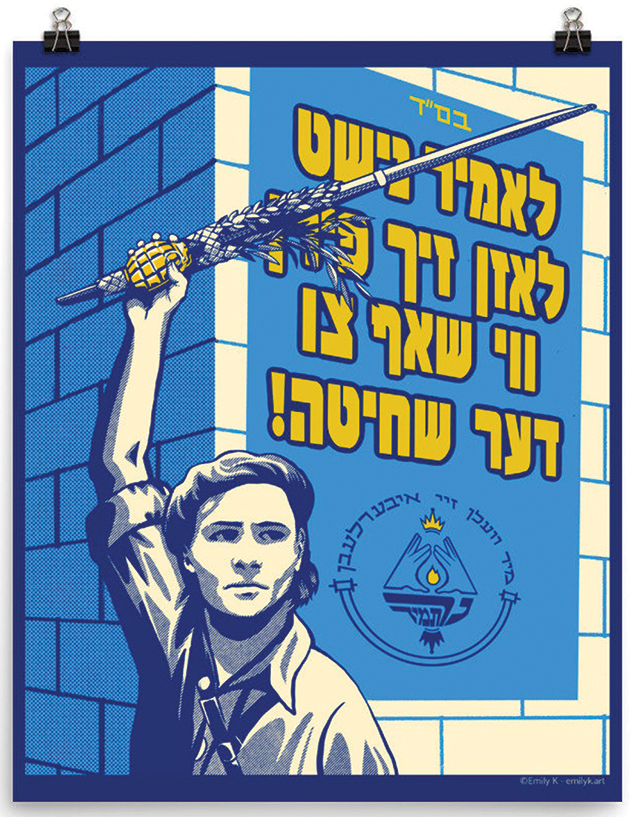 One of Emily Kesselman’s images of Jewish partisans

But there’s always next year, and the work of two young designers who just came to our attention are strong candidates for our collection of sukkah decorations, if not in 5782 then in 5783. In fact, you might even want to display their Jewish-themed art inside the house year round.

We discovered Emily Kesselman through a Yiddish language poster she created welcoming Afghan refugees to America. The poster borrowed the style and much of the Yiddish language text from an early 20th-century HIAS poster. That led us to her Etsy site — EmilyKShop — where we discovered the particularly sukkah-worthy print of a World War II Jewish partisan fighter brandishing a lulav and a hand grenade.

The poster behind her says in Yiddish “Let us not be taken like sheep to the slaughter!” 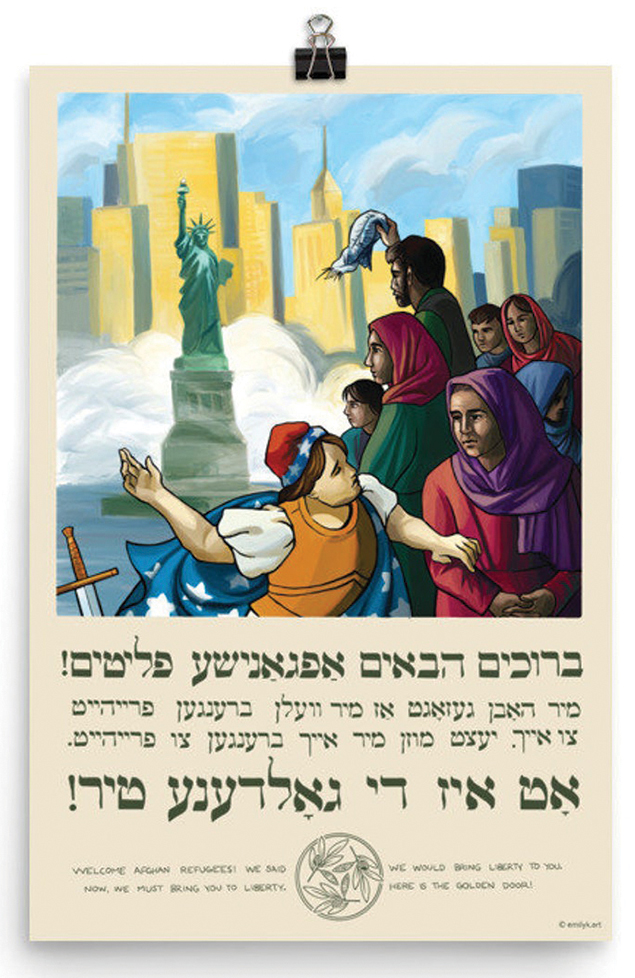 It turns out that Ms. Kesselman, a Philadelphia graduate of Temple University’s Tyler School of Art, is an accomplished comic artist whose work includes a trilingual cartoon, “Maimonides the Bridge,” that was exhibited in the National Liberty Museum’s “Caretoon” exhibition in 2015, as well as a yet unfinished Jewish fantasy graphic novel.

Rabbi Zac Kamenetz’s art re-envisions a more spiritual group of 20th-century Jewish heroes. The 14 images he uploaded to redbubble.com/people/Dirshuni feature 13 Jewish thinkers, ranging from Rabbis Abraham Isaac Kook, Abraham Joshua Heschel, and Zalman Schachter-Shalomi to the Hebrew poet Zelda, the Bible scholar Nechama Leibowitz, and the little known, highly influential mystic Madame Colette Aboulker-Muscat. In keeping with his position as founder of Shefa, a San Francisco-based nonprofit dedicated to “Building a Jewish framework for expanded states of consciousness & psychedelic therapy,” the images are colorful, trippy variations of classic and often monochrome photographs. These images are available in everything from stickers, postcard, and notebooks, to iPhone covers, wall posters, and canvas prints.

Given the tradition of inviting spiritual guests into your sukkah, these images make perfect holiday decorations. Sadly, they’re not available in the format that would make them most versatile and useful in your sukkah — you can’t get them as shower curtains.