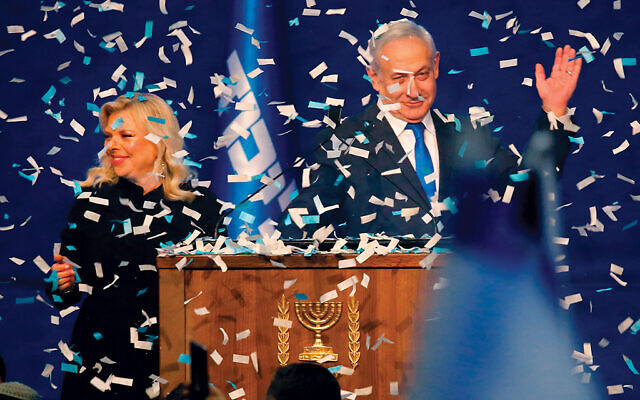 It took 11 months and three elections, but Israelis have finally handed a candidate an apparent path to create a sustainable government. That the candidate is Benjamin Netanyahu is a testament to the resiliency of Israel’s longest-serving premier and a sign that a wary relationship between Israel and much of the diaspora is not going to become stronger anytime soon.

For the Jewish minority in this country that supports annexing the settlements and the Jordan Valley (as envisioned under President Donald Trump’s Middle East plan) and that in general sees a two-state solution as folly, the election results are very good news indeed. Over much of his current tenure, which began in 2009, Netanyahu preferred to govern as a pragmatist, leaving the hardcore ideological language to various coalition partners and ministers. This time, he ran as a leader intent on settling the country’s borders and winning a culture war against Israel’s “elites” in the media, academia, and the courts.

Clearly, this distinct vision proved attractive to more Israeli voters than the vague platform of Blue and White, the rival party of Benny Gantz, which couldn’t seem to articulate a message any clearer than “just not Bibi.” Netanyahu also capitalized on his close relationship with an ideologically aligned Trump, which bolstered the argument that Netanyahu is the “indispensable man” when it comes to the world stage.

Gantz was no leftist, and the dismal showing of the Labor-Gesher-Meretz alliance showed once again that Israel’s left is on life support. Still, the majority of American Jews continue to support the assumptions of the left-wing agenda, especially in supporting a two-state solution. In addition, the majority of American Jews support the Democrats, while Netanyahu and perhaps most Israelis consider Trump a true friend: That is a formula for distancing between the world’s two largest Jewish communities. The relationship is being further tested here at home by the surging candidacy of Vermont’s Sen. Bernie Sanders. The vociferousness with which he criticizes Netanyahu and his tolerance for anti-Israel surrogates is deeply alienating to Jewish moderates, who may otherwise share his personal views on a secure Israel and a just resolution for the Palestinians.

Some American Jews might have been quietly pulling for Gantz if for no other reason than to forestall the spectacle of Netanyahu beginning his latest term as a defendant in a corruption trial, or undermining the legal system through political machinations. Either possibility is an unhappy prospect for advocates of the Middle East’s only real democracy.

The results of Israel’s latest election aren’t much of a surprise, and only confirm trends that have been in place for years. For many, if not most, American Jews, supporting Israel means loving its land and people even when disappointed with its political leadership; focusing on the everyday miracle of a robust democracy and thriving economy while fretting about the long-term prospects for peace. The election doesn’t change that — nor does it offer much hope for a closer alignment of the majorities here and in
Israel.