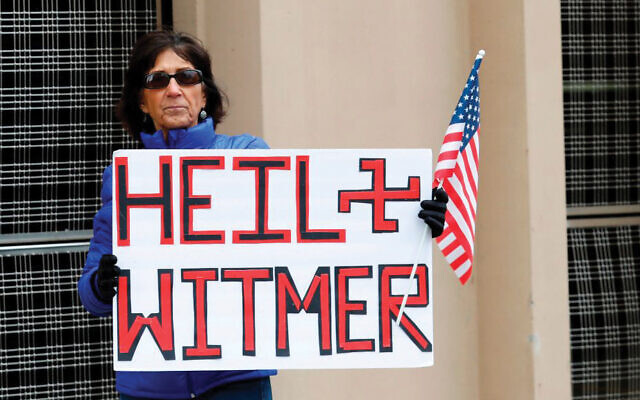 A protestor last week in Lansing, Mich., who compared Gov. Gretchen Whitmer to a Nazi for extending the state’s lockdown orders. JEFF KOWALSKY/AFP via Getty Images

It was the sort of thing that sets Jewish teeth on edge. Some of the signs displayed at the recent protests against the restrictions that have been imposed on citizens in order to halt the spread of the coronavirus referred to Michigan Gov. Gretchen Whitmer as a “Nazi.”

In the context of the rising tide of anti-Semitism that has swept across the globe in recent years, the “Heil Whitmer” and swastika posters carried by demonstrators were quickly interpreted by some as not merely inappropriate — as is the case with virtually all analogies that reference the imagery of the Holocaust — but also linked to conspiracy theories circulating that claim the pandemic was a Jewish plot.

Like virtually other major crises, anti-Semites have seized upon Covid-19 in order to spread hate. Yet these far-right extremists aren’t alone in seeing the coronavirus as evidence of Jewish perfidy. The same elements in the Arab and Muslim world that have been spewing blood libels and canards about Zionist plots for decades have done the same with the virus. Even as Israel and the Palestinian Authority (PA) were being praised by the United Nations for working together to combat the contagion, Israeli TV reported that PA Prime Minister Mohammed Shtayyeh was claiming that Israeli soldiers were intentionally spreading Covid-19 in order to harm Palestinians.

The practice of blaming Jews for the ills of the world goes back to ancient times and led to mass murder during the 14th-century “Black Death” pandemic. So it is hardly surprising that the diverse range of contemporary anti-Semites are operating out of the same playbook.

But the images of gun-toting, Confederate flag-waving demonstrators comparing politicians that have imposed pandemic lockdowns to Nazis have short-circuited a more fundamental debate about the tradeoffs between civil liberties and emergency measures aimed at saving lives.

Concerns about giving government too much power over our lives are not confined to extreme right-wingers in the United States. In Israel, so-called “black flag” demonstrators have chafed against the even more extreme
lockdown orders imposed by Prime Minister Benjamin Netanyahu’s government. Just as the American anti-lockdown movement is mixed up with the arguments for and against President Donald Trump, a lot of the anger about the pandemic counter-measures in Israel has been conflated with the movement to oust Netanyahu from office.

It’s easy to dismiss those seeking to defend the sale of firearms or holding mass prayer meetings during a pandemic as crackpots. Yet, regardless of your feelings about guns, mega-churches, or Netanyahu, in most circumstances, they’d be right.

The essential purpose of any government should be to defend individual rights. Placing the kind of power required to enforce the lockdowns in the hands of any government is a scary business. That’s especially true when they involve electronic surveillance of those with the virus.

The calculus by which one can trade rights for security is always hard to discern. In most cases, the tradeoff isn’t worth it. But the current emergency is proof that sometimes one must make such difficult decisions.

Suffice it to say that when the exercise of one’s individual rights — whether it is to buy a gun or attend a church service, a minyan, or a wedding — directly endangers the rights of others to life and liberty by potentially spreading the coronavirus, they can be overridden.

The law has always recognized some limits to the exercise of the First and Second Amendments. After all, Abraham Lincoln suspended the Constitution to defend the Union and ultimately abolish slavery. Yet here Jewish religious law also has something to teach us. The principle of “pikuach nefesh” — literally, “saving a soul” — enables the breaking of almost all laws in order to save lives. This principle cannot be twisted to support permanent abridgement of rights and liberty. Yet the efforts to prevent a public health catastrophe must in certain limited instances take precedence.

Once the danger passes, we can have a spirited debate about whether pandemic counter-measures were inadequate or an overreaction that caused as much if not more harm as good. We can also then assess who deserves blame for the impact of the disease and whether anti-Semitism tainted the debate about government overreach.

In the meantime, if giving up some of our liberty to congregate is truly the difference between life and death for those who are most vulnerable to the disease, such as the elderly and those who already have respiratory illnesses or are immunocompromised, then that is a price that must be paid.

Jonathan S. Tobin is editor in chief of JNS.org and a columnist for the New York Post and National Review. Follow him on Twitter at: @jonathans_tobin.