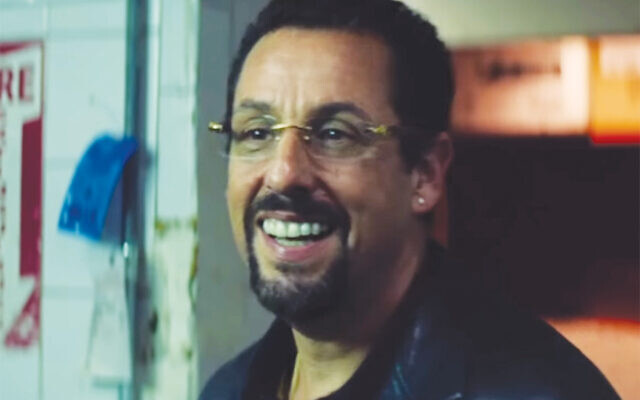 Sandler as Howie Ratner in “Uncut Gems.” Via YouTube/A24

Comedian, movie star and film mogul Adam Sandler gave a rare interview to The New York Times Magazine on Sunday, and in many ways it is a close examination of Sandler’s Jewishness. As its author, Jamie Lauren Kelles, explained, “I grew up as a Jew in a not-very-Jewish place, and Sandler’s work meant a lot to me.”

• Sandler is a member of Hillcrest Country Club, “the oldest Jewish country club in Los Angeles,” “a place where self-proclaimed ‘Jewish big shots’ could unwind in semiassimilated fashion.” Sandler offers a tour of the Jewish comedians and other role models whose photos line the walls.

• Sandler’s upcoming film, “Uncut Gems,” is a serio-comic deep dive into the “shtetl of the New York diamond district.” Sandler plays Howard Ratner, “a jeweler to the stars who earns his nut hawking diamond-studded novelties to rappers and pro ballers.”

• “Uncut Gems” is the work of Josh and Benny Safdie, and the character of Ratner is partly based on the directors’ father — a Sephardic Jewish emigrant from France — and their father’s boss at a diamond business on West 47th Street.

• The after-party for the movie premiere was held at Katz’s Delicatessen on the Lower East Side.

• Kelles insists that, “Nearly every Adam Sandler character is Jewish, though if you aren’t Jewish, you might not even notice.” Growing up in Manchester, N.H., Sandler had a “standard Jewish-American upbringing: Hebrew school, J.C.C. basketball, a bar mitzvah.” His older daughter’s bat mitzvah was held at Hillcrest, with entertainment by Adam Levine of Maroon 5. “It’s more about tradition,” Sandler says of his Jewish identity. “Remembering history, making sure that you have pride.”

• Bonus fact: Sandler, despite playing a man-child in many of his best-known comedies, is a family man: “Movies shoot in summer, so he can bring his kids to set. During the year, the workday is arranged to allow him to drop them off at school and pick them up.”