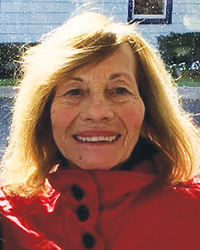 Mrs. Landy worked as a paralegal supporting her husband while he attended law school. She worked for many years at the United Nations headquarters in New York City as a leader in the Jewish NGO Caucus. In 2014, she was elected secretary of the World Jewish Congress.

She was the first woman president of Congregation B’nai Israel in Rumson and remained very involved in all aspects of the synagogue, most particularly youth education, throughout her life.

She served as president of the New Jersey Poetry Society for several years.

Predeceased by a grandson, Avrohom Landy, she is survived by her husband of 62 years, Eugene; three sons, Samuel (Laurie), Michael (Tassana), and Richard (Tzipporah); a brother, Leon Sadoff; 10 grandchildren; and a great-grandson.

Memorial contributions may be made to World Jewish Congress.