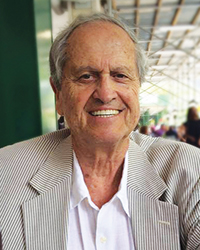 He studied forestry at Penn State University, inspired by summers working at the family lumber yard, before shifting to medicine. He received his M.D. from University of Amsterdam in 1957. He began a residency in orthopedic surgery in Newark and Orange.

He joined the U.S. Air Force and was stationed as a medical officer in Prum, Germany, eventually reaching the rank of captain and commanding the base hospital.

He is survived by his wife, Rosalie, whom he married in 1966; his son, David (Michaela); his daughter, Sara (Bryan); and three grandchildren.

Graveside services were held April 17; a memorial will be held at a later date. Memorial contributions may be made to Daughters of Israel, West Orange.