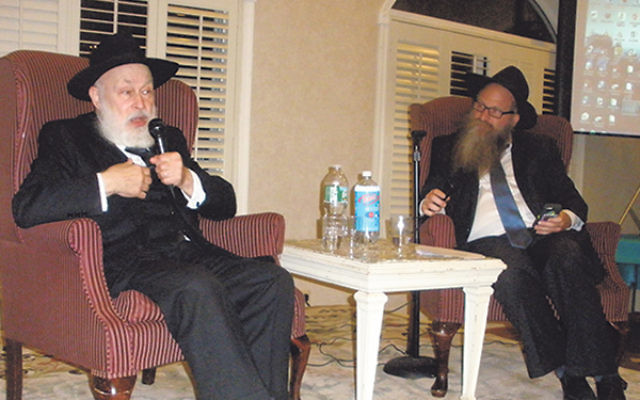 Rabbi Yehuda Krinsky, left, former secretary to the Lubavitcher Rebbe, said he feels the thousands of Chabad emissaries worldwide are extensions of the Rebbe; he was interviewed by Chabad of Western Monmouth County’s Rabbi Boruch Chazanow.  &nb

Rabbi Menachem Mendel Schneerson, who died in 1994, was so tech savvy for his time, reported Krinsky, his longtime secretary, that he had a car phone installed as soon as the technology became available.

Krinsky spoke June 18 at Chabad of Western Monmouth County in Manalapan commemorating the 21st yahrtzeit of the leader of the Chabad-Lubavitch hasidic movement.

“Can you just imagine the Rebbe on social media?” mused executive director Rabbi Boruch Chazanow, who interviewed Krinsky for the program.

Their talk touched on the ways Chabad has integrated technology in their outreach efforts; indeed, the 130 attendees were asked to text their questions to the cell phone of adult education director Rabbi Levi Wolosow.

Krinsky said Schneerson, who was educated in science and mathematics at the University of Berlin and the Sorbonne in Paris, would use a computer when they came on the scene late in his life. Yet the Rebbe insisted on opening all of the many hundreds of letters that arrived daily himself — he was a “speed reader” who could digest a letter in seconds, said Krinsky — so as to be able “to see the tears” with which each envelope was sealed.

Schneerson took over the leadership of the Chabad Lubavitcher movement from his father-in-law, Rebbe Yosef Yitzchok Schneerson (both descendants of the Tzemach Tzedek, the third Chabad Lubavitch Rebbe), in 1951, a year after the elder Rebbe’s death.

Under the younger Schneerson, Chabad grew into a force within the Jewish world, sending shluchim, or emissaries, to the far corners of the world to provide outreach to Jews who had become disconnected from their roots.

Although he worked long hours into the night at Chabad-Lubavitcher world headquarters in Crown Heights, Brooklyn, the Rebbe made it a point to spend 15 minutes each day having tea with his wife, Chaya Mushka, even if he returned home at 3 a.m.

When she died in 1988, Schneerson soon left their home and moved a bed into his office, where he lived the last years of his life. He told Krinsky “he was missing joy in his life.”

Krinsky was sent in 1946 to Brooklyn from Boston by his parents to attend the Chabad-Lubavitcher school.

Ironically, it was his driving skills that brought him to the attention of Schneerson. Because he had a driver’s license, something of a rarity especially in New York City in those days, Krinsky became the Rebbe’s driver.

Krinsky recalled missing his own engagement party because Schneerson, whom he had taken to visit a boys’ camp in the Catskills, unexpectedly decided he should also visit a girls’ camp. When Krinsky dropped the Rebbe at his house, Krinsky said, he found his brother-in-law waiting to drive him to the party. Unfortunately, it was 11:30 p.m. and the guests had left.

His future wife showed understanding. “She was proud as a peacock,” said Krinsky. “We had the party the next night.”

Without a job as his wedding date approached, Schneerson offered Krinsky the role of public relations representative, he said, adding, “There was no such thing at the time, as if I even knew what public relations was.”

Krinsky became so close to the Rebbe that after Chaya Mushka died, Schneerson asked him to be the executor of his will.

When Schneerson began sending out shluchim to reach unaffiliated Jews in the 1950s, people viewed it as a lost cause.

“Today it has become stylish and very successful,” said Krinsky; more than 3,000 Chabad centers and more than 5,000 shluchim are operating worldwide.

They are also perhaps the reason why Schneerson, who died at age 92, was the last Lubavitcher rebbe. ”I feel the shluchim are an extension of the Rebbe,” said Krinsky.