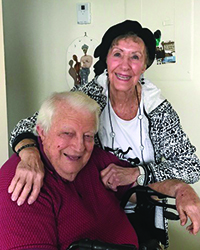 Joseph “Joe” and Adele Weinberg of Deerfield Beach, Fla., died eight days apart, the week of their 63rd wedding anniversary. They raised their family in Essex County and spent the past 30 years in southern Florida.

Adele Selma Fine Weinberg, 94, died March 19, 2020. She grew up in New York but spent most of her adult life in Essex County, moving to West Orange after her marriage in 1957.

Mrs. Weinberg worked for years as a bookkeeper at Temple Emanu-El in Livingston, where the couple were members.

She played tennis into her 80s.

Joseph Weinberg, 102, died March 26, 2020. He grew up in Montclair and graduated from Rutgers University. He had a varied career as a public accountant, retiring in 1983 after working for 19 years as a wine specialist for Heublein.

He served with the U.S. Naval Air Corps during World War II, and was stationed in Natal, Brazil, for three years.

He had served as first vice president of Temple Beth Am in Verona.

He executed many forms of creative art, including stone and clay sculpture, and took part in theater performances. He performed as a vocalist with a band in high school; joined the Livingston Players as an adult; and appeared in numerous off-Broadway productions. After he moved to Boynton Beach, he was a charter member of T.A.G. (Theater Arts Group), appearing in each of their productions for 19 years.