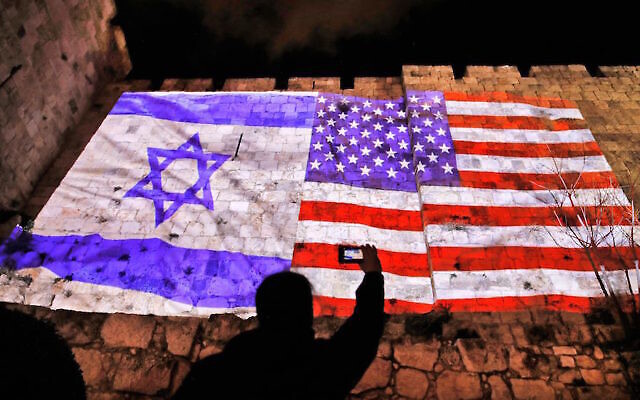 Illustrative: The U.S. and Israel flags on the walls of the Old City in Jerusalem, Dec. 6, 2017. Getty Images

The bonds between U.S. Jews and Israel may be stronger than many feared.

That’s the takeaway from a new survey of 2,500 Jewish adults conducted by the Mellman Group for the Ruderman Family Foundation. The survey found that 80 percent of respondents identified as “pro-Israel,” and 67 percent said they were emotionally “attached” or “very attached” to the Jewish state. Furthermore, over 70 percent of U.S. Jews feel that their personal relationship with Israel stayed the same or grew stronger over the past five years — a period that included tensions over religious pluralism in Israel and a divide between American Jewry’s liberal majority and Israel’s hawkish government.

The survey also said that liberal Jews feel less attached to Israel than those on the right, though the bonds have hardly broken, and 57 percent of U.S. Jews said they are “pro-Israel but also critical of Israeli policy” (compared to 23 percent who support the current government’s policies).

The results, said Jay Ruderman, president of the Ruderman Family Foundation, show that “doomsday talks about an irreversible chasm between Israel and the American-Jewish community were mistaken.” Apparently love takes many forms, and can survive — and sometimes grow — when partners disagree.