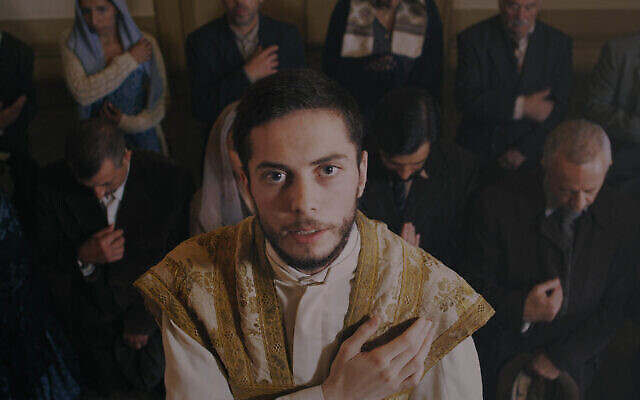 Actors portraying Portuguese Jews in the film "Sefarad," which was shot in 2018 in Porto, Portugal. Courtesy of the Jewish Community of Portugal/JTA

Who is a Jew? What is authentic, exactly, when it comes to Judaism? And, can communities of different kinds of Jews coexist?

These are questions raised by a curious independent film I came across recently on Amazon Prime Video. “Sefarad” is a 2018 Spanish docudrama directed by amateur filmmaker Luis Ismael, with a script written by the Center for Historical Research of the Jewish community of Porto, Portugal. It tells the story of Arthur Carlos de Barros Basto, a real-life army captain in 19th-century Portugal who converted to Judaism after discovering he had Jewish ancestors. The movie documents his attempt to build a community there, as he fights for the Jewish legitimacy of a Marrano population the other Jewish leaders rejected; in the process, he questions the Jewish establishment’s authenticity and ability to adapt.

However inartful, “Sefarad” is full of rich symbolism and it raises questions that the Jewish community is still asking today, in Israel and the diaspora.

The film follows the captain, a uniformed and decorated war hero, in a series of meetings — so many meetings — with stern men with long beards and even longer coats. The serious men — with their arcane rules and regulations about who is considered a Jew and therefore who has access to all the privileges that come along with that — could easily be stand-ins for the Israeli Chief Rabbinate.

These meetings capture a buzzword much bandied about these days: “Ashkenormativity.” The men’s dress reflects the Ashkenazi cultural norms that a wider society sees as “Jewish.” Herring, kugel, and bagels are Jewish; lachmagine, kubbeh, and Khachapuri are not.

As a Marrano, the captain’s “Jewishness” is constantly being tested, his ritual practice always on probation. A few establishment community members visit Basco and his family for Shabbat dinner to try to tease out whether, in their view, they are adequately Jewish. The Bascos are asked to recite the blessing on the candles, and utter it in a way familiar to this viewer’s ears, but the guests inform the family that they recite it differently. Upon request, the community leaders reciprocate with their version. They open their hands and chant a prayer in Judeo-Portuguese. 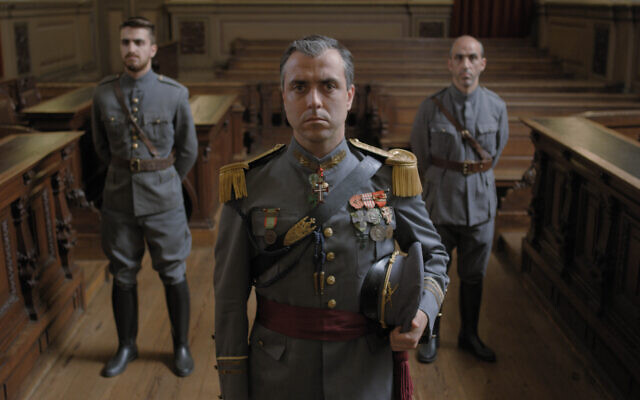 A still from the film “Sefarad,” which was shot in 2018 in Porto, Portugal. Courtesy of the Jewish Community of Portugal/JTA

Capt. Basco responds in defense of his Jewish practice and the wider goal of building a Marrano community. “What unites us is far greater than what divides us,” he says, staking a claim for a multicultural Jewish community whose hallmark is diversity.

In another scene, three rabbis debate about whether, and how, to respond to Basco’s project of building a Portuguese Marrano community and whether, and how, the group should be integrated into the existing Jewish community. Two rabbis seem excited by the prospect. One, unsurprisingly, disagrees.

The opposing rabbi says, “It’s romantic, quite wonderful, that people still pray to God. Families that endured the edict of expulsion, all that. But frankly, we are not talking about Jews. We should make a distinction between Crypto-Jews and Marranos. Crypto-Jews are when Jews have been persecuted and had to hide their Judaism. Marranos are those simply ignorant of their Judaism.”

The opposing rabbi continues: “They’ve abandoned their practice years ago. What they practice is not Judaism, but Marranism. It has little to do with Judaism. It’s similar to Judaism. Marranos will never adapt” to “Judaism as we practice it. The Marranos wish to fulfill their religion, not the rigorousness of our religion: mikvah, Shabbat, fasting.”

The casual rejection of the Marranos’ Jewishness, with its differing values and practices, sounds eerily similar to what some observant Jews say about the less observant. It also reminded me of the biting joke said about Lubavitchers — that they practice the closest religion to Judaism.

The rabbi in opposition also complains that no one can guarantee that the Marranos’ matrilineal descent is not broken, which is an argument brought up to bar the citizenship of many newcomers to Israel.

“Marranism has little to do with Judaism,” he says. “They will never understand that we’re adapted to the strict requirements of our religion, our culture, and our history.” Gatekeepers define what is and isn’t Judaism in a narrow way, walling off those inside the tent from those outside of it.

The film is often confusing because it’s unclear who all the characters are and what the implications of their decisions will be. Yet the film tells an important tale and raises many questions we still face as a community today. And speaking of “Ashkenormativity,” it pairs well with a plate of herring and a glass of schnapps.

Eli Reiter is a teacher and writer and host of the Muslim-Jewish storytelling series.