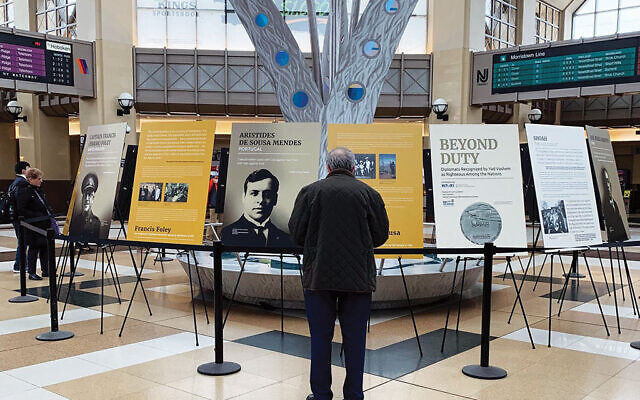 A Yad Vashem exhibit on diplomats in Europe who saved Jewish lives during the Holocaust is on display through Feb. 19 at the NJ Transit station in Secaucus. Photos by Johanna Ginsberg

On display at the center of the Frank R. Lautenberg Rail Station in Secaucus Junction terminal, an area which 26,000 commuters crisscross every day, is an exhibit on eight diplomats who risked their jobs, their positions, and their lives to rescue Jews in Europe during the Holocaust.

“Beyond Duty: Diplomats Recognized by Yad Vashem as Righteous Among the Nations,” the first exhibit to be staged in the space, features large panels describing the heroism of these brave men who, among their actions, provided passports, visas, and travel permits, contrary to the policies of their respective governments, to thousands of Jews.

The exhibit was planned well before the anti-Semitic shooting in nearby Jersey City on Dec. 10, 2019, in which three people were murdered at a kosher grocery store and one detective was shot dead before the attack. Still, the eerily coincidental timing was not lost on the speakers at the opening ceremony on Feb. 5.

“New Jersey is facing a rising tide of hate and anti-Semitism, which culminated in the horrific Jersey City attack only two months ago,” said N.J. Secretary of State Tahesha Way. “At the same time, New Jersey’s great strength is her diversity, because it is through our diversity that we can embrace, unify, and stand together, especially in support of our sisters and brothers in the Jewish community.”

Way said that “Our commitment to remembering the Holocaust in New Jersey is steadfast,” and that “Hate has no place here.”

Each of the men profiled in the exhibit has been designated as Righteous Among the Nations by Yad Vashem in recognition of non-Jews who risked their lives to save Jews during the Holocaust. In total, about 27,000 people have been so designated, among them 36 diplomats. Of the diplomats based in France was Vladimír Vochoč, the Czech consul in Marseilles who was arrested in 1941 by the French police for issuing passports to Jewish refugees. He was later charged with treason and served more than seven years in prison.

Aristides de Sousa Mendes, Portugal’s consul general, was based in Bordeaux. He issued transit visas to all the Jews in need in 1940, and as a result lost his position and his livelihood; he was ostracized for his actions and died penniless.

Sebastián de Romero Radigales, head of the Spanish diplomatic delegation in Athens, Greece, in direct opposition to his government’s explicit policy, ensured the survival of hundreds of Jews by repatriating them to Spanish Morocco. 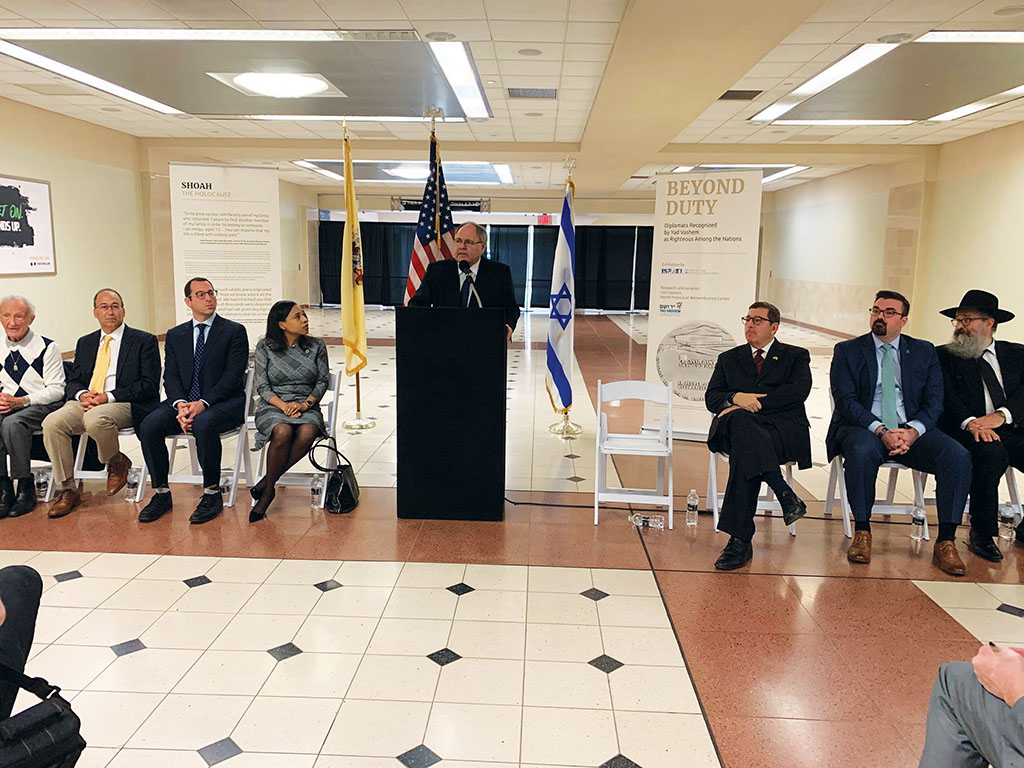 Others in the exhibit include household names like Raoul Wallenberg of Sweden and Chiune Sugihara of Japan, and the lesser known Captain Francis Foley of the United Kingdom, Georg Ferdinand Duckwitz of Germany, and José María Barreto of Peru.

The men featured in “Beyond Duty” were selected to reflect the diversity of those who aided rescue efforts, according to Adva Vilchinski, consul for public diplomacy at the Consulate General of Israel.

“The message is that in the darkest hour of humanity, there were people —different people, from different backgrounds, and different countries — that risked their lives,” Vilchinski told NJJN before the ceremony. Some lost their jobs, she noted, and some lost their lives.

About 50 people attended the opening ceremony held at the terminal. Dani Dayan, Israel’s Consul General in New York, underscored the close relationship between Israel and New Jersey, and offered lessons to be learned from history, and the exhibit.

“When the scourge of anti-Semitism, the scourge of hatred, raises its ugly head, we have to act courageously and immediately,” he said, adding, “Only the existence of a robust, secure, strong, independent Jewish state in the land of Israel can guarantee that the phrase ‘Never Again’ is not the shallow slogan, but a reality.”

The exhibit is a partnership between the Israeli Consulate in New York and the State of New Jersey, with support from NJ Transit; it was created at the initiative of the Israel Ministry of Foreign Affairs in partnership with Yad Vashem.

“Beyond Duty” was first exhibited in the United Nations lobby in 2019 to mark International Holocaust Memorial Remembrance Day, and was sponsored by the permanent missions to the UN of Israel, Peru, and Portugal. Since then identical exhibits have been placed in more than 70 countries. It will be on display in Secaucus Junction until Feb. 19.

On opening day, commuters were stopping to take in the exhibit on their way from here to there. Brief, accessible, and to the point, it can be taken in in its entirety in under half an hour and offers a positive message about humanity, even in an age plunged into moral darkness.