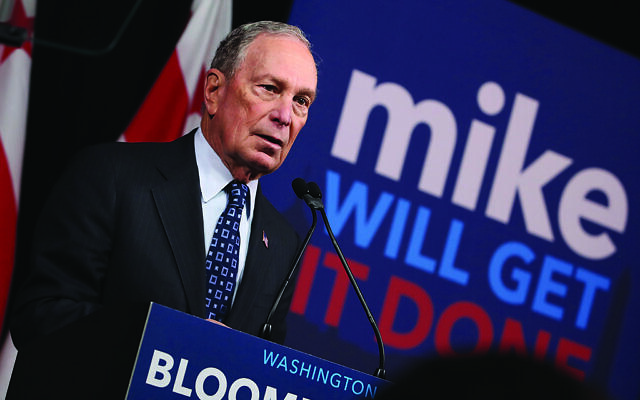 Mike Bloomberg on the stump last week before a Jewish audience in South Florida. Getty Images

When Abigail Pogrebin, director of Jewish outreach for Mike Bloomberg’s campaign, called Rabbi Yehuda Sarna and asked him to support Bloomberg for president, it was a very short conversation.

“She started trying to sell me on the campaign,” said Sarna, the executive director of the Bronfman Center for Jewish Student Life at New York University. “I was like, ‘You don’t have to sell me on it, I’m there, I get it.’”

It’s an experience that Pogrebin, a writer (her book “My Jewish Year” was a finalist for the 2018 National Jewish Book Award) and frequent moderator at Jewish events, said she’s had with a growing number of Jewish leaders over the past few months since she joined the campaign in November.

When the campaign announced its United for Mike coalition of Jewish supporters last month at a JCC outside of Miami, it unveiled a long list of Jewish supporters known for their affiliations with moderate or centrist organizations like the American Jewish Committee, UJA-Federation of New York, and the Anti-Defamation League. It’s a group that is less typically associated with Democratic primaries than with calls for civility and moderation — which is exactly why its members say they are supporting Bloomberg.

“I’m hyperexcited to support a candidate who induces calm,” said Sarna. “I know it sounds ironic, but I’m wary of more revolutionary candidates.”

As the presidential primary season finally kicks off with Iowa this week, many centrist and moderate Jewish Democrats are lining up behind Bloomberg. It’s not just that they think he has the best shot at beating President Donald Trump, or that he’d be the first Jewish president. They’re looking to Bloomberg, a billionaire, philanthropist, and former three-term mayor of New York City, to represent their vision of competent leadership and respectability.

“What Mike offered in the instant when he declared was a path back to competence and away from chaos,” said Pogrebin.

“It’s a very menschlich campaign,” said Sarna. “The people who are working on the campaign are very good, very smart people.”

A number of supporters pointed to Bloomberg’s reputation for getting things done. They contrasted his more soft-spoken approach to politics to Trump, whom Bloomberg has made his main focus in advertisements, largely ignoring other Democrats (just as he has ignored the usual path to the nomination that focuses on early voting states).

To Alisa Doctoroff, a past president of UJA-Federation of New York, Bloomberg “managed to actually get government to do things, and I think this is an era when people are skeptical about government being able to do things.”

When asked why she was not supporting some of the other moderate candidates, Doctoroff pointed to Bloomberg’s experience in business, government, and philanthropy as the right match for what she called the “overwhelming problems” facing the country. “Mike has the experience,” she said. “I think he gets things done, I think he is a uniter, I think he is practical, I think he is someone who makes government work.”

Schonfeld noted some of Bloomberg’s policy priorities, many of which match up with wide swaths of the Jewish community. “He’s been an incredible leader on things that matter to me the most — climate change, gun violence, women’s rights,” said Schonfeld. “He’s never wearied and never stepped back.”

Explaining Bloomberg’s appeal to centrist Jews, Sarna said that centrist organizations have “suffered over the last five years since the last campaign because the polarization has been ripping apart institutions like that…. In a way this is kind of the revenge of the center.”

Steve Rabinowitz, a Democratic political consultant in Washington, D.C., and a former director of Jewish outreach for Bill Clinton, said he recently began “flirting” with Bloomberg after supporting Joe Biden for much of the primary. “It’s a very impressive list for this early in a campaign,” he said of Bloomberg’s Jewish supporters. He pointed out that while Bloomberg’s Jewish supporters from New York might be better known, “moderate” candidates like Pete Buttigieg and Biden boast their own high-profile Jewish supporters from other states. “But maybe it’s a touch deeper than that because [Bloomberg] has so many institutional Jews.”

“His list is a little New York-heavy, but that’s understandable — he was New York mayor. It might also be a little Florida-heavy,” said Rabinowitz. “But over the years New York becomes Florida.” 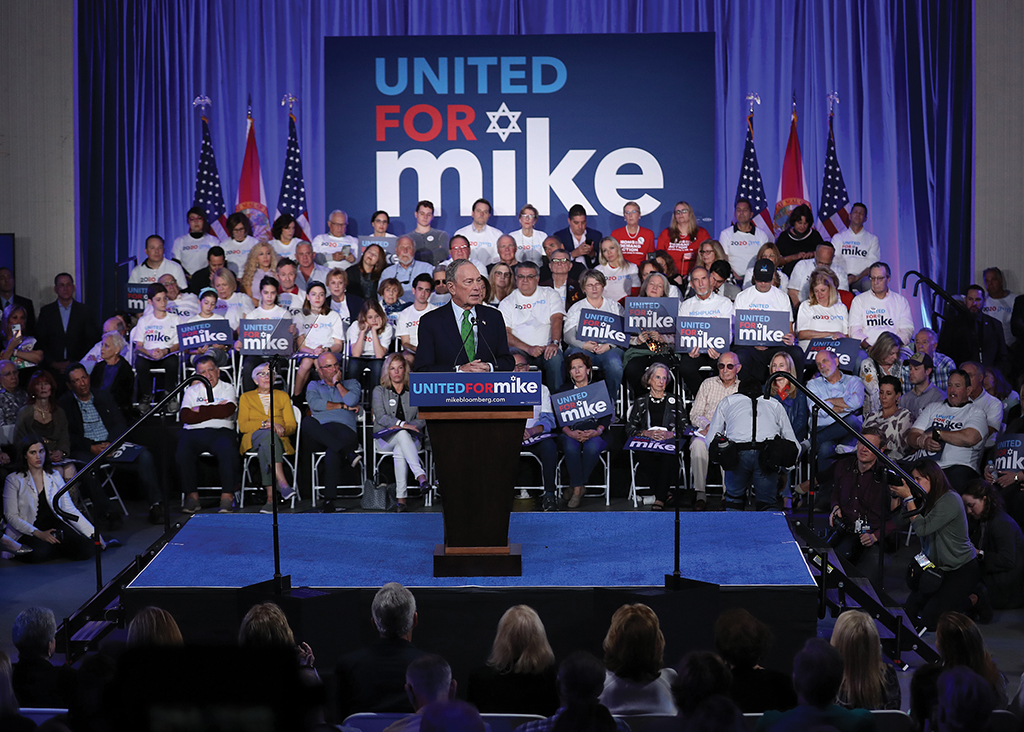 Pogrebin’s hiring in November made Bloomberg the first candidate to hire a director of Jewish outreach. Bernie Sanders followed with the hiring of Joel Rubin, a former Obama administration official and a co-founder of J Street, earlier this year. It’s a sign of the importance the Bloomberg campaign places on Jewish voters, who could be an electorally significant constituency for the former mayor. Jews made up 4 percent of voters in Florida, a significant state in the general election, and 6 percent of New York’s electorate in the 2016 presidential race. Florida’s primary will take place on March 17; New York’s will be held on April 28 and New Jersey’s on June 2.

At the United for Mike kickoff event in Florida, Bloomberg spoke about his Jewish roots in an unusually personal speech for the typically guarded mayor. He touted his support for Israel while noting that he would seek to re-enter the Iran nuclear deal. “As president, I will always have Israel’s back,” he said. He made a jab at his fellow Jewish candidate for president, Bernie Sanders — “I’m not the only Jew running for president, but I am the only one who doesn’t want to turn America into a kibbutz” — and addressed rising anti-Semitism, placing some of the blame on Trump while noting that anti-Semitism can be found on both the right and the left.

He also pledged to designate anti-Semitic hate crimes as domestic terrorism, expand anti-bullying education programs, and increase funding for the FBI’s civil rights program. (Bloomberg is not the only candidate to lay out a plan to fight anti-Semitism. Buttigieg, Elizabeth Warren, Sanders, and Biden have all addressed anti-Semitism and proposed policy
responses.)

Of course, questions remain about Bloomberg’s chances in the campaign, which he entered in November — months if not years after other Democrats had begun hitting the trail. A major area of concern is his low support among black voters, a key Democratic constituency. Bloomberg apologized in November for his controversial stop-and-frisk law enforcement policy, in which black and Latino men were disproportionately pulled aside on the street for random searches; few guns were confiscated. But in a Washington-Ipsos poll conducted Jan. 2-8, only 4 percent of black respondents said they would vote for Bloomberg if the primary were held that day.

While many of his Jewish supporters said they did not approve of stop-and-frisk, they were happy he apologized for it. “It did a lot of damage, there’s no question, I think that will continue to be the biggest point of his primary campaign,” said Sarna. “But I think he did the right thing by coming out to apologize.”

Even apart from his low support among black voters, Bloomberg’s path to victory is far from certain. But Pogrebin says his recent rise in the polls — Bloomberg has jumped to 8.8 percent in FiveThirtyEight’s national polling average, nearly 2 points ahead of Pete Buttigieg — has left fewer questions in that realm. “The main question people have is they want to know how he wins,” said Pogrebin. “In the last week, I’m not having to answer that question so much anymore.”