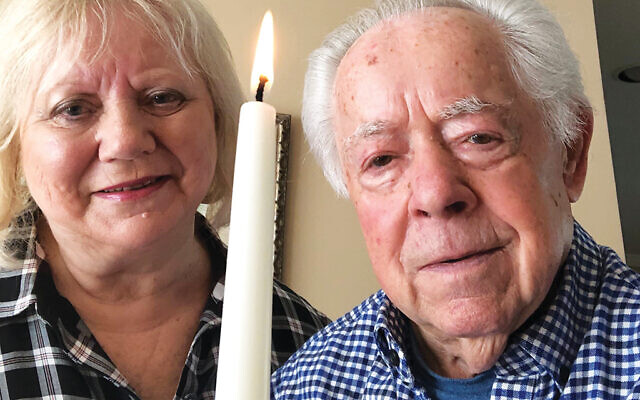 Luba and Mark Schonwetter of Livingston participate in the virtual Yom HaShoah commemoration on April 20, cosponsored by Jewish Federation of Greater MetroWest NJ and Kean University.

Holocaust survivor Mark Schonwetter of Livingston lit a candle for his community’s annual Yom HaShoah commemoration, as he often does. But this year he lit it in advance, took a photo, and submitted it to be included in a virtual candle-lighting montage for the pre-recorded video prepared by Jewish Federation of Greater MetroWest NJ and the Holocaust Resource Center at Kean University.

“It’s a little strange, but it’s better than nothing,” said Schonwetter in a telephone conversation with NJJN, shortly before watching the Greater MetroWest commemoration via Zoom, a video conferencing app. The program took place on April 20, the date of the original, in-person commemoration.

As the outbreak of Covid-19 and stay-at-home orders have upended daily life and practices, organizers of annual Holocaust Remembrance Day commemorations scrambled in the last few weeks to put together programs that would be suitably meaningful. It’s particularly important in that Holocaust survivors are in a demographic especially susceptible to the life-threatening virus.

“We didn’t want them to feel alone, especially on this day of all days,” said Sara Brown, executive director of the Center for Holocaust, Human Rights, & Genocide Education (Chhange) at Brookdale Community College in Lincroft, in a telephone conversation with NJJN. “Yom HaShoah is a day when our community comes together … and we honor and remember the victims of the Holocaust, as well as the survivors of the Holocaust.”

Chhange held a virtual ceremony on Tuesday morning, April 21, which was cosponsored by the B’nai Sholom Foundation/Congregation Torat-El in Oakhurst, Congregation B’nai Israel in Rumson, Congregation Sons of Israel in Manalapan, and the Jersey Shore Post of the Jewish War Veterans.

Many communal events, from local federations and day schools to national institutions such as the U.S. Holocaust Memorial Museum, March of the Living, and Yad Vashem, proceeded as scheduled, but were prerecorded with revised and shortened formats. And some were canceled, such as the South Orange Maplewood Interfaith Holocaust Remembrance service, scheduled for April 26. It’s been an annual event since 1977.

Many synagogues moved their programs online. For example, Temple Beth Ahm Yisrael in Springfield held a Zoom event April 20 featuring Peter Fleischmann of Clark, who survived the war in Prague. Mount Freedom Jewish Center in Randolph offered a 30-minute Zoom gathering to share and keep alive memories of those lost.

Federation’s Rishonim, community emissaries from Israel, hosted “Zikaron baSalon,” an international program that is a live sharing of Shoah memories and reflections, via Zoom.

Virtual programming had an unexpected impact, according to organizers. Family members living in far-flung places could mark the day together. For instance, the Kean/Federation broadcast had over 250 RSVPs, from the U.S., Canada, and Israel, and the Chhange event was viewed by over 530 people and reached over 2,500 others through shares and social media comments.

The virtual platform also enabled seniors who are housebound or no longer mobile due to health issues (independent of the coronavirus) the opportunity to participate in a communal program.

Organizers moved to a virtual platform as soon as the quarantine started, they told NJJN, and programs were shortened, longstanding rituals jettisoned. Naval officers would not be able to escort survivors to light candles; survivors were asked to send photos for the candle-lighting ceremony; and keynote speakers and performances by children’s choirs were canceled.

Brown saw it as a time to focus on priorities. Everything was dropped except the core of the Chhange event: testimony and candle lighting. Following a brief introduction by Brown, three local survivors, Ruth Rosenfeld, Manfred Lindenbaum, and Claire Boren each shared abbreviated versions of their experiences as children during the Shoah. Then with “Ani Maamin” (I believe) playing in the background, images of survivors lighting candles moved across the screen, with brief captions describing their experiences.

Testimonies were absent from the Greater MetroWest event. Instead, they included recorded remarks from federation’s CEO/executive vice president Dov Ben-Shimon, Kean University president Dawood Farahi, federation director of Holocaust education Ilyse Muser Shainbrown, director of the Kean University Holocaust Resource Center Adara Goldberg, and other Holocaust educators. In addition, there was the recitation of poetry and prayers, prerecorded versions of “The Star-Spangled Banner,” “Hatikvah,” and “Hymn of the Partisans,” and a photo montage of survivors lighting candles.

Both organizations felt pre-recording avoided not only disruptions by Zoom bombers and other hackers, but also connectivity issues and inevitable complications of a live broadcast involving many people in different places with varying technological capabilities.

Meanwhile, smaller live events seemed to have even more engagement than organizers had expected. At Temple Beth Ahm Yisrael, for example, about 80 people tuned in to hear Fleischmann, and although originally scheduled for just 30 minutes, so many people asked questions that the event lasted an hour, according to synagogue co-president Lesley Brooks. 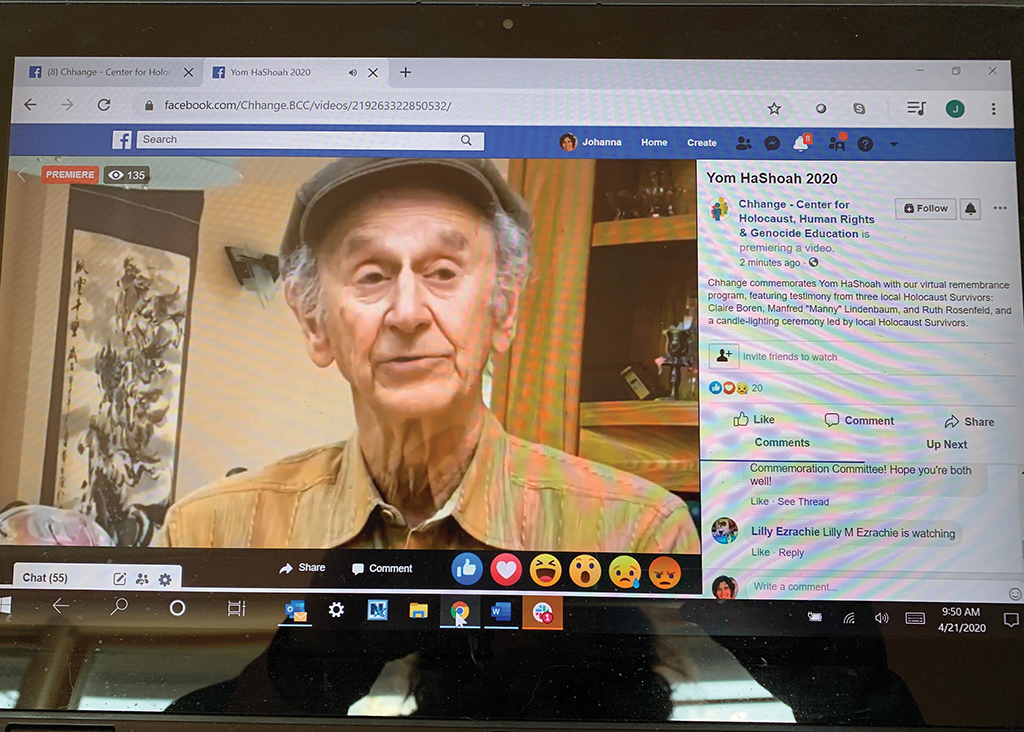 Meanwhile, survivors have other insights to share during these strange days. For one, they aren’t waiting for once-a-year events to continue telling their stories, although Zoom does have its limitations.

“It’s like you’re talking into the sky,” Schonwetter told NJJN. “You don’t know who is paying attention or who is not.” He said he prefers “to see their expressions.” Still, he will address students at Rahway High School next week via Zoom. “At least some schools and some teachers are still making sure this is not going to be pushed aside completely,” he said. He also spoke to Temple B’nai Abraham in Livingston on the evening of April 21.

Both Schonwetter and Fleischmann said they see some parallels today with their own histories. Fleischmann, from the former Czechoslovakia, survived after his family escaped from Prague in 1941. They were sequestered there and he could not go to school nor could his father work, but he said he did not deal with the kind of hardships experienced by others during the Holocaust. “We weren’t locked in,” he said.

In contrast, except for an occasional drive, he and his wife Bernice, both in their 90s, have not been out of their apartment for about a month, and Bernice spent six days at Overlook Hospital successfully fighting the coronavirus. “In a way, it’s worse than what I experienced in Prague,” said Fleischmann. “This virus is a really dangerous enemy. You don’t know where it will come from or how it will hit you.”

Luckily for him, his courage speaking out has sown unexpected benefits. Two of the families of b’nei mitzvah children he has twinned with over the years have volunteered to do the Fleischmann’s grocery shopping, and their synagogue community has also reached out to provide any assistance needed. “That’s a really good example of being an upstander,” he said.

Schonwetter compared staying at home today with his childhood experience of hiding in rural Poland with his mother and sister. “In those days you had to be careful with whom you get in touch, or who you see,” he said. “Now, it’s the same thing … You’re afraid to go outside or you’re not supposed to, because you don’t know who you can get close [to], right? Because you may come across somebody who unfortunately has the virus, and if you get infected then you’re in trouble.”

But that’s where the similarities end. Now he’s comfortable financially, has access to food, and doesn’t have to hide. “Today, I’m free, and I can go outside for a walk, so it’s not the same thing.”

Asked how they are coping with the quarantine, Schonwetter offered resilience in the form of humor (“I am trying to behave myself,” he said), while Fleischmann acknowledged being a little bored but said, “I’m doing a lot of Zooming, like everyone else!”

In addition to talking with his seven grandchildren around the country, he’s also continuing to volunteer as a business mentor to local entrepreneurs through the national organization known as SCORE, a partner of the U.S. Small Business Association.

Lindenbaum and Rosenfeld, two of the three survivors who shared their stories for the Chhange ceremony, also offered some hope and optimism for this moment in time.

Despite the chaos he lived through, when his parents pushed him into the arms of strangers with the hope he would survive, Lindenbaum said, “There were so many people who reached out and made a real difference in my life.” He looks for those people today and sees them in the medical personnel, putting their own lives at risk. “They are our heroes,” he said.

And Rosenfeld, who lost both parents at 3 and survived the war with her sister, said that while “hatred corrodes the vessel that contains it, by contrast, even a small act of kindness can change an entire life. What better time than now to perform acts of kindness?”