Jake Green held his bar mitzvah service at home with 150 guests in attendance on Zoom. Photos of family members decorated the walls of the Greens’ home in Newtown, Pa. Photo Courtesy Green family

As the Covid-19 pandemic takes further hold, Rabbi Charles Briskin at Shir Ami, a Reform congregation in Newtown, Pa., considered the situation as an opportunity to do something unique for a family who did not want to postpone their son’s March 28 bar mitzvah celebration.

Briskin and Shir Ami Cantor Rachel Kohlbrenner had siddurim and a Torah scroll dropped off at the Newtown home of Mike and Nancy Green, whose son Jake was celebrating his bar mitzvah. Then on Shabbat morning, in the context of as-normal-a-service-as-possible, Jake did everything he had prepared for with his family, along with about 150 guests from across the country using Zoom. Afterward the family danced around their house, which was decorated with printed photos of family members taped on the walls, Briskin said, “so they could feel like they were there.”

“We were able to create community and intimacy even though not everyone was in same room,” Briskin said. “Seeing faces helps decrease that sense of distance and isolation.”

Mike Green wrote in an email to NJJN that their friends surprised his family with a “car parade” on the street following the ceremony. “There were about 18 to 20 families in their cars honking horns, holding signs, and one blasting Hava Nagila.”

In a world overwhelmed by anxiety, sickness, death, isolation, and rescheduling of lifecycle events, Mercer-Bucks congregations have hurried to put services, programs, education, Pesach preparations, and pastoral care online. And as the crisis shows no sign of slowing down for the foreseeable future, rabbis are thinking outside the box, willing to make adjustments to traditional practices. 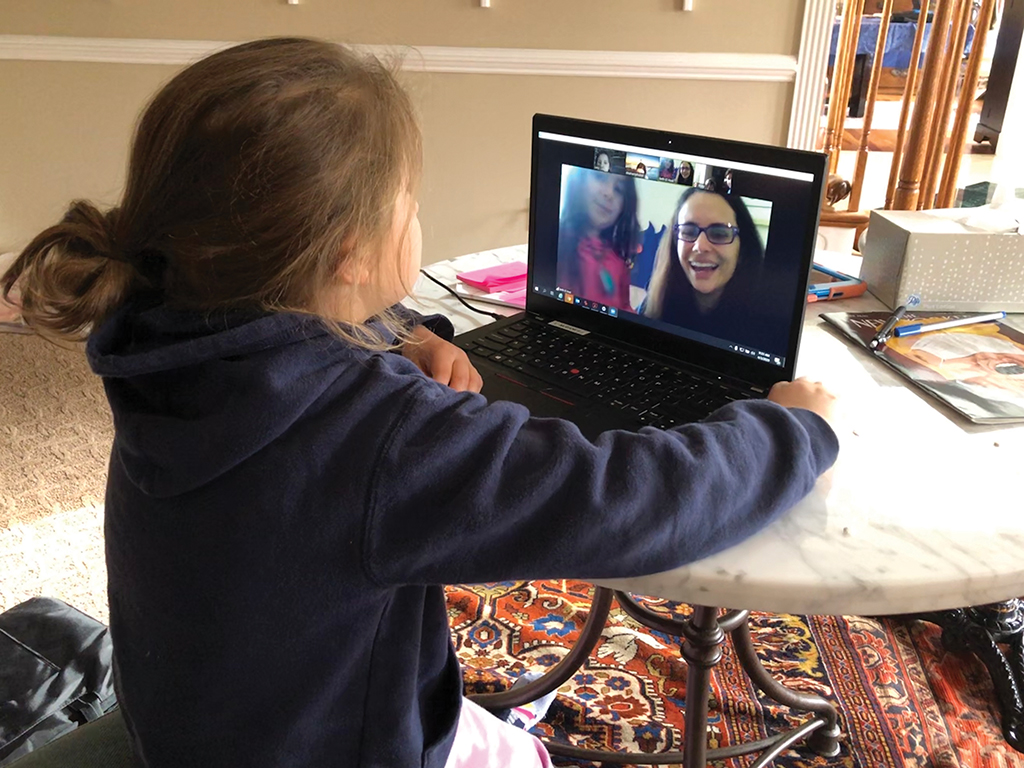 “We are trying to make virtual as many offerings as possible, both to establish a sense of normalcy but also to provide people with connection because so many are feeling isolated,” said Rabbi Adena Blum of Congregation Beth Chaim in West Windsor.

Synagogues are also weighing how flexible the halacha, or Jewish law, can be in order to serve the needs of the community during the coronavirus pandemic.

In another case of a rescheduled b’nai mitzvah, Rabbi Aaron Gaber of Congregation Brothers of Israel, a Conservative synagogue in Newtown, Pa., plans to recognize a child on Zoom close to the original date of the celebration. When it is eventually rescheduled the child will chant the haftarah he or she had learned for the original date.

“We can certainly take rabbinic rules and bend somewhat to do things that must happen, without causing undue stress,” Gaber said.

Beth El Synagogue in East Windsor, also Conservative, is bracketing Shabbat with services: a Friday evening mincha service at 6 p.m. followed by Kabbalat Shabbat through Lecha Dodi on Facebook Live, and a Havdalah service on Zoom. To provide congregants with an opportunity to do Yizkor on Passover, Beth El will use Zoom for a pre-holiday mincha service with Yizkor on Tuesday, April 14, at 6 p.m., before the seventh day of Passover begins.

Rabbi Jay Kornsgold of the Conservative Beth El Synagogue has seen strong participation in these online services. “One of things I’m finding is that people are just looking for an opportunity to come together,” he said.

In a March 27 pre-Shabbat message, Robert Freedman, interim rabbi at The Jewish Center (TJC) in Princeton, drew on the decades-old ruling by the Conservative Movement’s Committee on Law and Standards (CJLS) “that public worship, convening the community, was a primary need greater than the halacha that prohibited driving on Shabbat.” In that light, Freedman proposed, “for these times, in this community, our gathered faces in a video conference could constitute a minyan for the recitation of Mourner’s Kaddish.” 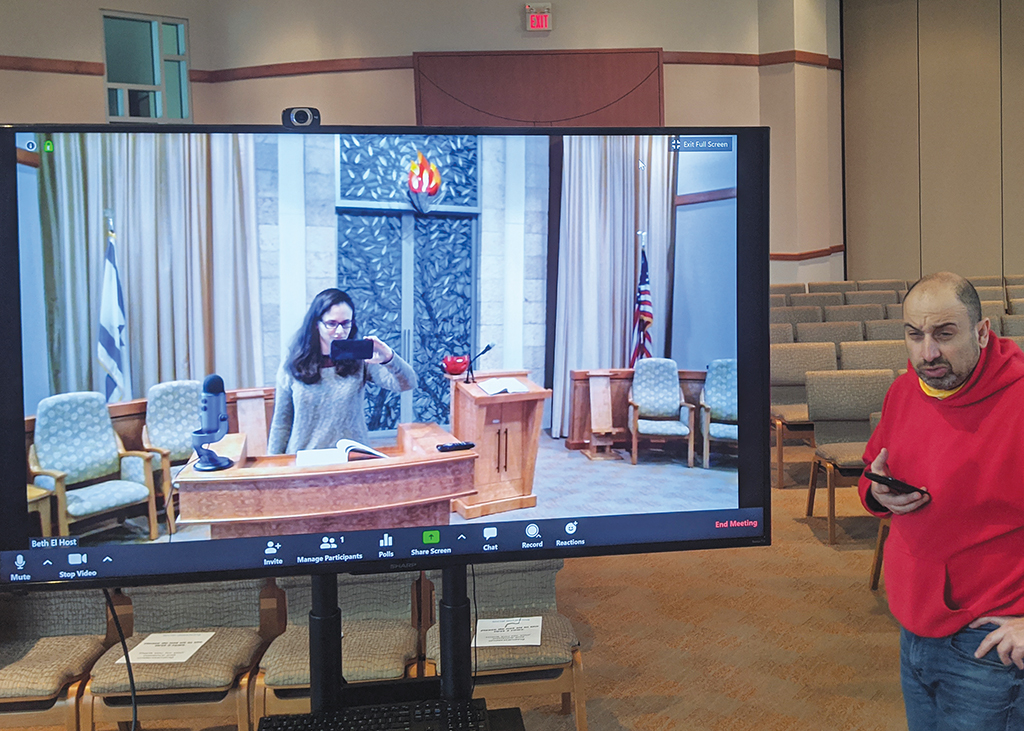 Raysh Weiss, with the help of congregant Steve Young, sets up livestreaming that will remain on for Shabbat services. Photo Courtesy Raysh Weiss

“We are trying to keep congregants’ spirits up and create the best worship opportunities and online programming under the circumstances,” said TJC Cantor Jeff Warschauer. “We are adjusting services so people can get spiritual nourishment as much as possible.”

Rabbi Raysh Weiss of Congregation Beth El in Yardley, Pa., told NJJN that Zoom is on throughout Shabbat at her synagogue, where she leads the services by herself. She compared using Zoom to the practice of a 17th-century Italian rabbi during a series of plagues to hit Europe. “He did window sermons for people quarantined in their house, and Zoom gives us a virtual window sermon,” she said. “My first priority is safety and health and connecting everyone with each other; I feel very blessed to be in a time when we have all these resources at our disposal.”

Zoom is also effective for preschoolers and their families, and the regular monthly Shabbat Katan service at TJC now meets weekly from the synagogue sanctuary. “The kids are a little point of joy, and for us it’s lifesaving,” said Warschauer, who leads the service with his wife Deborah Strauss, a klezmer musician, with director of congregational learning Sharon Diamondstein from her home.

Rabbis are also finding ways to use Zoom to encourage interaction. During Friday evening mincha and Kabbalat Shabbat services at Lawrenceville’s Adath Israel Congregation, Rabbi Benjamin Adler asked people how they were dealing with anxiety and, as he does in his normal service, invited them to say Shabbat shalom to people to their right and left (and, as it was on Zoom, above and below them, too) and to share news of happy events in their lives.

Blum encourages people to communicate, via the Zoom chat box, to say Shabbat shalom, offer a blessing of gratitude, add names for Misheberachs (prayer for recovering from illness), and to say the Mourner’s Kaddish.

At a Havdalah service on March 21 performed by the independent singing minyan Zamru, Rabbi Julie Roth, the executive director of the Center for Jewish Life at Princeton Hillel and Princeton University’s Jewish chaplain, invited people to express their hopes for the following week. 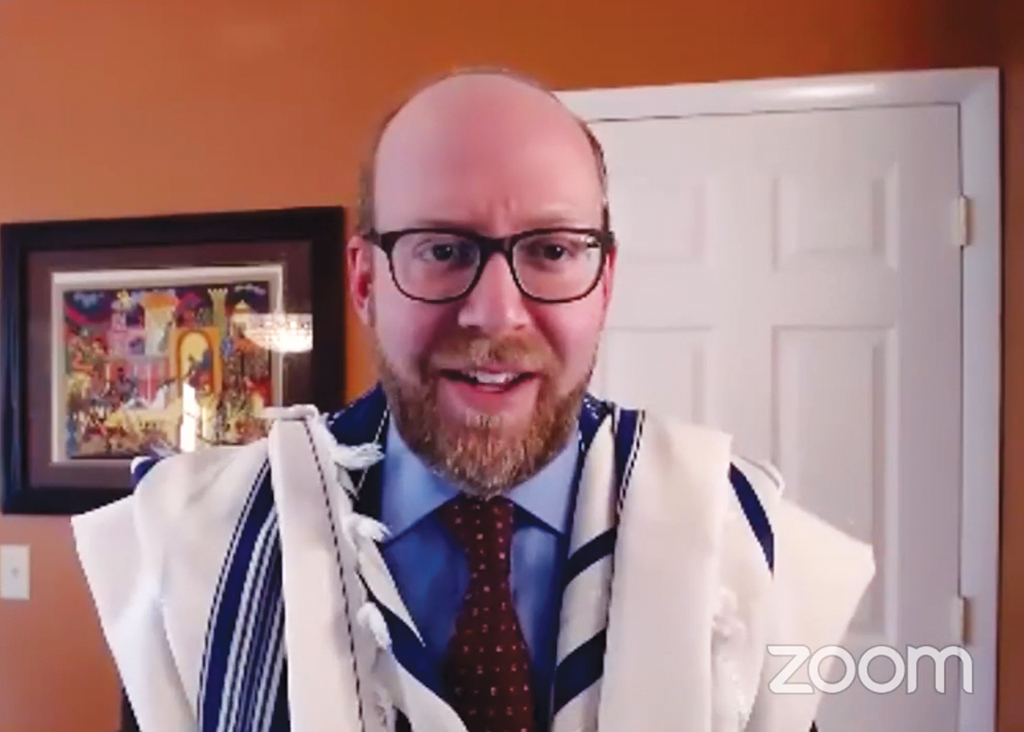 Even regular emails can encourage connection. Adath Israel Congregation has added a “Quarantine Corner” to its weekly e-Blast, a space for people to “share something you’re doing to keep busy.” On March 26, Adler and his family shared a link to a favorite recipe, Mark Bittman’s No-Knead Bread, especially useful in a time of limited yeast availability.

Another staff member, Lisa Miller, shared photos of a walk with her children and wrote: “We like to look for the beauty in things during these scary times” and “The great thing about being in quarantine is learning how to just be with each other.”

To deal with the fear and anxiety brought on by the pandemic, opportunities for mindfulness and meditation have expanded. At Shir Ami, a thrice-weekly, 15-minute “morning blessings and meditation” session, Briskin said, helps people “get centered and in a good place for the rest of the day.”

Congregations have added both serious and fun activities online, too. At Beth Chaim, a Zoom class for high school religious school students, “God Talk in the Time of a Pandemic,” was so well received that they added sessions for adults.

Rabbi Diana Miller of Kehilat HaNahar in New Hope, Pa., met with her confirmands and their parents to study Jewish texts about responsibilities in times of crisis or when somebody is in danger to themselves or to others. And with the assistance of her 4-year-old daughter, Raysh Weiss conducted a virtual challah bake in her kitchen.

Connection also occurs in one-on-one formats, and many congregations are having board members or volunteers reach out to all members. “It is a great way to not only let them know people are here and to keep in touch, but also to identify any needs we can follow up on,” Adler said. One of these calls identified an Adath Israel member who didn’t drive and needed some items, and Adler was able to find a congregant across the street from her who was willing to help out.

Pastoral counseling continues online, but also by phone, and Blum said now that people are connecting virtually she is receiving fewer calls from congregants who feel isolated.

“I feel like we as a Jewish community, and as a general society, are going to emerge much changed in the way we communicate,” Weiss said. “So many new means of connection are being discovered. There’s a lot of potential.”