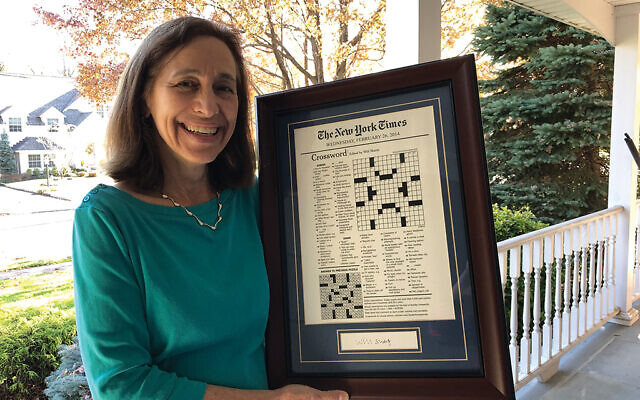 All of these clues appeared in The New York Times crossword puzzle and were written by Ruth B. Margolin, a retired Jewish educator who constructs puzzles that have been published in the Times, Wall Street Journal, and USA Today.

To construct puzzles, “you have to love words and love the hunt,” said Margolin, who lives in Westfield.

She started filling in puzzles regularly in 2004. A few years later she said to herself, “I could do that,” and began creating her own and submitting them to the Times. She was “over the moon,” she said, when her first one was accepted in 2012, and since then she’s had nine more puzzles appear in the newspaper.

Margolin starts each puzzle by coming up with a theme, and even a stray remark can inspire her. A stumble by a speaker at a fund-raiser she attended who spoke of “wheels on meals” (instead of Meals on Wheels) gave her the idea to use WHEELS ON MEALS as the answer for the clue, “Why did the chicken fail to cross the road?” Another time, after spotting a billboard that advertised nearby homes by urging drivers to “lose the wait,” she created a puzzle with commuter puns, such as the clue “Split an Uber?” (Answer: PAY YOUR FARE SHARE)

A puzzle that she recently published in The Times’ Sunday Magazine was sparked by her noting that if the “S” at the ends of “his and hers” weren’t pronounced like a “Z” the phrase would sound like “hiss and hearse.”

“I started thinking about the end of the Cleopatra story, when she is bitten by a snake and dies,” said Margolin, and then wondered, “What other words and phrases with a ‘Z’ sound would change in a fun way if you make an ‘S’ sound out of them?” She came up with several clues, including “Parent’s fervent prayer to the school nurse?” (Answer: TELL ME NO LICE)

After deciding on a theme and finding words and phrases that adhere to it, Margolin inserts them into the nascent puzzle, then sprinkles in black squares in a symmetrical pattern. Every puzzle needs “some lengthy, meaty words, and both consistency and variety,” she said. She uses a software program called CrossFire, which supplies a list of every word that will fit in a certain slot, at times up to 100 words. Margolin studies the list and then makes her selections, picking words “that are juicy and fun.” And since many people do puzzles first thing in the morning, she said each word has to pass “the breakfast test”: Violence, gore, and controversial subjects are out.

The last step for Margolin is writing the clues, which includes consulting a website that lists every clue that has ever appeared in the Times to make sure what she produces is fresh. When crafting clues, one challenge, Margolin said, is “to misdirect in a fun way so when you get it, you say, ‘Oh!’”

While it takes Margolin just 10 to 30 minutes to complete the Times puzzle every morning, constructing a puzzle can take anywhere from a few weeks to a few months, she said. An extensive editing process with newspaper editors often follows.

Before embracing the crossword life, Margolin spent 20 years as an administrator in Jewish education, working at the University of Michigan’s Hillel, the Monmouth Regional Hebrew High School, and NFTY, the Reform Jewish Youth Movement. Until 2015 she was the assistant director of Pre-Collegiate Learning Center, a Jewish high school in East Brunswick.

She is involved in many volunteer activities in the Jewish community and is in her second term as vice president of Women’s Philanthropy of Jewish Federation of Greater MetroWest NJ — her first two years serving as VP of Major Gifts, and now of Education, helping to organize the Women of Wisdom Education Series. She is also a vice president of Jewish Family Service in Elizabeth and of Congregation Beth Israel in Scotch Plains, where she and her husband, Michael, are members.

Margolin has given more than a dozen talks about creating crossword puzzles at libraries in New Jersey and New York, and for several years she has served as an official at the American Crossword Puzzle Tournament, in which about 800 participants compete. She also participates in Women of Letters, which offers a packet of free puzzles created by women to anyone who makes a donation to one of several nonprofits that support women; women, Margolin noted, are underrepresented in the crossword world. “It’s not clear why there aren’t more women submitting, but there are efforts to encourage more women and people of color to create puzzles,” she said.

Margolin enjoys mining her Jewish knowledge for crosswords. A clue she wrote for a 2016 puzzle that appeared in the Times read “____ Tamid (synagogue lamp).” Margolin’s friends, who were not regular puzzle solvers but tried this one all the same, were thrilled.

Answers to clues in the first paragraph: A seven-letter word for a Dead Sea Scrolls sect is ESSENES; a five-letter word for an Israeli resort city is EILAT; and a four-letter word for the prophet who said, “The Lord roars from Zion and thunders from Jerusalem” is AMOS.