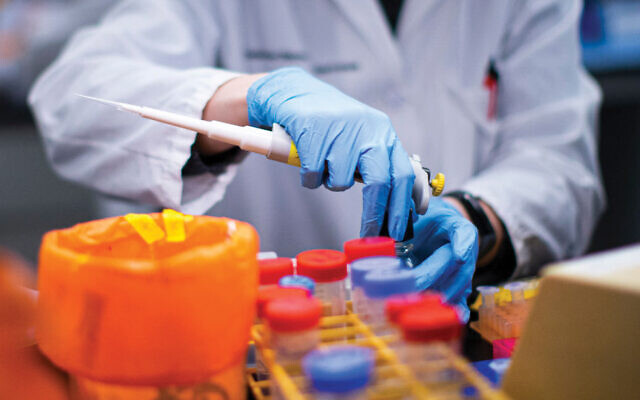 A researcher in a lab developing testing for the coronavirus at Hackensack Meridian Health Center for Discovery and Innovation in Nutley. Photo by Kena Betancur/Getty Images

Welcome to the age of coronavirus where kissing mezzuzot and prayer books is out and air kissing the Torah is in, shaking hands is eschewed in favor of elbow bumping, and attending services is replaced by live streaming.

Synagogues around New Jersey are reevaluating everyday activities and building protocols to minimize the spread of germs. One congregation closed for a day to conduct a deep cleaning, and another is asking congregants to leave borrowed tallitot on pews for cleaning and inviting them to keep borrowed kippot. Another synagogue suspended a long-held practice of holding hands at the end of services.

When handling food many synagogues have moved to prevent unnecessary contact — challah is pre-sliced and handed out by individuals wearing gloves, food is served by staff or volunteers at kiddushes, communal bowls of snacks are out, and disposable gloves are provided for taking serving utensils.

Most have placed plenty of hand sanitizer and disinfecting wipes in heavily trafficked areas and a number of them have cancelled programs involving large crowds and close quarters. A few synagogues cancelled their Purim carnivals altogether while others dropped individual activities such as face painting or bounce houses. And, of course, congregants are being asked to wash hands frequently, cough into their arms or, preferably, a tissue, and stay home if they show any signs of illness.

While some synagogues have formed special committees with physicians and other specialists to determine how to react to the crisis, others are leaving such decisions to their executive committees, presidents, executive directors, and rabbis in consultation with doctors, Centers for Disease Control and Prevention (CDC) guidelines, and local health departments.

Jewish Federation of Greater MetroWest New Jersey, which often takes a leadership role among local Jewish institutions, is deferring to guidance from the CDC and the State of New Jersey. Scheduled events are being handled on a case-by-case basis, such as the decision to cancel the Jewish Community Foundation’s Grotta Fund for Senior Care’s Advancing Age-Friendly Communities in New Jersey Conference that was scheduled for March 11. Visits by Israeli delegations, including the Diller Teen Fellows, the HaZamir Israel choir, and a group from Raanana, were postponed. CommUNITY Mitzvah Day on March 29 remains on the calendar, for now.

In a March 5 email sent to its members, JCC MetroWest said it is “requiring” staff, members, and visitors who have traveled to a country listed by the CDC with a Level 2 or 3 advisory to “self-quarantine for 14 days even if you are asymptomatic.” So far, those countries include China, Iran, South Korea, Italy, and Japan. The requirement to self-quarantine applies to the traveler’s family members as well, according to the email, and anyone who has been in physical contact with travelers to those countries are asked not to enter the building. “Our one and only goal is to keep our JCC MetroWest community as safe and healthy as possible,” wrote CEO Stuart E. Raynor.

JCC of Central New Jersey in Scotch Plains echoed the commitment to its members’ safety and is also following CDC recommendations.  “The senior leadership team at the JCC is keeping up-to-date on the situation, listening to recommendations coming from appropriate authorities and taking proactive steps to minimize disease transmission,” according to an email sent to members.

The chair of March of the Living, which brings thousands of young people to Poland each year to give them an up-close view of the Holocaust, announced, “with a heavy heart,” that this year’s march has been canceled.

Also, the Jewish Week Media Group, NJJN’s parent company, postponed its Grand Wine Tasting event, which had been scheduled for March 16 in New York City, and hopes to reschedule it a few weeks prior to the High Holidays. “We deeply regret this, but this health concern is most significant and the need to be responsible and not put anyone at risk is paramount,” wrote publisher Rich Waloff in a statement.

On Monday, New Jersey joined eight other states in declaring a state of emergency to help contain the spread of coronavirus.

“The State of New Jersey is committed to deploying every available resource, across all levels of government, to help respond to the spread of COVID-19 and keep our residents informed,” said Gov. Phil Murphy.

The announcement came a day before health officials announced the state’s first death attributed to the virus. At press time there were 15 presumptive positive cases of coronavirus in New Jersey and more than 30 pending tests, according to the state’s Department of Health. One is a 30-year-old from Teaneck and another is an 18-year-old from Passaic County who was in close contact with a person from New York who tested positive.

The declared State of Emergency is a required step to open assistance from the federal government and allows the New Jersey Office of Emergency Management to act on behalf of the governor to utilize resources and tap into other sources of funding to aid localities. In addition, the declaration safeguards consumers by prohibiting excessive price increases and expedites the delivery of goods and services necessary for preparedness and response efforts.

“Our executive order declaration will allow us to stay ahead of this, and we will get through this together,” said Lt. Gov. Sheila Oliver at a March 10 press conference.

GOA had faculty and students in self-quarantine this week. Nineteen students and two faculty members at GOA were told to stay home from school March 5 and 6 after participating in the Jewish Canadian Youth Model UN because a group from SAR high school in Riverdale — members of at least one family in the school have tested positive for the virus — was in attendance. The GOA students returned to school on Monday, March 9, after confirmation that the SAR students who attended the Model UN had no symptoms following their potential exposure.

The JKHA/RKYHS administration is addressing student concerns in developmentally appropriate ways, and the chair of the science department, a virologist, will address students and parents.

JEC has added a cutlery dispenser that releases one fork, knife, or spoon at a time so people won’t reach into a pile and touch multiple items, and the administration is reviewing all class trips and outings. A planned Shakespeare competition with SAR was postponed.

Gottesman Academy has cancelled all events involving large gatherings at the school, including school programs and facility rentals.

Hand sanitizer has been placed throughout all the schools, which are conducting deep cleaning of the buildings, and administrators are emphasizing the importance of washing hands frequently and staying home if one feels ill. They have instituted medical advisory committees and are taking direction from public health experts and the CDC.

Allan Janoff, the third-generation owner of Crystal Plaza in Livingston, knows these are not normal times for his busy venue

“I understand the concern,” said Janoff, who told NJJN of two recent events postponed until May or June.

Some health protocols he’s instituted at Crystal Plaza include having his bartenders wear gloves and change them every 30 minutes, adding a gloved attendant to restrooms so patrons do not have to touch a door, offering disposable silverware, and providing antiseptic wipes for a vehicle’s steering wheel when it is retrieved from valet parking.

“We want to assure [that] any patron that attends any event at our venue is comfortable and protected as possible,” he said.

Rolf Shick, catering sales manager at The Manor in West Orange, told NJJN he had “one event cancelled” and said “areas of the facility are cleaned several times.”

Senior residences, including Jewish Community Housing Corporation and the Daughters of Israel nursing facility, both in West Orange, have populations most at-risk of contracting coronavirus, according to media reports. Both local facilities are taking steps to manage their risks and as Daughters of Israel medical director Dr. Joshua Schor said, “Hope for the best, but prepare for the worst.”

“The Jewish Community Housing Corporation of Metropolitan New Jersey (JCHC) has been taking precautionary steps to try to prevent an outbreak of COVID-19 at our buildings and to do the best we can to protect the health and well-being of our senior residents,” said CEO Harold Colton-Max. The four facilities: Lester Senior Housing Community, Jewish Federation Plaza, South Orange B’nai B’rith Federation House, and Village Apartments of the Jewish Federation, are following best practices from organizations including the CDC, the United States Department of Housing and Urban Development, LeadingAge, and the Health Care Association of New Jersey. JCHC already had general pandemic policies in place and extra emergency supplies. It is now emphasizing basic preventive measures like handwashing and self-quarantine for anyone with flu-like symptoms. Staff have been asked to stay home if they show flu-like symptoms, and they will be paid “regardless of whether they have any paid time off remaining or not,” according to Colton-Max.

Schor said “We spend the majority of our days now developing contingencies, accessing extra equipment in case the Covid-19 really does make its presence felt, educating staff, and keeping staff morale as high as we can.” The only available entrance into the building is in the front, and security is screening anyone who enters, including visitors, vendors, and students. All large gatherings have been cancelled, but notwithstanding these measures, Schor said “The show must go on, and we have a sacred community duty to care for those least able to care for themselves.”