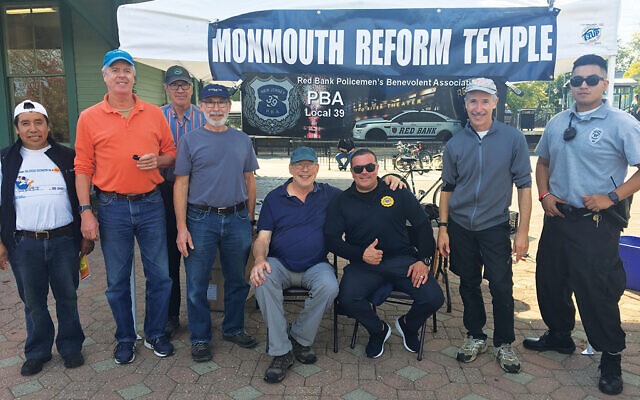 For years, Dean Ross has been spreading the light, carrying out tikkun olam projects to benefit his synagogue and the residents of Red Bank and nearby towns.

“If there’s any good being done in the community, Dean’s name is attached to it,” said Rabbi Marc Kline of Monmouth Reform Temple (MRT) in Tinton Falls, where Ross is a longtime member and leader.

“He is a lion in the world of doing good work, and he does it not for recognition, but because it’s the right thing to do.”

Ross, a former MRT board member and vice president, has championed such efforts as collecting shoes for needy children and coats to donate to veterans; he also revived MRT’s Mitzvah Day — when congregants perform service projects throughout the community — five years ago after a period of dormancy, and serves as its cochair.

Of course, he doesn’t do his good work alone and readily acknowledges it. “I am so lucky that we’re a big social-action synagogue and I can get volunteers to help me do my things,” said Ross, who lives in Lincroft.

For the past five years, the light Ross has and continues to spread is more than metaphorical; his Shine-A-Light initiative does just that literally, by installing lights on bikes that area day workers, most of them Hispanic, rely on as their principal mode of transportation.

Ross said he first got the idea after he “almost hit somebody late at night on a four-lane road.” He remembers thinking, “The day workers are wearing dark clothes, often riding late at night, and have no reflection on their bikes — so I thought I could install lights for free,” he said.

New Jersey state law requires bikes ridden at night to have lamps — white light in the front, red in the rear — but, Ross said, he discovered alarming statistics about bike-rider fatalities on state roads. In the last three years, for example, there have been 60-80 such instances resulting in loss of life, and most of these tragedies can be attributed to the lack of lights.

So, Ross said, providing the lights is “a matter of saving lives.”

He decided to launch the project at St. Anthony Church in Red Bank, whose congregation includes many Hispanic members. After Ross explained his plan, a church deacon announced the offer in Spanish during worship services.

Ross recruited volunteers from MRT, including some Spanish-speakers, and set up shop to install the bike lights for free at the church on Mondays.

But at the start of 2019, the number of those taking advantage of the offer was way down. It was thought that the government’s increased targeting of undocumented immigrants had alarmed many of the potential recipients, who feared being apprehended and possibly deported.

To remedy the situation, Ross contacted the Red Bank police, who gave assurances regarding the Hispanic laborers. While not a sanctuary city, the borough council passed a resolution two years ago declaring Red Bank an “inclusive city” that supports all immigrants and leaves it up to local authorities on how to handle undocumented immigrants.

Police Chief Darren McConnell told the Asbury Park Press that officers would report an immigrant without legal status to Immigration and Customs Enforcement only if that person has been charged with an indictable offense, as recommended by the state attorney general.

In a demonstration of their support, the Red Bank police started to actively promote the program — which was also moved to the town’s train station, closer to the section of the borough where many Hispanic people live — and members of the local Policemen’s Benevolent Association joined the effort as volunteers; the number of people coming forward to take advantage of the offer grew. In fact, of the 400 lamps Shine-A-Light has given out since its start, 65 were installed last year.

“People really appreciate what we do, and moving forward I’d like to see this program expand to Freehold and Long Branch” to serve their immigrant populations, said Ross.

For the first four years of the program, Ross bought the lights in New York City, paying for them out of his own pocket. This past fall he received some donations, mostly from temple members, to assist with the project.

Before and beyond the lights, Ross other tikkun olam efforts are far-reaching. In 2014, when he relocated his shoe store, Doc Shoppe, from Fair Haven to Red Bank, he stopped selling children’s shoes. Rather than sell off his remaining stock of children’s footwear to a wholesaler, Ross gave away over 600 pairs to students in need at local elementary schools.

The give-away was done over two Sundays; people lined up down the block to receive the shoes.

“I got a lot of high fives and smiles,” he said. “That was my thank you. I will never forget that. Of course, we didn’t have every size, so for about a dozen people I took their names and numbers and went to Marshall’s and bought them shoes.”

Ross is now semi-retired; he is still a partner at Bagel Oven in Red Bank, he said, “but I’m done baking. After 25 years I’ve had enough.”

He remains active in numerous other volunteer pursuits.

Ross is a member of the employability committee of Family Resource Associates in Red Bank, which assists children and young adults with disabilities. He is on the board of the Jewish Heritage Museum of Monmouth County in Freehold, serves on the scholarship committee of the Red Bank Elks, and is past president of the Learning Disabilities Association of New Jersey for Monmouth and Ocean counties.

Ross and his wife, Sharyn, have three children and four granddaughters.

“I tell Hebrew school students and everybody it’s not a one and done,” Ross said of the good deeds he performs. “I tell people this is what Jews do. This is being Jewish.”

To nominate a community member for a profile in NJJN, please send the person’s name, contact information, and a brief description of why you believe the individual should be profiled to editorial@njjewishnews.com. Put “Members of Our Tribe” in the subject line.