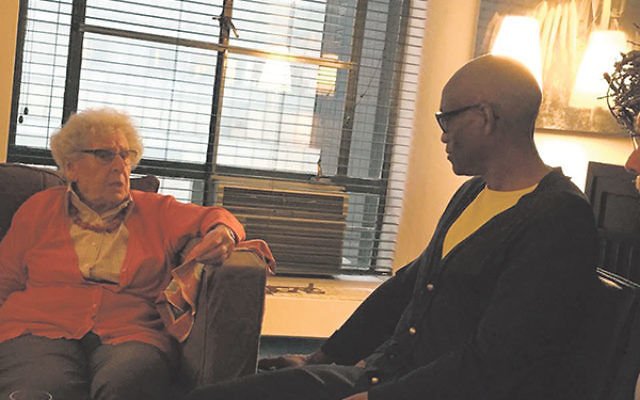 When Montclair State University hosts the world premiere of Bill T. Jones’s new dance work on Thursday, June 18, audience members will include a Holocaust survivor who served as a nurse and social worker during the war.

Dora Amelan is also the inspiration for the show. The 95-year-old is flying in from Paris for the performance of Analogy/Dora: Tramontane, the first part of a planned trilogy by the Bill T. Jones/Arnie Zane Dance Company. It will run through June 21 as part of MSU’s Peak Performances series.

Dora is the mother of Bjorn Amelan, Jones’s life partner and creative collaborator. Jones, an award-winning New York-based choreographer, dancer, and director, and Amelan, a sculptor and designer, have been together since 1992. They have collaborated before on works by the company Jones founded with his previous partner, the late Arnie Zane.

The idea for the show was a long time brewing. “I began interviewing Dora 10, 12 years ago,” Jones said. He got her to tell him about her youth, growing up in comfort and affluence in Belgium, where her parents ran a holiday resort, and how that happy life was destroyed in 1939, when she was 18, by the Nazi invasion.

She managed to escape to France, leaving behind her father and her seriously ill mother. (“Tramontane” is a word for the north winds that, like refugees and exiles, sweep across the mountains and other great barriers.)

Though Dora herself contracted typhus at one point, she managed to help others survive, working for the OSE (Oeuvre de secour aux enfants), an underground Jewish children’s aid society, in the horrendous internment camps at Gurs and Rivesaltes.

Her son told NJ Jewish News that recording her story was Bill’s idea. “He did it as a gift for my brother and myself,” Bjorn Amelan said. “We knew the outline and some of the players; we’d heard some of her anecdotes, but we didn’t know many of the details. Bill was a very good and tender listener.”

Dora, who lives in Paris, related her history without tears or rancor, Jones recalled. She was witty and unsentimental and never overly dramatic. The woman he refers to as his mother-in-law, he said, “is a wonderful raconteur, and she was able to speak with great moral authority about human experience.”

Their exchanges eventually became the text of this new work. Movement is interwoven with speech and song, accompanied by onstage musicians who perform works by Franz Schubert, French songs from the World War II era, and original compositions by Nick Hallett.

The other two works in the trilogy will explore other “wars” and identity struggles.

For Jones, an African-American, their discussion highlighted parallels and contrasts between the Jewish and black experiences. He found those parallels fascinating, and sometimes painful. While acutely aware of the divergence in their cultural and social experiences, he sees the commonality between blacks and Jews. “We’re both outsiders,” he said.

He also makes it clear that he has great respect for Judaism. “It has made an immense difference to the world,” he said.

“I have always been very involved with identity politics in my art form,” Jones said. His work, which has boldly explored racism in America, the AIDS epidemic, and the nature of dance, has earned Jones two Tonys, and other honors, including a MacArthur fellowship, the Dorothy and Lillian Gish Prize, and a Kennedy Center Honor.

Focusing on a Holocaust story offered him another way to stir awareness — and to deal with the identity issues facing the people he has been intimately involved with. Like Amelan, Zane, who died in 1988, was Jewish. “You like them kosher?” Jones recalled Zane’s mother’s saying when she heard about Amelan.

Jones knows from strong mothers, but his own, who died in 2002 at 89, “was very, very different” from Amelan’s. She grew up in the South with little education, and had 12 children (Bill is the ninth). “Dora pushed to meet my mother but she was less than eager,” Jones said. “She was shy, and she was not looking to bond with this white lady.”

But eventually a lunch date was arranged. The guys were excluded; it was an all-female get-together, with the mothers and Bill’s sisters, who told him what happened. As they were digging into their respective pizzas, he said they related, “my mother turned to Dora and said, ‘Sister, do you want to have a piece of mine?’ — and they knew everything was cool.”