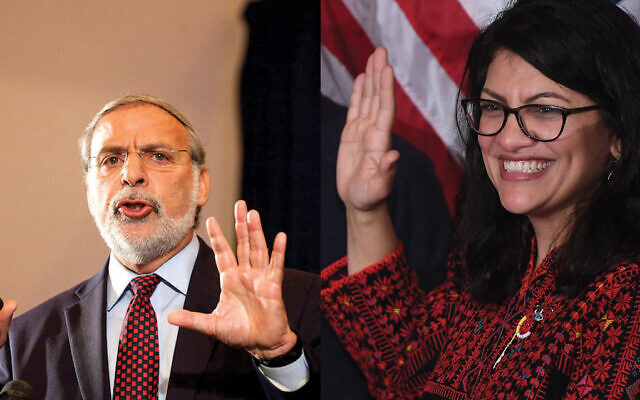 Former NY state Assemblyman Dov Hikind was ejected from an event at Rutgers University for calling on Rep. Rashida Tlaib to apologize for inflammatory rhetoric.

Dov Hikind is officially out of politics, but he said he hasn’t retired from seeking justice. The former Democratic New York state assemblyman attended a Muslims for Peace event at Rutgers University on Feb. 9 and interrupted Michigan Democratic Rep. Rashida Tlaib’s speech, shouting “What about your anti-Semitism?” He was immediately escorted out by police.

In a phone interview with NJJN, Hikind said he was angered that last month the congresswoman retweeted a retweet of Palestinian leader Hanan Ashrawi, which claimed Israeli settlers murdered a Palestinian child. According to reports, Qais Abu Ramila, an 8-year-old boy, accidentally drowned in a rain-flooded pit. Ashrawi eventually apologized on Twitter for passing on unconfirmed information. Tlaib, who has since deleted the retweet, did not apologize.

“I confronted her on her blood libel against the Jewish people,” Hikind told NJJN, referring to the unfounded, centuries-old allegation that Jews kidnap and murder Christian children to use their blood for rituals, such as making matzah for Passover. “She has to apologize. Her behavior is dangerous. She has millions of followers and she is tweeting that Israelis murdered a Palestinian child. We know what blood libels have done in the past. I think this is the most egregious thing she’d done.”

Tlaib, the daughter of Palestinian immigrants to the United States, is a vocal supporter of the Boycott, Divestment, and Sanctions movement.

Hikind, an Orthodox Jew, said he didn’t blame the police officers for removing him.

“They were just doing their job,” he said.

Hikind said he listened to other speakers at the event for about three hours and didn’t object to anything that was said. He acknowledged that it was good that Ashrawi apologized and said he hoped Tlaib would eventually do the same.

Although Hikind said he’d love to enjoy retirement, due to an increasing amount of anti-Semitism and harsh rhetoric against Israel, he hasn’t been able to. The founder of Americans Against Anti-Semitism, he said he doesn’t have the luxury of staying quiet and that fellow Democrats in Congress should call out Tlaib.

“I’d love to relax but it’s a little difficult when you see Jews assaulted and people asking you if you’re living in the pre-Nazi Germany period,” he said. “Just the fact that people are asking that is unbelievable. Where’s [Adam] Schiff (D-Calif.)? Where’s [Jerry] Nadler (D-N.Y.)? Where are all these people who supposedly care so much about what’s right? Why aren’t people speaking out?”