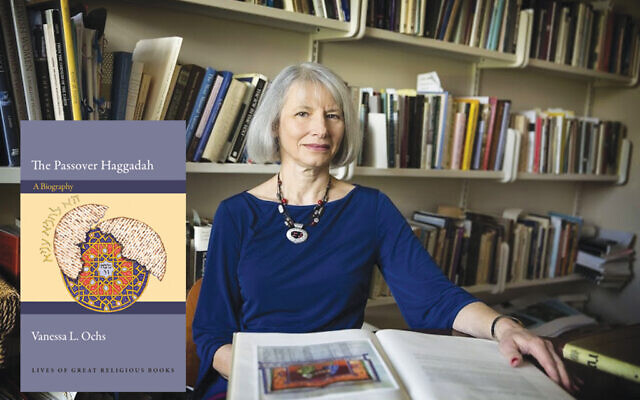 Vanessa Ochs said she wanted to focus on “a particular book that is incredibly beloved to individuals and to families.”

Asked why she was the right person to write “The Passover Haggadah: A Biography” for the Princeton University Press series “Lives of Great Religious Books,” Vanessa L. Ochs might simply have given her bona fides. An ordained rabbi, she is a professor in the Department of Religious Studies at the University of Virginia in Charlottesville and has a doctorate in the anthropology of religion from Drew University in Madison. She has also written, edited, or contributed to numerous Judaism-centered books, including “Inventing Jewish Ritual,” “The Book of Jewish Sacred Practices,” and “The Jewish Dream Book.”

But she feels she was particularly suited to author “The Passover Haggadah,” she said, because, with her background, “I was able to consider the Haggadah as a material object used in ritual and in innovated rituals, as well as a historical text; I could study it as an object as well as a literary, liturgical text.”

Ochs will speak on “The Contemporary Passover Haggadah” at The Jewish Center of Princeton on Thursday evening, March 12. She talked about the topic and her book with NJJN.

NJJN: What does a “biography” of a Haggadah mean? Is it the biography of the book or the people who use it?

Ochs: As an anthropologist who writes about material culture, I wanted to focus not just on how the words in the text came about; I wanted to do more than account for the history of the generation of a text…. I wanted to focus as well on what it means to have a particular book that is incredibly beloved to individuals and to families.

It’s such a quirky book: Unlike a Torah, which has to be stored in a particular way, the Haggadah is usually wrapped with a bunch of other Haggadot that you’ve used at the table. People haven’t fully shaken out the crumbs, the wine hasn’t dried, and there are brisket stains; they stick it in a box with the Passover mixing bowl and take it down into the basement or up into the attic.

If you think about a Maxwell House Haggadah, it is a sacred book that has an advertisement for coffee on it. Or, last year, in cooperation with Amazon, Maxwell House featured the “Marvelous Mrs. Maisel,” along with a stained index card with Midge’s brisket recipe.

This is a blurring between life and text, and I was curious to try to grasp how is it that one of our Jewish sacred texts would be in 6,000 versions.

NJJN: How do homemade Haggadot fit in?

Ochs: In the ’60s and ’70s, people were cobbling together Haggadot for their families or for women’s or interracial seders. When it was Passover time, you would see other Jews in Kinko’s, copying seders. Now, with available online tools, anyone can make a Haggadah, drawing on all sorts of resources and themes. People are sending their friends and families texts they’ve made, and they are asked, in the name of environmental concerns, to download the text and bring it on their phones and iPads.

NJJN: How did you conduct the research for this book?

Ochs: It was the hardest thing I ever did, and I worked on it for 10 years. I felt like I had to learn the scholarship in every single phase: Bible, Mishna, midrash, and Talmud. I had to learn about illuminated manuscripts and the first generation of print, just for starters. Once I learned that information, I needed to ask myself — given my perspective as a scholar of ritual and material culture — what new insights could I bring to areas where there has already been incredibly solid research?

NJJN: What kinds of sources did you use to create this biography?

Ochs: I did a lot of textual research. I went to Chicago to meet with Stephen Durchslag, who has one of the largest personal collections of printed Haggadot. I looked at the collections at the Jewish Theological Seminary, the National Library of Israel in Jerusalem, The Israel Museum, and at several beautiful kibbutz Haggadot in the Cotsen Children’s Library at Princeton University. In America and Israel I went into people’s houses and saw where and how they stored and displayed their Haggadot and heard the stories of the Haggadot they had.

NJJN: How has the role of a Haggadah, which is primarily designed to educate each generation about the Exodus story, changed?

Ochs: The Haggadah as an opportunity for pedagogy is usually a failed opportunity. The text is used by people who are not Jewish educators, by everyday people who may not know the Exodus story themselves. It has also become more complicated these days as people who come to our seder table are sons- and daughters-in-law and best friends who are not Jewish. People are coming to see a rite that is not familiar to them, and as hospitable as a Jewish family might be, it is part of a foreign experience.

NJJN: How are new Haggadot being designed to make the seder more meaningful to today’s participants?

Ochs: [Some offer interpretations of the text that convey] the human value of caring for the vulnerable; others are created to be more welcoming to interfaith users, or focus on caring for the stranger, “because we were strangers” — recognizing otherness and the need to relieve the pain of otherness. Or [they focus on] social justice; people seize on a problem, like Israel-Palestine peace, the environment, or food justice, and the issue is made analogous somehow to an enslavement, and then the Haggadah demonstrates how one can liberate the world or a segment of the population of that particular oppression and how you can leave the seder and go out into the world and honor the commitments you’ve made.

Even in traditional families, more devices have been brought in…. More and more families are introducing activities or props to address the fact that children and adults both have shorter attention spans and require more stimulus.