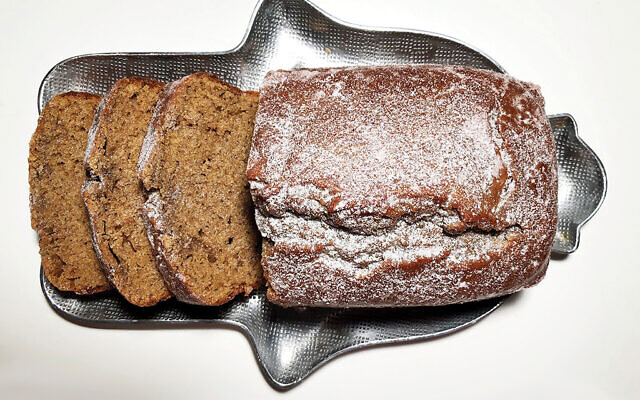 Preparing dishes made with oil, such as the traditional fried potato pancakes (latkes) and jelly doughnuts (sufganiyot), naturally recalls the miracle of the oil that lasted for eight nights instead of one — the heart of the Chanukah story. But there is also the less direct symbolism of incorporating dairy products into the Chanukah menu as a way to honor Judith, who saved the Israelites from the Assyrians.

Judith seduced the enemy general Holofernes with generous amounts of cheese and wine, and when he passed out she cut off his head with his own sword. Even though this story supposedly took place a couple of hundred years before the Chanukah event, it parallels the theme of courage over fearfulness.

Going back at least as early as the fourth century BCE, the Romaniote Jews (from the old term Romaioi that once referred to people of the Eastern Roman Empire) are considered to be the oldest Jewish community from Greece, as well as one of the oldest Jewish communities in the world today. They spoke their own dialect called Judeo-Greek, and were a different community from the Spanish/Ladino-speaking (Sephardic) Jews who came to Greece in the late 15th century when fleeing the Spanish and Portuguese Inquisitions.

Chanukah has traditionally been a minor Jewish holiday. But because of its proximity to Christmas on the calendar in the Western world (especially in North America), Chanukah parties and the custom of gift-giving have become more popular. Although most of the older individuals I spoke with shared with me that the holiday was not such a “big deal” in their home while growing up, they did recall eating a special food during that time that had some symbolic connection to the Chanukah story.

Marcia Haddad Ikonomopoulos, whose family has Sephardic roots from Salonika, shared that she always ate Prasa Keftedes (Ladino for “leek fritters” with eggs and matzah meal) and Boumwelos/Bumuelos (Ladino for “fried dough pastries” from the Old Spanish verb abuñolar, meaning “to brown”)  drizzled with honey. Rashel Cohen, whose family comes from the cities of Lárisa and Vólos in the Thessaly region, recalls eating leek fritters with a kosher sheep’s milk cheese called kasseri. On the first night she also ate fried balls of dough doused with honey and cinnamon called Loukoumades (likely from the Arabic luqma, meaning “mouthful/morsel”). 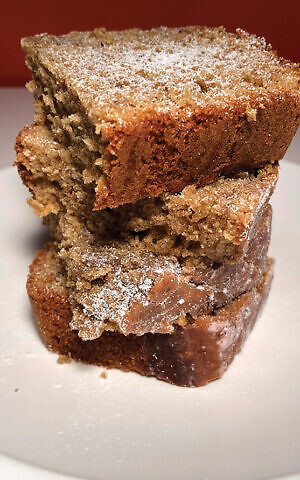 In “The Cookbook of the Jews of Greece,” Nicholas Stavroulakis lists a whole wheat pancake recipe from Ioannina called Tiganites that is made with honey, ouzo, and walnuts and fried in olive oil. In all of these special foods we see how the use of olive oil has been incorporated to recall the vessel of pure olive oil found by the Maccabees in the Second Temple after their victory over their Hellenistic/Greek oppressors.

The following is a recipe I developed that’s perfect for Chanukah but a departure from the more common fritter/pancake or fried doughnut, as it is fried in extra virgin olive oil rather than butter or vegetable oil. I also add milk and red wine to recall the dairy and wine that Judith fed to Holofernes to get him drunk before killing him in order to save the Israelites.

Although this style of cake fits more into the family of sweet breads like zucchini bread or carrot cake, the combination of olive oil and red wine with cinnamon, cloves, and lemon zest creates an earthy flavor that is not overly sweet.

1. Preheat the oven to 350 degrees F. Grease a standard loaf pan with olive oil, line the bottom with parchment paper, and set aside.

2. In a large mixing bowl combine all of the dry ingredients.

3. In a separate smaller bowl combine all the wet ingredients, then pour the mixture into the larger bowl with the dry ingredients and mix well into a smooth batter.

4. Pour the batter into the greased loaf pan. Place the pan on the center rack of the preheated oven and bake 50-55 minutes or until a cake tester or toothpick inserted into its center comes out clean. (It’s OK if a few small crumbs stick to the tester, but not sticky batter). Prepare the glaze.

5. Combine the glaze ingredients in a small saucepan and bring to a boil over medium heat. Reduce to a low heat and simmer, stirring constantly, for about 1 minute until all of the sugar has fully dissolved and has turned into a light syrup. Turn off the heat but leave the saucepan on the stove until ready to use.

6. Remove the cake from the oven and place on a trivet or the stove top. Quickly reheat the glaze for about 30 seconds just until warm, then generously brush the top and edges of the cake several times with the glaze using a pastry brush.

7. Let the cake cool about 45 minutes before running a thin spatula around the edges in order to more easily dislodge it. Invert the cake onto a clean countertop, then turn the cake upright and place on a decorative platter or plate. Serve at room temperature on its own sprinkled with powdered sugar and a little cinnamon or with a dollop of whipped cream on top of each serving. Cake can be stored in an air-tight container or large zipper-lock bag at room temperature for up to five days or in the freezer for two weeks.

Jennifer Abadi is a cookbook author and a historian of Sephardic
and Judeo-Arab recipes, food memories, and traditions (jenniferabadi.com).