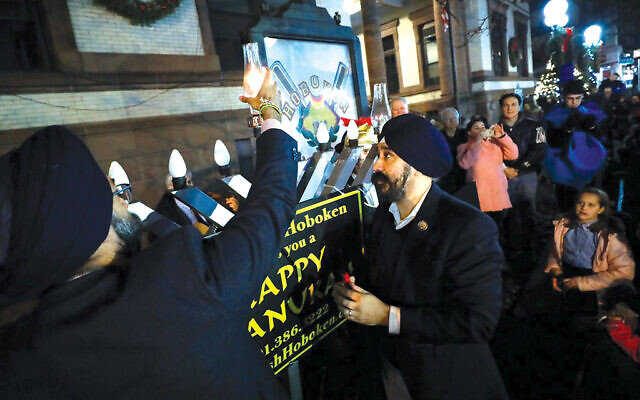 Attorney General Gurbir Grewal, at left, helps light the candle for the first night of Chanukah on Dec. 22. Photo Courtesy NJ Office of the Attorney General

During a visit to Golda Och Academy Upper School (GOA) in West Orange on Dec. 19, one week after the fatal attack at the JC Kosher Supermarket in Jersey City, N.J. Attorney General Gurbir Grewal reassured the sixth-12th-grade student body that the government is working hard to protect all “nine million of our residents.”

“We’re here shoulder to shoulder with each other and with you so you don’t feel any fear practicing your faith, coming to school, or anything about living your life,” he said.

He added: “There are so many good people in this world who are going to do everything they can to see that you thrive.”

While the criminal investigation into the Dec. 10 shooting that left four innocent people dead continues, Grewal said they are also trying to “unpack” why it occurred. Referring to the two perpetrators, who were killed by police during the shootout and who may have targeted Jews and the police, Grewal said he is trying to understand “Why did they have such hateful ideologies?”

Since the shooting Grewal has been meeting with different communities for “listening sessions,” including groups in Lakewood and Ocean County, and he said he’s come to at least one conclusion: teaching kindness has to become part of the curriculum. “We’re going to try our hardest to fix the curricula in schools so that we’re teaching how to be human as much as we’re teaching history and English and other topics,” he said. 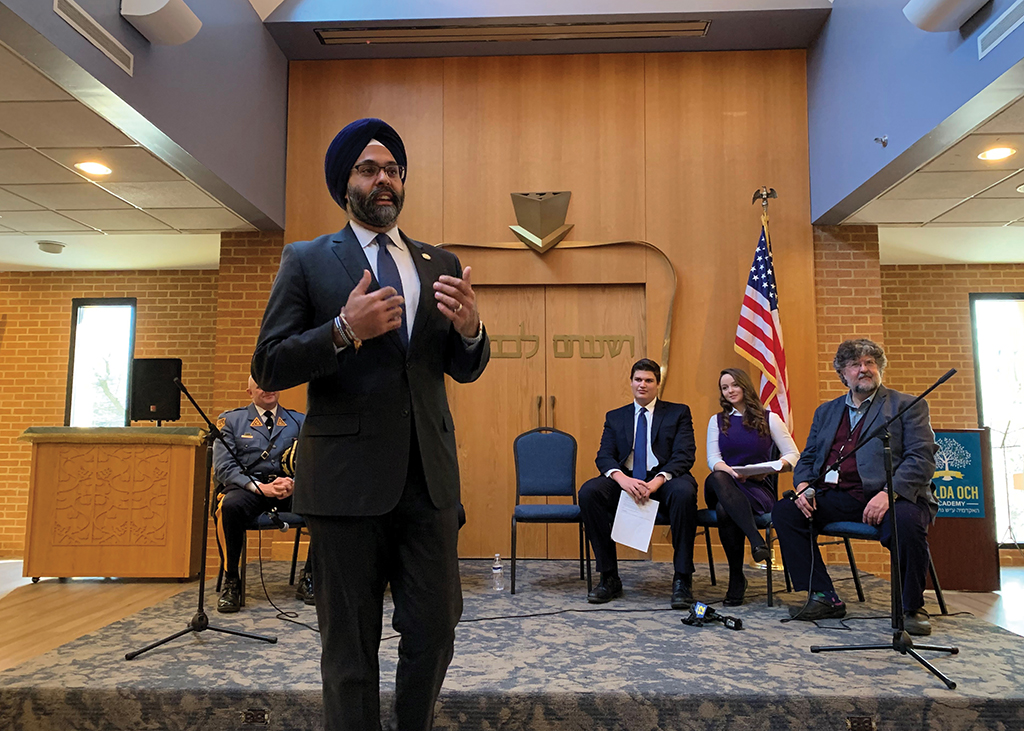 The visit — on the heels of an appearance at The Frisch School, an Orthodox yeshiva high school in Paramus, that morning and the Solomon Schechter Day School of Bergen County in New Milford earlier in the week, and just before visiting Chabad of Rutgers in the afternoon — was meant to let students and the larger Jewish community know that Grewal is focused on keeping them safe. He also discussed his core policy goals and described his personal journey to becoming attorney general, and responded to questions posed by GOA seniors Benjamin Hirsh and Eva Hale, both of South Orange, who were selected in advance to moderate a question-and-answer session following Grewal’s prepared remarks.

Focusing on Jersey City, Grewal described going to the scene of the attacks last week and noticing some young boys wearing yarmulkes waving and smiling from the yeshiva window above and to the left of the market. He decided to peel away to visit them, accompanied by a police colonel, and the head of school told him that the students were “hurting,” both because of the hours spent in lockdown during the shooting and because of the possibility that the Jewish community was targeted. When he went to speak with the children, Grewal said, “They just got up, unprompted, [and] started to clap.” They weren’t clapping for him, however, but for the uniformed officer with him. “They were so thankful that law enforcement was there to protect them at that moment.”

Grewal acknowledged that when it comes to anti-Semitism, the Garden State is trending “in the wrong direction,” and that “we all should be very concerned.” He observed that hate crimes have risen over the last several years, a trend that has continued, as of the 569 reported incidents in 2018 — 20 more than the year before and more than double the 282 incidents in 2016, according to statistics compiled by the FBI — approximately a quarter of the offenses fall into the category of anti-Semitism, and 40 percent have been perpetrated by young people. 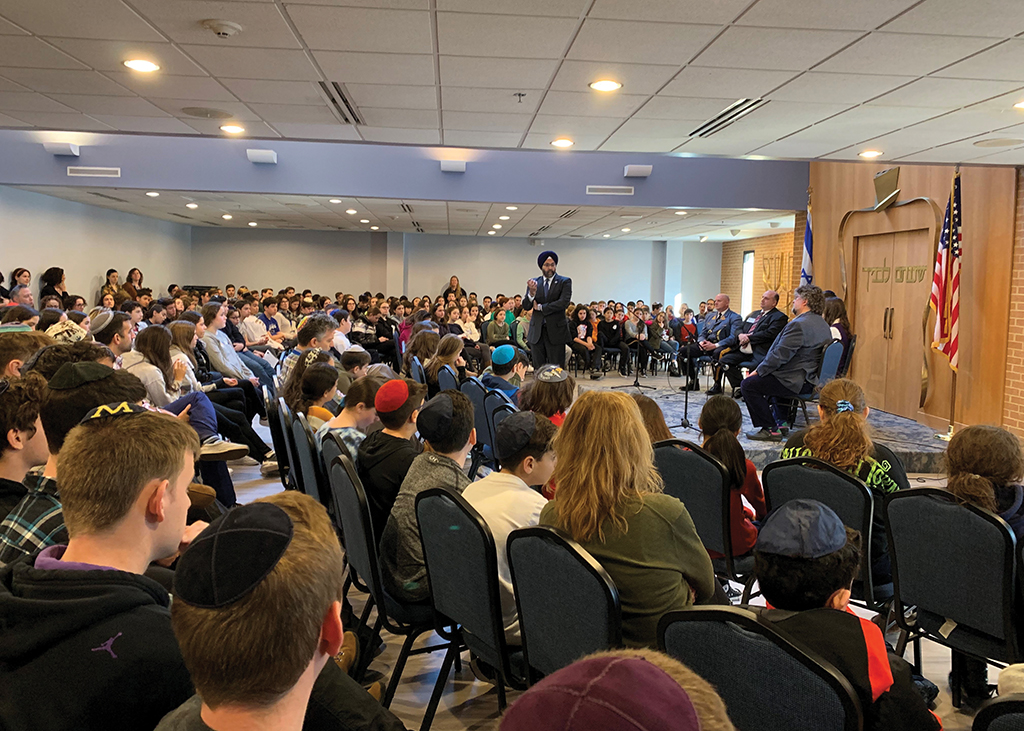 “That should be a wake-up call,” he said. “This is a real issue out here in New Jersey.”

Elected leaders, he said, are partially responsible for the increase in anti-Semitism and hate crimes.

“The political rhetoric that we’re seeing from elected leaders has taken the lid off, and … hate that had been on a low simmer is now boiling over,” he said.

A portion of the blame should also be attributed to social media, he said, noting that law enforcement officials are increasingly finding that juveniles will Snapchat a swastika and, when confronted, shrug it off, taking the attitude that “It’s just a swastika.” Social media also helps people who might otherwise be marginalized for their hatred find a like-minded online community that “normalizes” these fringe views and excludes voices who might challenge their beliefs, Grewal said.

In response, he said his office is “exploring every avenue” to hold social media companies liable, but he is also looking for a more serious response to the isolated swastikas appearing on Snapchat and school property. He’s also advocating for a mandatory attendance of classes on genocide and Holocaust studies. Regardless, the current response is “woefully insufficient,” Grewal said. 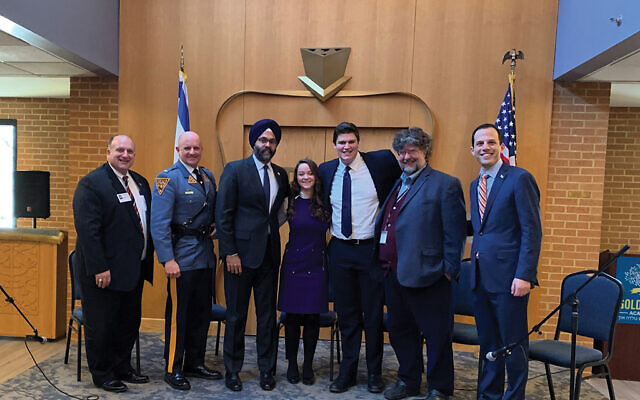 “That has to be a teaching moment when we have some sort of curriculum for that young person to know how hurtful what he did was, not just to the Jewish community but to all communities.”

Grewal quoted Nelson Mandela to explain his own approach to bias. “No one is born hating another person because of the color of their skin or their religion or their background. People must learn to hate. And if they can learn to hate, they can be taught to love.”

He hopes the people of New Jersey adopt a similar mindset to the widow of Douglas Miguel Rodriguez, the JC Kosher Supermarket employee murdered in the shooting. Through an interpreter she told the attorney general that she’s already forgiven the killers. “I don’t want any hate in my heart,” he recalled her saying. “I want to fill my heart with love, and just love the memory of my husband.”

She also asked, “How could anyone hate the Jewish people?”