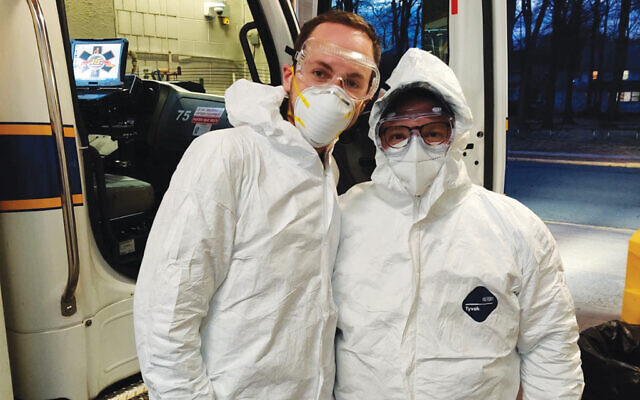 It was just after Purim in Teaneck. Elie Katz and Mark Schwartz were watching as the number of Covid-19 cases in their township, which includes a large Modern Orthodox community, spiked. They didn’t want a repeat of New Rochelle, whose Young Israel synagogue was the early focal point for the spread of the disease in New York state.

“We learned from New Rochelle,” Katz said. “We saw how serious this is.”

The Rabbinical Council of Bergen County called the March 12 meeting on short notice, bringing together every local pulpit rabbi, medical expert, and political leader, including Katz and Schwartz. Physicians described how devastating the disease could be, and local hospital officials forecast a likely shortfall in ventilators and a depletion of other resources.

Teaneck became one of the earliest municipalities in the country to take such sweeping steps. “We were the first,” said Katz.

Teaneck, like many communities, is still in the grip of coronavirus. As of April 23, there were 932 “presumptive” cases of Covid-19 in the township of 40,000, up slightly over the previous week, and 71 people have died of the disease. The Wall Street Journal reported that the town had more cases per 100,000 people than New York City. And the town’s heavily Jewish Teaneck Volunteer Ambulance Corps is still handling many more emergency calls than normal.

But the spread of the virus seems to be slowing.

Just a few weeks ago, Teaneck was the hardest-hit municipality in the hardest-hit county in New Jersey, making it what Hameeduddin called Bergen County’s “ground zero.” As of April 23, the county reported 14,049 positive test results and 907 deaths.

As of April 23, the number of Teaneck residents diagnosed with coronavirus was 932, surpassed by nearby Hackensack’s 1,051. “Our rate is tremendously going down,” Schwartz said.

Kazinci said that Teaneck had seen a decrease in the growth of the number of people being diagnosed with the virus. Between March 9 and 21, he said, it took approximately 1.98 days for the number of new cases to double. From March 22 to April 16, it took 7.6 days.

Jacob Finkelstein, a veteran member of the Teaneck Volunteer Ambulance Corps, said he has witnessed a weakening of the disease’s grip over a two-week period. Before the arrival of Covid-19, he said, the volunteers had handled an average of 12-15 emergency calls per day; at the height of the crisis, the number doubled; now it’s down to 17-20 per day.

Finkelstein said the independent, privately supported ambulance corps has already exceeded this year’s budget. And about half of the several dozen volunteer members are not on the job now because they or someone in their respective families was diagnosed with the disease. “It really has affected us.”

Prominent local Jews who died from causes related to the coronavirus include Perry Rosenstein, 94, a longtime civic leader and philanthropist who founded the Puffin Foundation; Janice Preschel, 60, an activist who ran a food bank; and Deborah Price Nagler, 66, a Jewish educator and technology consultant to day schools.

Teaneck is diverse, however, with large African-American, Hispanic, and Asian-American communities. “This is not a Jewish disease,” said Katz, who served as mayor from 2006-08 and as acting mayor in 2016.

He said the high number of Teaneck residents who submitted to early testing — before most other New Jersey communities — made the extent of the disease there appear even more dire. “We scared people enough to go get tested early. I think we were the most vocal — we brought more attention [to the importance of testing]. Now the rest of the world is following.”

The ongoing pandemic has had a visible effect on the town.  Shabbat mornings, when sidewalks and side streets are usually crowded with people headed to synagogue, are quiet. Parks are closed. Holy Name Medical Center has converted its pediatric unit into an isolation ward for coronavirus patients, half of its Emergency Department is an isolation ward for PUIs (“patients under investigation”), and the hospital reached out to its longtime competitor, Hackensack University Medical Center, for help. 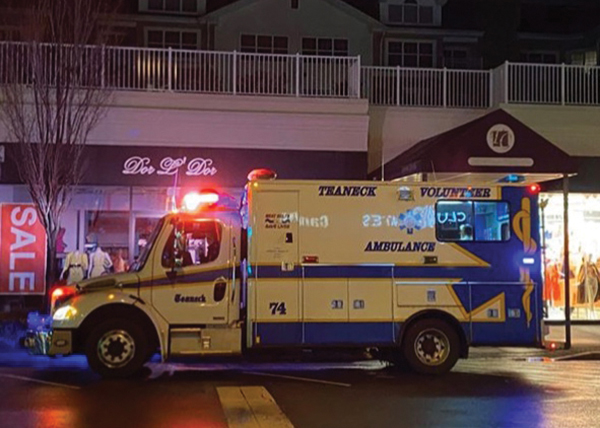 Though the number of calls the Teaneck Volunteer Ambulance Corps answers is now finally falling, the emergencies are still far more than normal.

The life-saving decision of the Rabbinical Council in March was not an automatic call.

Rabbi Larry Rothwachs of Congregation Beth Aaron in Teaneck told JTA that he had entered the post-Purim meeting with his rabbinical colleagues with one set of ideas about how his community should respond to Covid-19, and exited a few hours later with another: He was sure that drastically curtailing Jewish traditions and rules would be crucial to stem the spread of the deadly disease.

“I don’t think everybody was on the same page coming in. I was not on the page I am at right now,” the rabbi said. “By the time that we left, I do think there was an overwhelming consensus.”

“Not everyone was in favor of closing down the houses of worship,” he told NJJN. “I was yelled at by people — very angry, irate residents.”

Schwartz said he also met criticism from Teaneck residents, as did Schiowitz for the Rabbinical Council’s decision.

Now Katz and Schwartz are being hailed for their foresight.

The complaints largely stopped once the gravity of the coronavirus threat became apparent, Katz and Schwartz said. People are “appreciative,” Katz added.

“It was a brave move” by the rabbis and politicians, said Dr. Zvi Marans, a pediatric cardiologist who has lived in Teaneck since 1989. He said the proactive actions by the Rabbinical Council and the township, and the concurrent urging of residents to be tested for the virus, likely prevented the numbers of people who contracted the disease and died from it from rising even further. “It was super-effective,” he said. “They saved tens of lives — maybe even more.”

“I do not recall anything of this nature taking place,” Jonathan Sarna, a professor of American-Jewish history at Brandeis University, told JTA. “This kind of organized statement by a central body, telling every Orthodox synagogue to shut down, that I do not recall seeing.”

Rabbis from outside communities have approached Teaneck’s rabbis in recent weeks for advice about taking similar steps.

Katz has taken part in weekly, inspirational phone messages that are offered by clergy of various faiths.

Schwartz said he heard the other day from a member of a family whose son had spent a year studying for his upcoming bar mitzvah. No guests can be invited to the now small-scale event.

Steve Lipman is a staff writer for The New York Jewish Week, NJJN’s sister publication. He can be reached at steve@jewishweek.org.