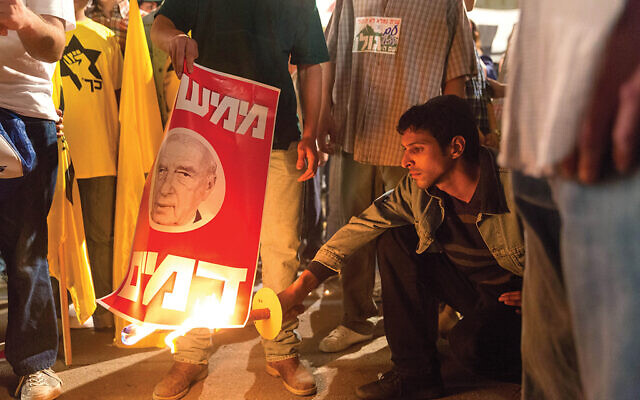 Making a fact-based historical film might look easy. The facts are there, the events are often common knowledge, and all the filmmakers have to do is provide a dramatic structure.

“It’s a minefield, and you don’t have a map,” he said in a phone interview last week. “When we made ‘Incitement,’ I realized that it’s much harder to do than to make something up from your own imagination.”

The problem, he said, is that “life doesn’t follow screenplays.”

Zilberman, whose two previous directorial efforts were the chamber-music drama “A Late Quartet” (2012) and the documentary “Watermarks” (2004), had never undertaken such a complex project before. He found the metaphorical minefield seeded with questions that kept nagging at him throughout the filmmaking process.

“When can you change the order of history?” he asked. “Do you have to follow the chronology completely? Does it matter when Yigal acquired his gun?”

Given the subject matter, the answers to such questions carry a weight that few directors ever face.

“This is such a sensitive topic, arguably the most traumatic event in Israeli history,” Zilberman says. “What we show on screen could have an effect on the discourse in Israeli society. One step in the wrong direction and you land on a mine and it explodes.”

That ominous realization has an impact on the dramatic choices he made, as well.

“If you show [Amir] as a monster, there’s little to be learned from that,” Zilberman explained. “If you go too far in the opposite direction, you make him too likeable. The more you suggest that he was incited to his act the more you alleviate his responsibility, but you have to show the forces that acted upon him.”

As the film’s title suggests, this last tightrope walk is at the center of the film.

Zilberman devised several ingenious responses to these conundrums, but in the end the answers were fundamental.

“We have to be responsible,” he said. “We did lots of research, four years of research, talking to everyone, reading all the material — the court files and transcripts, the investigations by the police and the security services.” His chief researcher even spoke to Amir in prison by telephone.

Of course, it’s not enough to “let the facts speak for themselves,” as the cliché goes. Inevitably, Zilberman and co-screenwriter Ron Leshem (author of the novel “Beaufort”) had to deal with how they would depict Yigal Amir.

The film begins as the initial Oslo agreement is announced on the White House lawn and follows the events as Amir experiences them. Played by Yehuda Nahari Halevi, Amir is almost never off-camera. Yet we watch him, both metaphorically and sometimes literally, from a distance. That effect was the product of careful planning by Zilberman and his excellent cinematographer Amit Yasour.

“We decided that in every scene [Amir] will be there, [that] we will not cut into security or surveillance or television footage; we are always following him,” the filmmaker said. “[Audiences] are accustomed to the [central character] being someone we like to identify with. That’s not the case here. [Yasour and I] decided to film events from Amir’s point of view, but never to allow for identification.” 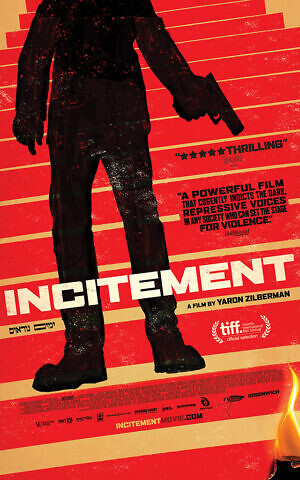 Think about the master of cinematic identification, Alfred Hitchcock. Hitchcock is constantly cutting between his protagonist and what the protagonist sees, bringing us into his mind and what aspects of him we can identify with. But Zilberman cleverly eschews the reverse-angle shot of the object of Amir’s gaze. Audiences watching “Incitement” will feel that they are watching Amir at an emotional remove; they see what he is doing and what he is seeing but won’t necessarily feel a kinship with him.

The effectiveness of such directorial choices had to be largely carried by Halevi’s performance. The actor was, Zilberman says candidly, cast because audiences would be unfamiliar with him.

“He acted in some TV shows, but he’s relatively unknown,” the director said. “That worked to our advantage because the audience could see him but wouldn’t remember him from other projects. He could immerse himself in the role completely,” with no prior associations to cloud viewers’ responses.

Halevi really did immerse himself in Yigal Amir. He and Zilberman worked together for a year in preparation. The actor enveloped himself in Amir’s world, whether it was going to a mikvah, wearing tzitzit and a kipa, or going to shul and praying three times a day. He watched hours of footage of the real Amir and read hundreds of pages of the killer’s words.

The result rewards all that work. It would be worse than flippant to say that Halevi “becomes” Amir, but his stunning performance carries the film, from the opening images of the young man cleaning a family grave to the final image of him fading into the darkest recesses of history.

As for the impact on Amir of the various authorities who spurred him on, that is a difficult issue that the film handles deftly. A lot of screen time is spent in the debates among the ultra-right nationalist rabbinate as to whether Rabin is “an informant” or “a pursuer,” an active conspirator against Israel or just a dupe, and the discussions are presented with admirable clarity. Zilberman and Leshem depict the rabbis behind Amir as a spectrum running from fervent, even irrational true believers to cynics who will wink at the assassin’s plans without overtly endorsing them. The screenplay is also careful to note that there were authorities who categorically and emphatically rejected any justification for murdering Rabin. As Amir’s father says, “A Jew doesn’t kill another Jew, whatever the reason.”

To its credit, “Incitement” also insists on the multifaceted nature of the anti-Oslo community; Zilberman shows the fractures and divisions — Ashkenazim vs. Mizrahim, class divisions, racism against Yemenite Jews like the Amirs — and basic differences of opinion and ideology.

But why make this film now?

“In every election in Israel they talk about the assassination,” Zilberman said. “It’s a conversation that’s alive every year, everywhere in the world. People will see the film as a cautionary tale; perhaps they will take more responsibility for their words and actions and inciting people against others. It’s a responsibility we all have.”

“Incitement” will be the opening-night program of the 20th annual New Jersey Jewish Film Festival on Thursday, March 19, at 7 p.m. at JCC MetroWest in West Orange, followed by a reception. Thirty films — shorts, features, and documentaries, many of them award-winning — will be screened at the 11-day festival, which will also feature special events and speakers. To become a sponsor, visit jccmetrowest.org/njjff or contact festival director Sarah Diamond at sdiamond@jccmetrowest.org,
973-929-2938, or 973-530-3417.