A challenge for you: Try not to smile when looking at Sue Brown’s knitted family lounging on a chair, adding a confetti of color to the living room of her Livingston home. Most of her dolls stand just over a foot tall, adorned with striped sweaters, bright pants, and matching scarves. They’re smushy — softer than you might expect — and sport a riot of hair; blue, black, or brown eyes either close set or wide apart; big grins or grimaces; and small pink noses.

This particular family will be donated through the National Council of Jewish Women (NCJW), something Brown has been doing with her creations for several years.

She’s matter of fact about the whole endeavor. A knitter since childhood, and naturally creative, she had knitted so many gifts for family members that they finally protested. Even so, she was not about to stop, and eventually she joined the NCJW knitting group known as Creative Hands. Its products, including blankets, hats, shawls, and other items, are sent to a variety of local nonprofit organizations from CASA (National Court Appointed Special Advocate Association for children) to nursing homes and hospitals. The group first started knitting dolls as a joint project with JCC MetroWest in West Orange; the dolls were sent to families in Sandy Hook, Conn., in the aftermath of the 2012 mass shooting. Recently, Creative Hands decided to restart the project. Of course, Brown, along with some of the other knitters, got their needles ready.

The concept is based on Izzy dolls, also known as “duduza” or comfort dolls, sent to children in war-torn areas, places rocked by natural disaster, or locations overwhelmed by poverty. They were first created by Carol Isfeld of Canada so her son, Master Corporal Mark Isfeld, could distribute them to children where he was stationed on United Nations peace-keeping missions, beginning in Croatia in the early 1990s. After he was killed by a land mine explosion in 1994, his unit asked Carol to keep sending the dolls so they could continue to distribute them, referring to them as Izzy dolls in his memory. 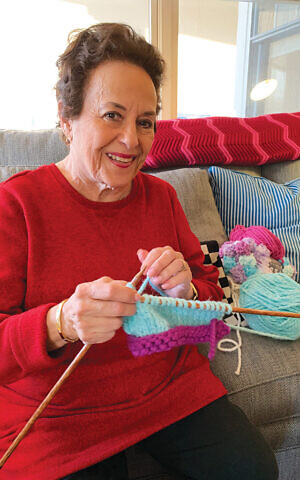 Sue Brown begins to knit a new Izzy doll in her Livingston home.

Word got out about her little project and when others voiced interest in participating, Carol published a free pattern online. By 2014, more than 1.3 million comfort dolls had been distributed through official Canadian channels and charities, and many more unofficially via volunteer organizations like NCJW.

Many of Sue Brown’s Izzy dolls find their way to the Valerie Fund, which provides treatment for sick children at medical facilities near their homes. It was named for Valerie Goldstein, a 9-year-old from Warren who died from cancer in 1976.

“I knew the parents of Valerie, and her sister, and it was just something I wanted to do,” Brown said. “I feel like I’m doing a really good deed.”

It was difficult for Brown to envision the final product while working from the pattern.  “I got more involved as I saw it taking shape and I saw it coming together,” she said. “And then you get a little personality in the face. I think the hair has a lot to with it.”

The original Izzy dolls are quite small, just 5 or 6 inches, and designed with hats for boy dolls or braids for girls. They were made with thin yarn and had to be small since they were shipped in bulk overseas.

But Brown put her imagination and ingenuity to work on dolls that would be donated locally. She added wild, colorful hair, and started using thicker yarn and bigger needles, creating dolls much larger than the originals. She still also makes tiny ones, as well as medium-sized 10-inch dolls. But she favors the large ones, and takes her time choosing the colors for each one. She estimates she’s knitted over 100 by now.

Her goal remains more or less the same as the original mission: to comfort kids who sorely need some extra affection.

For the children who are stuck in a hospital getting a chemotherapy drip, receiving the knitted items from NCJW — whether Brown’s dolls or the hats, caps, shawls, and blankets the group knits, “is one of life’s little niceties,” said Valerie Fund executive director Barry Kirschner. “It warms them up, and it’s a little present, so they know someone loves them. It goes a long way.”