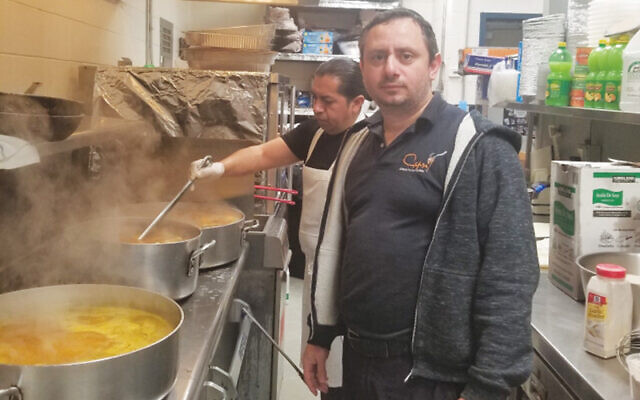 The kosher scene in central Jersey continues to evolve; now two kosher restaurants have closed their doors and moved, both with the aim of expanding their catering operations.

Capri Kosher Italian Cuisine in Manalapan shut down after five years in operation, according to owner Vitaly Abramov, so he can concentrate on his catering business, Capri Kosher Catering. The business is now based in Shalom Torah Academy in Morganville.

Bistro 70, which was the only restaurant located inside Rutgers Hillel’s Eva and Arie Halpern Hillel House on the New Brunswick campus, has relocated its catering operation, also called Bistro 70, to Congregation Sons of Israel in Manalapan, said owner Dahlia Barness. She has also owned The Orchid, a kosher meat restaurant in Metuchen, for 19 years.

Both Capri and Bistro 70 are under Star-K kosher supervision. Andrew Getraer, executive director of Rutgers Hillel, said its leaders made a “business decision” to switch its kashrut authorization service to the Orthodox Union. But obtaining the OU hechsher, or kosher certification, is taking longer than anticipated, temporarily preventing another establishment from moving into the space formerly occupied by Bistro 70, said Getraer.

In the case of Capri, its owner, Abramov, said that “keeping the restaurant was never our goal.” He told NJJN that he had extensive catering experience in New York, including owning a company, but when he relocated to New Jersey, he took a five-year lease on the Manalapan location — site of the former Levy’s Kosher Italian Restaurant — to establish a customer base and burnish his culinary reputation. He also offered catering out of Capri.

Abramov said he hoped another kosher establishment would move into the Manalapan restaurant site, but for now, it remains empty.

Capri’s closing presents a problem for Rabbi Robert Pilavin of Sons of Israel in Manalapan, who held a weekly Torah class at the site — first at Levy’s, then at Capri — for 16 years. Yet, he is excited that for the first time in its history, his Traditional synagogue has an exclusive caterer on site.

When Bistro 70 began operating in Sons of Israel this past summer, Pilavin said, “we had to make a mental adjustment that these were no longer our kitchens.” Bistro 70 exclusively occupies the synagogue’s dairy and meat kitchens; the congregation still has use of its pareve kitchen.

Since becoming operational, Pilavin said, Bistro 70 has prepared kiddushes, birthday parties, and life-cycle celebrations; the congregation has been pleased with the results.

Bistro 70 owner Barness told NJJN that their former location, at Rutgers, “didn’t suit our needs anymore. We needed a base and approached various places.” Sons of Israel was “very welcoming so we chose to have a contract with them.”

She said her catering business has been growing steadily, and she is now also the exclusive kosher caterer for the Holiday Inn and Top Golf, both in Edison. Bistro 70 has also provided kosher fare for other businesses and prepares meals for kosher meals-on-wheels for the Jewish Family Services of Middlesex County. Bistro 70 has in the past catered weddings, bar and bat mitzvah parties, baby namings, and other events.

“We have seen instances where [businesses] order for several people, but if they have enough people who ask for kosher, they just order kosher for the whole event,” said Barness.

Abramov, a native of Azerbaijan in the former Soviet Union, said that country is known for its varied cuisine, owing to its location as a crossroads between Europe and Asia.

“It is a top culinary destination for people who really love food,” he said. “I apply all these things from my experience into my food, and people seem to really like that. I mix Sephardic food with Ashkenazi food. I do a lot of combinations mixing and matching ingredients. People have found it very interesting.” He said customers respond enthusiastically to Capri’s eclectic mix of “Italian, Greek, Chinese, Mediterranean, southern Russian, and Eastern European cuisine.”

During his years in the New York catering business, Abramov was also the caterer for Hillel at Brooklyn College. In New Jersey, he caters events and provides meals for Capri’s host, Shalom Torah Academy, and for Yeshiva Gedolah of Cliffwood, Kollel Hora’ah of America in Marlboro, and Royal Montessori in Manalapan, which is not a Jewish institution.