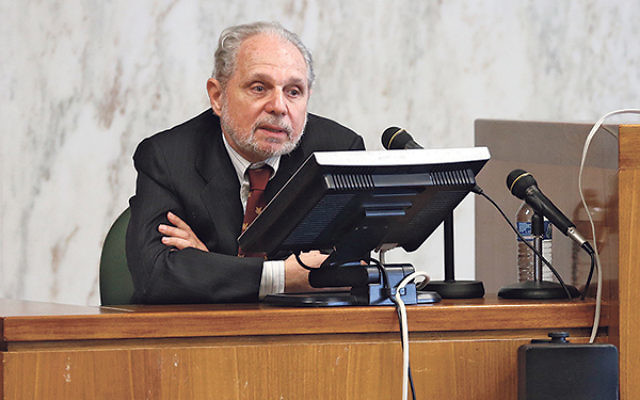 The cofounder of an Orthodox-based group that promised to help gay clients “to leave the homosexual lifestyle” was called to the stand June 8 by plaintiffs claiming the organization violated New Jersey’s Consumer Fraud Act.

In the second day of the trial in Hudson County Superior Court, lawyers for the plaintiffs challenged the credentials of Arthur Goldberg, codirector of the Jersey City-based JONAH, noting that he referred to himself as a rabbi although he was never ordained.

Three Jewish men and a Mormon claim that JONAH failed in its promises to “convert” them from gay to straight.

On June 3, the opening day of the trial in Jersey City, a lawyer for the plaintiffs accused the group of performing “junk science” and said the idea that homosexuality can be “cured” by therapy has been discredited by the mainstream medical and psychological community.

Lawyers for JONAH said the organization’s practices are protected under religious liberty and free-speech laws.

The closely watched outcome may determine whether a faith-based group may claim that homosexuality is a “disorder” that can be “cured” by treatments offered by groups like JONAH.

New Jersey, California, Oregon, and the District of Columbia have banned the practice.

Plaintiffs Benjamin Unger, Chaim Levin, Sheldon Bruck, and Michael Ferguson and the mothers of Levin and Bruck are being represented by the Southern Poverty Law Center, a civil rights organization based in Montgomery, Ala.

In his opening argument, SPLC deputy legal director David Dinielli said that three of the plaintiffs “all are gay and were defrauded by a promise of spending money to turn them from gay to straight.” He said that those who dropped out of JONAH’s two-to-four-year program were told they were destined for “sad, lonely lives” with the possibility of depression, suicide, pedophilia, and dying of AIDS.

Opening for the defense was Charles LiMandri of the California-based Freedom of Conscience Defense Fund.

LiMandri argued that for most of the time they were involved with JONAH, the plaintiffs were pleased to be moving away from the same-sex attractions that brought them into conflict with their devout religious lifestyles. Unger, Levin, and Bruck were raised as Orthodox Jews.

JONAH, whose original name was an acronym for Jews Offering New Alternatives for Healing, was founded in 1998 by two NJ Jewish couples whose adult children “had become involved in homosexuality,” according to its website. The site asserts that it “can help those seeking a choice to leave the homosexual lifestyle.”

In his testimony, Unger said he was a 19-year-old Modern Orthodox Jew when his parents enrolled him in JONAH in 2007. He believed his religious destiny included marriage to a woman and fathering children. But when he started to develop same-sex attractions, “I began having stress,” which continued to grow and turn into depression while he was attending yeshivas in Brooklyn and Jerusalem, he testified.

Unger’s most emotional moments of testimony came when he told the jury that JONAH leaders suggested that his close relationship with his mother was a major “cause” of his homosexuality.

During group therapy sessions he was instructed to put a pillow on the floor, imagine it to be his mother, and smash it repeatedly with a tennis racket.

Frequently wiping tears from his eyes, Unger told the jury how disturbed he felt at “going through all of this because of my mom…. I was horribly cold to her. She turned to me one day and said, ‘What did I do wrong?’ and I didn’t know how to answer. That was the lowest point in my relationship with my mom.”

Under cross-examination by LiMandri, Unger acknowledged that he wrote positive e-mails about JONAH on a listserv for participants in the program, but said he became increasingly disillusioned and depressed until he left JONAH 11 months after enrolling.

Now, at the age of 27, Unger said, he is no longer Orthodox, has a close relationship with his mother, works as a bartender, and fully accepts himself as a gay man.

On the trial’s second day, the plaintiffs’ lawyer Lina Bensman pointed out that Goldberg was a disbarred attorney who in 1989 was incarcerated for six months on federal tax fraud and conspiracy charges while heading a New York underwriting firm.

She asked why he had occasionally identified himself as a “doctor,” although he was not a physician and had no PhD.

Goldberg also acknowledged that he used the title “rabbi” on occasion, although he was not ordained.

“I was not a rabbi,” he said. “I have no formal religious training other than going to a yeshiva in grade school.”

Goldberg also testified, “I have never been a licensed counselor. I give advice.”

But after being shown a signed document projected on a video screen, Goldberg acknowledged he had applied to the American Psychotherapy Association to become a certified relationship specialist and a certified professional counselor.

“But these certifications were revoked?” asked Bensman.

“And the certifications read, ‘I certify I have not been convicted of a felony’?”

“That is correct,” he said.

Under questioning by his own attorney, Goldberg said he believed that his felony fraud and conspiracy convictions were essentially nullified more than 20 years after his guilty pleas in 1989, allowing him to check “no” on the application.

“Did you ever use these titles after they had withdrawn the certification?” asked his lawyer.

Goldberg described himself as an Orthodox Jew and former president of Congregation Mount Sinai in Jersey City.

His intention, he said, is “to help people achieve their personal goals…. We want to help people overcome their homosexual feelings in a Torah-true way.”

“What do you mean by a Torah-true way?” asked his attorney.

“It means following the written Torah, which is the Five Books of Moses. We look at it from a religious belief system of what the Torah says,” he said.

“In all the history of Judaism we were forced to convert many times. I believe in free choice. God has given us free choice,” he said. “If people are happy being gay, I’ll use a Yiddish phrase: ‘Gei gezunterheit’ — ‘Go and be happy.’”

The trial is expected to continue for several more weeks.