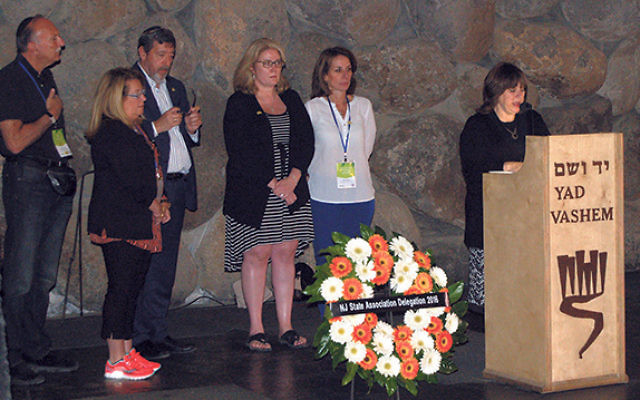 JERUSALEM — Fifteen legislators from New Jersey participated in a mission to Israel, meeting with Israeli government officials, dining with “lone soldiers,” and touring the West Bank to visit a Jewish settlement and witness an initiative there led by Palestinians and Israelis interested in dialogue.

The Feb. 26-March 3 study mission was the second such trip sponsored by the NJ State Association of Jewish Federations; the first was held in 2014.

“The mission is designed to provide NJ legislators a broad view of the tough challenges Israel faces, along with the opportunities and innovations that Israel offers the world,” said association president Mark S. Levenson, who chaired the mission

The mission was cochaired by two Assembly members who also participated in the mission two years ago, Holly Schepisi (R-Dist. 39) and Pamela Lampitt (D-Dist. 6).

Legislators paid for their own airfare while in most cases the Jewish federations covered ground costs, according to State Association executive director Jacob Toporek (see sidebar).

When NJJN met up with the mission in Jerusalem on the third day of the tour, many of the legislators said the trip helped provide a better understanding of the connection between Jewish constituents and Israel.

The mission fulfilled a “real, visceral need to see Israel for myself,” said Assemblyman Tim Eustace (D-Dist. 38). “New Jersey and Israel are incredible partners in many things. Many of my constituents are Israeli Americans and Jewish Americans. I like to serve my constituents with a real sense of who they are.”

Sen. Nia Gill (D-Dist. 34), said that as a lawmaker and an African-American, she was particularly interested in visiting the Israeli Parliament as well as observing the integration of Ethiopian Jews in Israeli society, and exploring the conflicts between Palestinians and Israelis.

The legislators, who were joined by their families and members of various NJ Jewish federations, met with Minister of Energy and Water Resources Yuval Steinitz, U.S. Ambassador to Israel Dan Shapiro, Speaker of the Knesset Yuli Edelstein, and several senior-level officials from the Foreign Ministry.

“The legislators want to learn what Israel can offer in terms of homeland security and anti-terrorism, and to get a deeper perspective on the economic relationship between New Jersey and Israel. There is about $2 billion in trade between the two states,” said Levenson, former president of the Jewish Federation of Greater Clifton and Passaic.

Many legislators described day 3 of their journey as the most inspiring. The group visited Yad Vashem Holocaust Memorial and then traveled to the Jewish settlement region of Gush Etzion in the West Bank. There they saw the junction where three Israeli teenagers, Gilad Shaar, Naftali Frenkel, and Eyal Yifrach, were kidnapped and murdered in June 2014 — an event that precipitated that summer’s Operation Protective Edge in Gaza.

On behalf of the Clifton and Passaic federation, Levenson presented Mayor Davidi Perl of Gush Etzion a check for $125,000 toward “The Boys’ Promenade,” a construction project in memory of the three teens. Levenson and his wife, Eta, presented the check in memory of their son Eric Eliezer, 28, who died three weeks prior to the mission.

The mission then visited the Shorashim [Roots] Center, a local initiative led by Palestinians and Israelis interested in dialogue. Palestinian activist Ali Abu Awwad and Jewish activist Shaul Judelman shared with the legislators their personal tragedies on both sides of the conflict, and the need to move forward toward a peaceful dialogue.

Abu Awwad described his upbringing by a mother who was a PLO leader with close ties to Yasser Arafat, and the ideological transformation he experienced after being imprisoned for throwing rocks at settlers when he was 17.

“I realized that something is missing from this conflict — our humanity. Being nonviolent in such a conflict is like being an artist of your humanity,” Abu Awwad told the legislators. “Peace is to be courageous enough as a leader to say violence is a crime. If this place has peace it will be the best Democratic example to the Arab world.”

Assemblywoman Marlene Caride (D-Dist. 36) described their presentation as “empowering. The world in general is becoming more and more aggressive as the conflicts grow,” she said. “We need to learn how to understand our neighbors and how to live together because we are each an integral piece of the puzzle of this world.”

She also described her visit to Yad Vashem as an “emotional roller coaster ride.”

“To think that countries throughout the world allowed it to happen is incomprehensible,” Caride said. “My roots are Cuban, and to know that the Cuban government refused to allow the [St. Louis] refugee ship from Germany to dock [in 1939] was disappointing, to say the least.”

Assemblywoman Nancy Pinkin (D-Dist. 18) was surprised by the youth of the soldiers, most of whom are inducted into the army at age 18. The delegation had Shabbat dinner with lone soldiers, young men and women from around the world who come to Israel by themselves to join the Israel Defense Forces.

“People from the outside do not see Israel from the day-to-day perspective,” Pinkin said. “Part of the message I am taking home with me after visiting Yad Vashem and Roots is, ‘What does it take to be an agent of change, and how do you keep moving forward? Why did so many people not take action to stop the Holocaust?’ I am still digesting what I saw and felt today, and I can’t even really talk about it yet.”

Mission cochair Lampitt grew up in a Conservative Jewish family, but the Legislators Mission in 2014 was her first visit to Israel. “This is our only opportunity to determine what is really happening here. To drive through the West Bank helps us understand how close it is to Jerusalem and to better understand the challenges of coexisting peacefully,” she said.

“Our Yad Vashem guide talked about her personal family experiences, and it became much more experiential for us. I will now be able to better convey the struggles and to continue to be prideful of being Jewish.”

Assemblyman Gary Schaer (D-Dist. 36), an Orthodox Jew who lived in Israel for two years, said the mission provided a unique opportunity to interact with his legislative colleagues. Schaer and Assemblywoman Valerie Vanieri Huttle (D-Dist. 37), who also participated in the mission, are currently cosponsoring a bill that would prohibit investment by state pension and annuity funds in companies that boycott Israel or Israeli businesses.

“It is critical the legislators have a better understanding of Israel. Many members of Congress started in state legislature, including Donald Norcross, who participated in the first Legislators Mission to Israel,” Schaer said, referring to the current U.S. Representative from NJ’s Dist. 1. “We are laying the framework for other legislators who may reach higher office on a federal level, where their understanding of Israel is tremendously important.”