Secure Community Network’s new white paper makes recommendations on how synagogues should assess their security needs. Shown is a police officer standing guard outside Temple Sinai in Pittsburgh on Nov. 2, 2018, one week after a gunman killed 11 congregants at Tree of Life synagogue. Getty Images

Deciding to hire an armed guard is neither simple nor the sole answer to security for synagogues and other Jewish institutions. That’s the message of a white paper titled “Firearms and the Faithful: Approaches to Armed Security in Jewish Communities,” released by the Secure Community Network (SCN) on Jan. 15.

“Armed security can be part of a plan, but it is only that — a component,” it warns. Without a multi-layered and broader security plan, “armed security will not be as effective. It could even create more confusion … or exacerbate a volatile situation.”

The paper comes out during a time when Jewish institutions throughout the state, and around the country, have held passionate conversations in the boardroom about how best to respond to a rise in violent anti-Semitic attacks, particularly in the aftermath not only of the recent attacks in Jersey City, Brooklyn, and Monsey, N.Y., but also the mass shooting which killed 11 congregants at the Tree of Life Congregation in Pittsburgh in October 2018 and the murder of a woman at the Chabad of Poway in California in April 2019.

Stakeholders embroiled in conversations about whether to hire armed guards — including the financial and training ramifications — also hear concerns over the presence of guns and fears of situations with weapons gone awry.

In addition to offering advice on how to evaluate necessary security protocols, one of the most basic questions the report raises is: Will the presence of firearms divide our community?

The document provides general guidance for congregations undertaking security but focuses on specific issues to review when considering hiring armed personnel. Its primary recommendation is that if an institution is going to hire an armed guard, it should be employing a police officer, on- or off-duty, working or retired, who continues to maintain relevant certification and training.

“This document helps someone who is frozen and doesn’t know which way to go,” said Wilson. “It gives a basis from which to make a decision.”

SCN works on behalf of federations nationwide under the auspices of The Jewish Federations of North America and the Conference of Presidents of Major American Jewish Organizations. The paper comes out of an August 2019 meeting of law enforcement and security experts who gathered to provide a blueprint for Jewish institutions making security decisions. The 23-page result reviews the threat based on FBI hate crime data and provides questions designed to provide a process for institutions to use in creating a layered security plan. 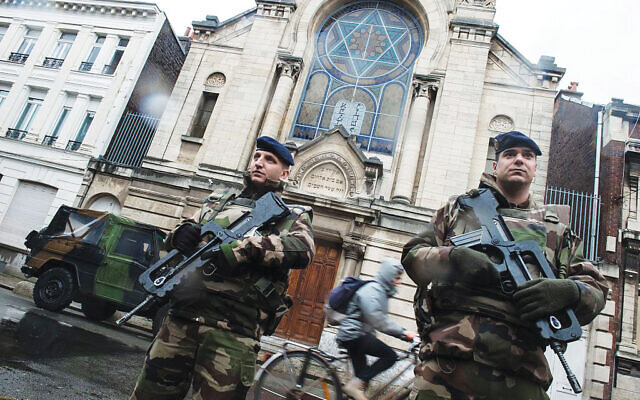 Soldiers stand guard outside a synagogue in France following the mass murder at a satirical magazine and a kosher grocery store that left a total of 17 people dead in January 2015. Philippe Huguen/AFP via Getty Images

The group of nine who gathered in August included federation and SCN security directors, police department chiefs and superintendents, and a former counterterrorism coordinator for the U.S. Department of Homeland Security. Michael Masters, national director and CEO of SCN, and Patrick Daly, principal deputy director and COO of SCN, moderated.

SCN offers eight factors to consider in setting a policy involving armed guards. They include ensuring the institution is implementing a broad security plan, understanding the legal implications, recognizing the training required, assessing the financial burden, coordinating with local police, and realizing what can go wrong — for example, when the armed security personnel is not properly trained to deal with someone with mental health issues or who is a violent, but unarmed, intruder.

Wilson acknowledged that most local institutions have already considered the issues discussed in the paper, but he pointed out that there are “quite a few” synagogues that have been “really torn” over this issue.

Although he declined to provide details, he said that there are a “significant number” of local institutions that have decided to hire armed personnel onsite. Likewise, plenty of others have determined that they prefer to secure their institution without the use of weapons.

Despite the fact that so many Jewish institutions have already grappled with this issue, Wilson suggested the document can still be useful. “It’s an opportunity [for synagogues and other institutions] to circle back and reflect on what they are doing and making sure they are achieving what
they want.”

He advises congregations to ensure they are meeting all three components of a secure community. These include congregants, procedures, and equipment. “If you just have a security guard, and you don’t have any emergency procedures, and your people aren’t trained in how to respond during a violent encounter or any type of incident — any kind of emergency or a heart attack or some other traumatic incident — then you have a less-than-complete program.”

As Wilson pointed out, “Most institutions just want to be safe, but it’s not that simple.”