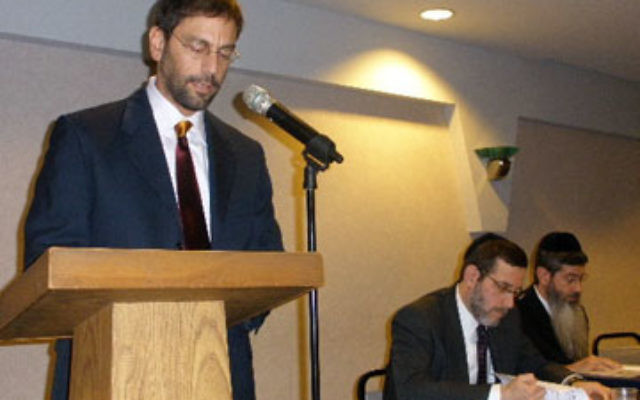 Despite some debate in traditional circles, many Jewish religious authorities have endorsed organ donation as a mitzva because it can help to save the life of another person.

Yet rabbinic debate over the concept of “brain death” has caused enough confusion that Israel was kicked off an international organ donation registry several years ago because so few Israelis were registered as potential donors.

Berman was one of three panelists at the Nov. 14 Orthodox Forum of Edison/Highland Park held at Congregation Ahavas Achim in Highland Park.

Joining him were Dr. Michael Eleff, medical director of the Cancer Institute of New Jersey in Hamilton and assistant professor of medicine at the University of Medicine and Dentistry of New Jersey-Robert Wood Johnson Medical School in New Brunswick, and Rabbi Dovid Goldwasser, an author and leader of Congregation Bais Yitzchok in Brooklyn.

Goldwasser cited “the preciousness of human life” in endorsing organ donation. “We learn in the Talmud that every mitzva can be suspended to save a human life,” he added.

While there is strong support for Goldwasser’s position within the Orthodox rabbinate, it is not uniform. Berman said despite all efforts, only 9 percent of Israelis are listed as organ donors compared to between 35-40 percent of Americans. Fifty-eight percent of Israelis refuse to donate the organs of a brain-dead loved one, citing religious assertions that an individual remains alive so long as his or heart is beating.

Berman is optimistic, however, that the tide may be turning. The Israeli chief rabbinate ended a 23-year stalemate with medical authorities and gave their blessing to transplants this year — reaffirming a 1986 ruling that a beating heart does not constitute life. In exchange, medical personnel involved in transplants agreed to undergo a three-day training course in the halachic issues surrounding transplants.

The Knesset passed a law, which has not yet taken effect, that would automatically move Israelis with organ donor cards to the top of the list should they need a transplant.

Berman said while he respected those whose religious beliefs would preclude their giving organs while their heart is beating, these people “should give up their right” to receive transplants. He also questioned the hypocrisy of such people going on transplant lists — ostensibly accepting organs from people they believe were “murdered.”

The HODS has created its own donor card; visit hods.org.