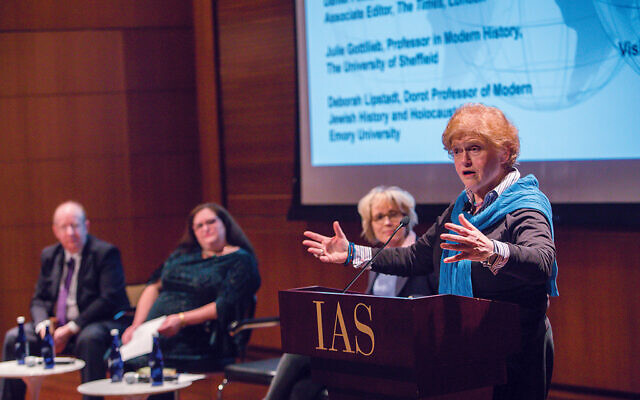 Deborah E. Lipstadt, at right, historian and author of “AntiSemitism: Here and Now,” was one of three panelists in a program at the Institute for Advanced Study in Princeton. Photo by Andrea Kane/IAS

We live today in a society where the moral guard rails have come down and we have to help establish them and set them up,” said Deborah E. Lipstadt during a panel presentation on “Anti-Semitism — Past and Present” held at the Institute for Advanced Study (IAS) in Princeton on Feb. 5.

Her comment was made in the context of how to combat anti-Semitism, which she called “the oldest hatred,” and one she said she’s not sure “we can ever wipe out.” But she did have suggestions for the rapt audience of over 200 in the packed theater, including challenging hate-filled comments and exposing their “delusional quality.” She likened this strategy to being the “unwelcome guests at the dinner party” by speaking out and educating those in proximity to the one who is goading.

Lipstadt is the author of several books, most recently “AntiSemitism: Here and Now” (Penguin Random House, 2019). The two other panelists, both from the United Kingdom, were Julie Gottlieb, a professor in Modern History at The University of Sheffield, and Daniel Finkelstein, associate editor of The Times in London and a member of the House of Lords.

During her introduction, moderator Karina Urbach, a historian and visiting scholar at IAS who is originally from Germany, recounted interactions she’d had with German historians at academic conferences that she said make her “anxious.” For example, she said one colleague excused Emperor Wilhelm II’s comments from the 1920s — among them that Germany won’t have peace until “all the Jews have been slaughtered” — as so-called “reactive anti-Semitism”; another, she said, white-washed the guilt of William II’s oldest son, a Nazi sympathizer.

“Something is happening in our society and we do not know if we will soon face a tidal wave or a tsunami,” Urbach said, before positing a horrifying question to the audience: “Is anti-Semitism and a rehabilitation of Hitler’s supporters now socially acceptable?”

However, the panelists’ responses lacked prognostication and instead seemed like three disconnected presentations by experts in their fields.

Lipstadt’s comments were primarily rooted in her newest book. She’s a Modern Jewish History and Holocaust Studies professor at Emory University in Atlanta who famously won a libel case against a Holocaust denier that was turned into the 2016 film “Denial.” (IAS hosted a free screening of the movie at the end of January in advance of last week’s panel.)

Gottlieb spoke about the history of extremism and anti-Semitism in Britain, asserting that women are both the “victims and purveyors of hate.” She said the DNA of anti-Semitism includes a “double helix of hate,” which is the combination of racism and sexism. In her lengthy remarks she also spoke about the “continued interest and prominence of fascism in British society,” and wondered if that fascination is now “turning into fear and hatred.”

Finkelstein, a member of Great Britain’s Conservative party, expressed the unease of Jews in his country. He said he’s “nervous about the rise of nationalism and populism in Europe,” and that anti-Semitism from the left has had the “most immediate impact” on Jews.

However, Finkelstein said he saw a silver lining in the rise of Labour Party leader Jeremy Corbyn, who has called Hamas and Hezbollah his “friends” and has consorted with Holocaust deniers.

“Politically, it turned out to matter,” he said, because Corbyn’s behavior educated people who were previously unaware of the concept of anti-Jewish hatred. Corbyn’s rhetoric — condemning racism while condoning it among his party — “undermined his leadership,” according to Finkelstein, and people found it “not prime ministerial” to be fighting with a segment of the British population.

Topics during a question-and-answer session included the etymology of anti-Semitism, Jewish support of populist leaders, the anti-Israel Boycott, Divestment, and Sanctions movement, and whether, given the uptick in violent anti-Semitism, U.S. Jews should be packing their bags for the safety of Israel.

To that last question Lipstadt responded, “this is not 1938,” and called suggestions of Jews needing to move to Israel “short-sighted and silly.” To illustrate her point she told a story about a young student at a Jewish boarding school who ran to a police officer for help on the night of Kristallnacht, but the officer said he refused to help Jewish children. “That’s not today,” she said.

Another audience member asked about the validity of connecting anti-Semitism with anti-Zionism. Finkelstein shared a metaphor strongly connecting the two.

“When someone throws a rock at a Jew you don’t pick it up and go ‘I wonder whether that was an anti-Semitic rock or an anti-Zionist one,’” he said.

In addition to anti-Jewish hatred, Finkelstein said, anti-Zionism must be fought because the existence of the State of Israel is “an absolute necessity for the Jewish people.” (Anti-Zionism is not criticism of the policies of the Israeli government, it is a prejudice against the Jewish movement for self-determination and the right of the Jewish people to their homeland in Israel, as defined by the ADL.)

Toward the end of the program, Lipstadt warned audience members not to consider their political divide in the fight against anti-Semitism, as it comes from the right and the left. “And if you only see it on one side, then what I would conclude is that you’re really not interested in fighting anti-Semitism. You’re interested in scoring political points.”

A live stream of the presentation is available at ias.edu/ideas/anti-semitism-past-present.