Hundreds of protesters gathered in Trenton this week to demonstrate against a bill that would have prohibited religious exemptions for vaccinations. Photos by Jed Weisberger

An audible cheer rose on Monday evening, Jan. 13, in the N.J. Senate gallery in Trenton as Stephen M. Sweeney (D-Dist. 3) announced the postponement of a vote on a bill to strip religious exemption from state law mandating vaccines.

The cheers came from protesters who had been gathering for several days in the courtyard of the State House Annex, often in loud defiance of the proposed bill. Jewish individuals and groups have been among those in favor of maintaining the religious exemption, as some oppose vaccines altogether.

Although the bill passed 45-25 in the General Assembly, the Senate would have been one vote short of approval, according to media reports. The process of removing the exemption will now be restarted in both houses in the new legislative session, which began Jan. 14.

“We’re ready to go to war on this, and we will,” Sweeney, president of the State Senate, told reporters.

The New Jersey office of Agudath Israel of America, an Orthodox public advocacy group, supports vaccines but lobbied against the removal of religious exemptions. 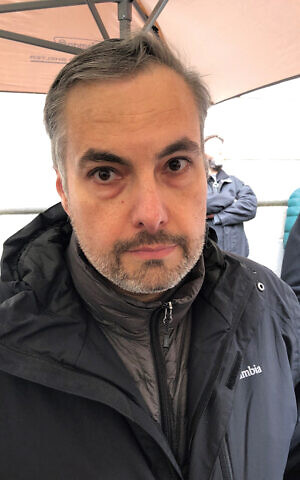 “We feel the state having any role in determining a religious exemption as far as a child being vaccinated is a slippery slope,” said Rabbi Avi Schnall, the director of the New Jersey office of Agudath Israel of America. “We will continue to lobby against that, for both us and any religious group,” adding that “The vast majority of our community’s children are vaccinated.”

During Monday’s protest, groups such as the New Jersey Coalition for Vaccination Choice led chants of “kill the bill” and “parents call the shots.”

“The bill goes against my religious rights,” said Manny Dancour, a former Orthodox rabbinical student who now owns a grocery store in Lakewood. “The reason why it goes against our religious rights as Jews is that we are not allowed to inject ourselves with something that has ingredients that put us at risk. If a person is healthy, there is no reason to inject a person with something that makes them sick.”

According to Dancour, some in his community oppose vaccines because, he said, they’re made from the cells of terminated pregnancies. “Those cells were from a human being that wasn’t buried,” he told NJJN. Viral vaccines, such as chicken pox, rubella, and hepatitis A, are produced from fetal cells grown from the elective termination of two pregnancies in Europe in the 1960s, according to Children’s Hospital of Philadelphia. “We can’t allow that with vaccines.”

Nonetheless, most religious leaders approve of these vaccinations. The Vaccine Task Force, based in Brooklyn, and comprised of Orthodox nurses who promote vaccines, wrote in an email to NJJN, “All major rabbis approve of and endorse vaccinations.” The email added, “So does the Pope!”

Jenna Giuliano, 20, of Howell came to Monday’s protest wearing a yellow star of David with “No Vax” written across it in Hebraicized English letters. 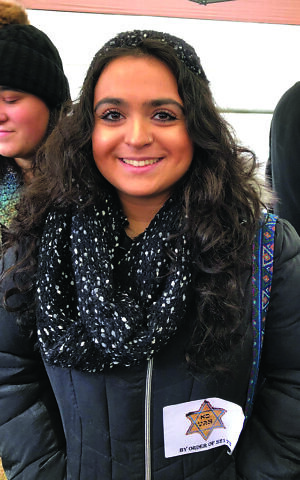 Jenna Giuliano, a Reform Jew from Howell wearing a “No Vax” yellow star, believes free choice should apply to vaccines.

“People just don’t want to hear what we have to say,” said Giuliano, who identifies as Reform and is opposed to mandatory vaccinations. “That’s not OK. Neither is it OK to try to take away our right to choose.”

There were 13,987 New Jersey students, from pre-kindergarten through sixth grade — 2.6 percent of the elementary school population — who were granted a religious exemption in the 2018-19 academic year, according to most recent figures available from the state’s Department of Health. The exemption is based on a letter received from a parent citing religious objections to the vaccines.

If religious exemptions are eventually removed, only medical exceptions, written by a physician or an advanced practice nurse, will be accepted by day cares and schools.

The failed bill also included an exemption, submitted by State Sen. Declan O’Scanlan Jr. (R-Dist. 13), that would have allowed private schools to accept non-vaccinated students if they disclosed the institution’s vaccination rate to the school community. This was promoted as a compromise, which some have protested will allow wealthy families to circumvent vaccine requirements by enrolling their children in private schools.

Officials from the four Greater MetroWest day schools confirmed to NJJN that unvaccinated students are not accepted into their schools. The schools include Golda Och Academy in West Orange, Gottesman RTW Academy in Randolph, Jewish Educational Center in Elizabeth, and Joseph Kushner Hebrew Academy/Rae Kushner Yeshiva High School in Livingston.

Sweeney said he remains determined to push ahead with the removal of religious exemptions. He told reporters, “We’ll get this done.”