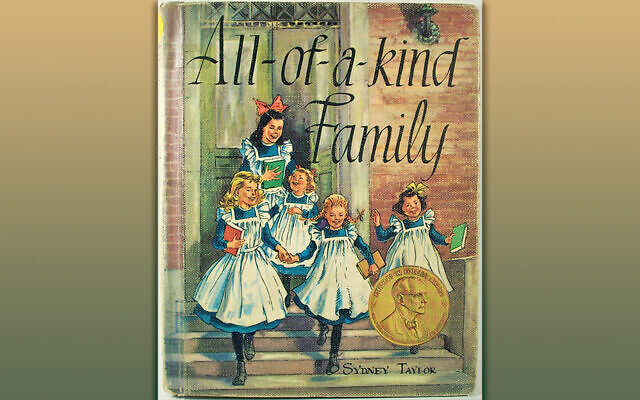 “Are you reading that book again? How about finding another book to read?”

That was my father’s almost constant refrain when we staked out and hunkered down in our respective reading areas in the living room, way back in the day. He’d sit in an upright chair near the lamp, reading glasses perched on his nose, holding his favorite newspaper. Dad had expertly folded the paper in half, the crease bent perfectly down the middle, while I curled up on the couch with my book, “All-of-a-Kind Family” by Sydney Taylor.

Dad was a pragmatic reader of newspapers, nonfiction, and Judaica. He read to learn and retrieve information, while I connected to characters and befriended them by revisiting them over and over again.

I immersed myself into the chapters of “All-of-a-Kind Family,” about the Jewish immigrant childhood at the turn of the last century, by the author Sydney Taylor, originally known as Sarah Brenner. Sarah’s family included her smart, mischievous, and sassy sisters, Ella, Henny, Charlotte, and Gertie. But the true backbone of this family was the clever, nurturing, and resilient Mama, to whom all the girls and Papa looked up. Mama was the undeniable boss of this brood.

It seemed to my childhood self this family was almost perfect, fun-loving, and joyous, and I wanted to be a part of it.

My two real-life sisters were 10 and 12 years older than I, away at college, and I missed them. So with each reading I jumped into the pages, and for a while Sarah’s family was mine as well. When Mama took the girls shopping to all the kosher vendors on the Lower East Side to prepare for Shabbat, I walked alongside them. When they sat at the Shabbat table reading by the dimming light of the candles, I was there too. The family holiday celebrations and visits to Papa in his junk shop were such fun. And finally, when baby Charlie, the first son, was born at the end of the book, it was joyous! We couldn’t understand why Papa cried when he heard the news. Ella, always the responsible eldest child, comforted him. It turned out that Papa was truly overjoyed and overcome with emotion after having five daughters.

When the book “From Sarah to Sydney” by June Cummins was released recently, I couldn’t wait to immerse myself in this family again. But some of the information Ms. Cummins’ research revealed was hard to reconcile with the images from my youth. I discovered Sarah’s family wasn’t at all perfect. There were dark and unsettling sides to this immigrant family story. It felt almost as if a member of my own family had withheld secrets that were recently revealed.

Yet at the same time it also was oddly comforting knowing that Sarah’s real childhood and family life had some warts, and was like many other imperfect families, even my own.

Interestingly, June Cummins is the only biographer to date to write about the life of the Jewish author Sydney Taylor. Like many immigrant families at the turn of the century, Sarah Brenner wanted a more American identity and wished to reinvent herself, so she changed her first name to Sydney. She left high school after two years and joined Martha Graham’s dance troupe. Sydney also taught dance and drama at Camp Cejwin in Port Jervis, N.Y., for 40 summers.

Sydney eventually married Ralph Taylor. She wrote the stories of her childhood with her big family for her daughter, Jo, who was an only child. It seems that she drew upon many of her real-life experiences, using her creativity to enhance the story. She wrote about many of the lighter and entertaining aspects of her Jewish immigrant memories. Ralph entered Sydney’s manuscript in a contest, and in 1951 she won the Charles W. Follet Award.

The Brenner family’s real immigrant experience began when Sarah Brenner’s parents, Morris and Cilly, short for Cecilia — the Mama and Papa of book — sailed in steerage from Germany to America in 1901. Jane Cummins reported that 58,000 Jews came to these shores from eastern Europe that year. Ms. Cummins also reported that Cilly had mixed feelings about leaving her home in Germany, and at first wanted to return to Germany, where she had lived a middle-class life “and was a product of the German Jewish bourgeoisie.”

Sarah Brenner was born on October 30, 1904 and grew up on New York City’s Lower East Side. Her sisters — Ella, Henny, Sarah, Charlotte, and Gertie in real life, as in the book — filled out their real all-of-a-kind family. Years later, in 1912, Irving was born; he became the book’s Charlie.

One of the darker revelations in Ms. Cummins’ book was that Cilly actually became increasingly overwhelmed and depressed with all the responsibilities that came along with her large family. This was unlike the fictional Mama, who was unflappable and unceasingly maternal.

But there also were many similarities between the real Cilly and the imagined Mama. Cummins documents that “German Jewish women were intent on inculcating in their children the habits of duty, obedience, thrift, and respect,” she wrote. Cilly was true to her background as a German Jew, and throughout the book we see elements of that in Mama.

In the chapter called Sarah in Trouble, when Sarah refuses to eat soup, Mama doesn’t relent. When Mama laid down a rule, it was followed. Even though Sarah was starving, rules were rules. There were no exceptions. “There was a strict rule about not wasting any food in Mama’s house. This rule has been made into a delightful chant by the children: ‘No soup, no meat. No meat, no vegetables. No vegetables, no fruit. No fruit, no penny.’”

Throughout the chapter we wait for Mama to soften, as mothers often do, but not this one. Instead, she used it as a teaching opportunity to reinforce time-honored lessons of thrift and duty. Reading this as a child, it was the only time I questioned Mama’s judgment. I thought she was being mean. Thankfully, my parents never forced me to eat.

Like Mama, Cilly was clever and she also was fastidious in her housekeeping and grooming. When Mama invented a game and hides buttons to motivate the girls to dust thoroughly in the book, her fun and creativity shine. The girls knew that Mama had high expectations in the maintenance of a spic and span home.

As for the five daughters, Ella, the oldest of the Brenner girls, recalled many of the difficult early experiences, as the family transformed from being fresh-off-the-boat immigrants to being established on the Lower East Side. She also remembered some of the more unsettling and darker sides to the real Brenner story. Ms. Cummins writes: “In the audiotapes Ella made with her sister Charlotte when the two women were older recalling their youth, the memories she recounts most vividly are of impoverishment.” Ella’s even darker revelations about Cilly’s true feelings about her later pregnancies were the most disconcerting. In stark contrast to the easygoing, child-loving, resilient Mama, Cilly wasn’t as happy about her later-in-life pregnancies.

Ms. Cummins also wrote that “Morris and Cilly at times suffered terrible poverty and even worse calamities. Difficult years lay ahead of them, the very years Taylor depicted as loving, charming, and relatively carefree in her children’s books. But even though Taylor omitted some of the enormous trials experienced by her parents, she was not dishonest, only intentionally selective, in her portrayal of this young family’s transition to becoming Americans.”

Another subplot to this story is about the sad events involving the author, June Cummins. As reported in the New York Times on June 22, “as she was writing ‘From Sarah to Sydney,’ Cummins was suffering from amyotrophic lateral sclerosis (Lou Gehrig’s disease) and completed the book by typing with an eye-tracking communication device.” She finished a draft of the book before her death in 2018 but did not live to see its publication.

“All of a Kind Family” made her famous, and her sequels continued to attract many devoted readers and several generations of fans. Sydney took the best parts of her childhood memories and created a delightful narrative that has found an audience with generations.

I continue to revisit it by reading and sharing Sarah’s world with my own students. It’s remains fresh and appealing, and the universal message of this loving family still resonates with children and adults.

Esther Kook of Teaneck is a learning specialist and writer.