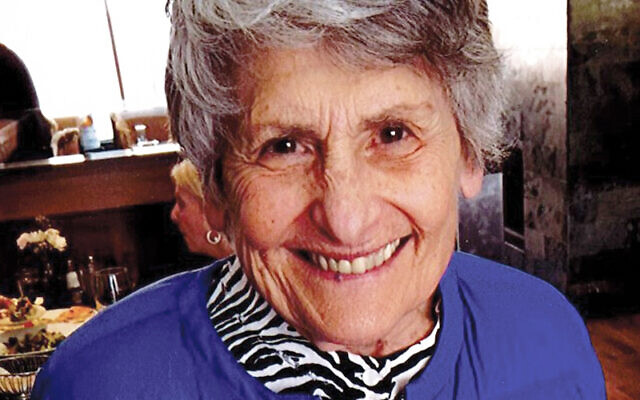 Ellen Goldner has many memories of her work with Maxine Myers, but one in particular stands out.

More than two decades ago, Myers approached Goldner, who was president of Women’s Division at what was then known as the United Jewish Federation of MetroWest.

“Maxine came to me with a large check and told me we were going to start something,” Goldner told NJJN in a telephone interview. “She was worried about domestic violence and wanted to address it. So, with her initial backing, we created the Rachel Coalition. Maxine was a founding member.”

The Rachel Coalition, a division of Jewish Family Service of MetroWest (JFS), is now a partnership of several organizations providing services and support programs for victims of domestic violence in Essex and Morris counties.

Maxine Myers of Maplewood, a champion fund-raiser for women’s causes and advocate for people with disabilities, died April 25, 2020. She was 84.

“Maxine was instrumental in making so much happen in Greater MetroWest … and around the world,” said Jewish Federation of Greater MetroWest NJ executive vice president/CEO Dov Ben-Shimon in a statement. “She was deeply devoted to the community, to Israel, and to the Jewish people. I was always grateful to see her at the many events and meetings and missions in which she served as a role model for so many of us. Her philanthropy, her generosity, and her passion for connections were all a testament to her wonderful spirit. We are deeply sorry for the loss of a true friend and an icon of the community.”

Myers was a founding member in the mid-2000s of the Jewish Women’s Foundation of NJ, which is a part of the Jewish Community Foundation, federation’s planned gifts and endowments arm.

She was on the board of Women’s Philanthropy and the Jewish Women’s Foundation at the time of her death.

In addition, Myers was a long-standing trustee of Jewish Family Service of MetroWest and led many JFS committees and significant fund-raising campaigns. In 2007 she was honored for her outstanding work and commitment to the social service agency.

Despite all her volunteer work and communal accomplishments, her oldest son Mark Myers, a sixth-grade teacher in Arlington, Mass., said his mother was not one to flaunt the praise she received. “My mother was extremely modest,” he told NJJN in a telephone interview. “I never fully appreciated all she did until I was a little older.”

Goldner, the first woman president of federation in 2002 and current president of Jewish Service for the Developmentally Disabled (JSDD), worked with Myers in Women’s Philanthropy and numerous other federation projects.

“We took a lot of trips to a lot of places,” said Goldner. “It meant a lot to Maxine to see and meet people all over the world. She was always looking to help and will be greatly missed.”

Myers was particularly devoted to helping people such as immigrant youth and organizations advocating for those with visual disabilities like New Jersey Council of the Blind. In the 1980s she adopted Van Nguyen, a teenage girl from Vietnam.

Myers, a member of Temple Sholom of West Essex in Cedar Grove, also was a passionate bridge player. She loved to read, do crossword puzzles, and go to the theater, concerts, and movies.

Myers was born in 1935 to Carl and Eleanor Leff. She was raised in Manhattan.

She married George Myers, a biomedical engineer, during her junior year at Sarah Lawrence College. The couple settled in Maplewood and divorced 30 years later.

Burial took place April 28 in Israel with arrangements by Bernheim-Apter-Kreitzman Suburban Funeral Chapel, Livingston. A memorial service will be held at a later date. Memorial contributions may be made to Cerebral Palsy of North Jersey at cpnj.org.