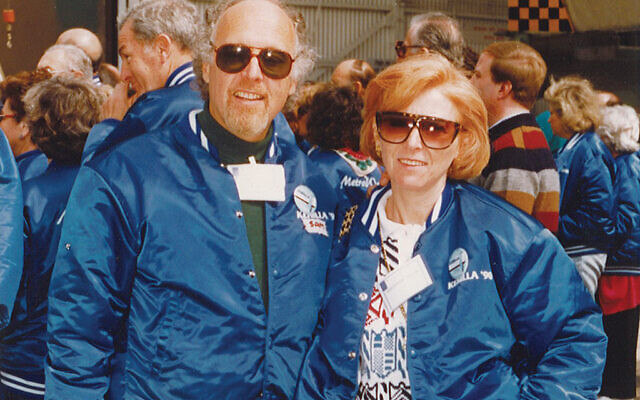 Sam and Marjorie Oolie, during the MetroWest federation’s Kehilla II mission to Israel in 1991, which they cochaired. Photo courtesy Jewish Federation of Greater MetroWest NJ

Sam Oolie of Fort Lee, who passed away Jan. 16, 2020, touched many lives through his service to the Jewish Federation of Greater MetroWest NJ community. He served as president of the federation — then called United Jewish Federation of MetroWest — from 1987 to 1990 and was a major supporter of Israel, an advocate of Jewish emigres from the Soviet Union, and a booster of efforts to ease their absorption into Israel. He was 83.

Oolie, who previously resided in Caldwell, Livingston, and Saddle Brook, was instrumental in raising much-needed funds to support both the federation he headed and to help former Soviet citizens rebuild their lives in Israel during that period and beyond.

He was one of the earliest members of the federation’s Jewish Community Foundation’s Lester Society, established in 1993 to recognize those who provide major endowments through support of the UJA Annual Campaign.

According to federation leaders at the time, Oolie was the person the community knew it could count on.

“I can say Sam was a visionary,” said Howard Charish, who, as MetroWest
federation executive vice president (1982-2000), worked with Oolie on many projects and developed a friendship with him. “He brought people together and made us all feel a part of the success we had.”

Charish remembers a particularly enjoyable affair sometime in the late ’80s at the Mall at Short Hills, which was a favorite venue for federation fund-raisers of that era. That day, said Charish, “after the mall closed, we had tables set up, the meal was brought out, and the late Marvin Hamlisch was the entertainment. Not only was it an affair for raising money we needed — it was fun. That was Sam’s strategy of raising money; he wanted to make it fun, and he always did.”

“As UJA Campaign chair, Sam was a prodigious fund-raiser whose motto was: Campaigning can be fun,” wrote Kleinman in an email. “He was one of the ‘architects’ of the Aidekman Jewish Community Campus in Whippany, which was built in 1992 to house the federation and other Jewish organizations. He was one of a kind and will surely be missed.”

Oolie graduated from the Massachusetts Institute of Technology in 1958, then served six months as a second lieutenant in the United States Army. After military service, he enrolled at Harvard Business School, graduating in 1961. His first job was with a small company call Drinx Plus. Oolie and his partner, the late Leonard Vorcheimer, acquired the company, changing its name to Food Concepts and transforming it from a vending machine company to a firm that provided cafeteria services to offices, hospitals, and other places.

In 1985, Food Concepts was sold; Oolie, said family members, wanted to focus his time on philanthropic endeavors and other business interests. He later served on the boards of several public companies, including NCT Group, Comverse Technologies, and Avesis. In 1999 he invested in NoFire Technologies, a manufacturer of fire-retardant paint, serving as its chair and chief operating officer until stepping down last year.

Oolie and his wife, Marjorie, who were married for 58 years, worked together on projects to benefit Israel and its people. They were key leaders in the MetroWest federation’s Project Renewal, which focused on providing aid to Ramat Eliyahu, a disadvantaged neighborhood in the federation’s Israeli partner community of Rishon Lezion. The matnas (community center) there — offering athletic, educational, and cultural programs to youth and others in need — was recently dedicated as The Oolie Community Center. Thanks to the Oolies’ support, a day-care center for infants was recently constructed on the campus.

The couple also cochaired Kehilla II, a large community mission to Israel in 1991. Charish said Sam Oolie injected everything he did for the federation with incredible energy, particularly when he was the UJA Annual Campaign chair.

His wife emphasized her husband’s devotion to family. “Even though Sam was often busy with his work in Jewish, Israeli, and business circles, he always found time for his family. He would always let us now where he would be and when he would be home,” said Marjorie Oolie. “There were many trips to Israel, some of which I certainly enjoyed being part of.”

Oolie also found the time to write a book; “Good Guys Finish……?” (Page Publishing, 2018) focuses on executive greed and corporate deceitfulness and how they victimize the little guy.

A funeral with arrangements by J.L. Apter Memorial Chapel was held Jan. 20 at the Cedar Park Cemetery in Paramus; the service was conducted by Rabbi Norman R. Patz, rabbi emeritus of Temple Sholom in West Essex.

In addition to his wife, Marjorie, Oolie is survived by three daughters, Janis (Robert Ostrager), Caroline, and Tara; and five grandchildren.