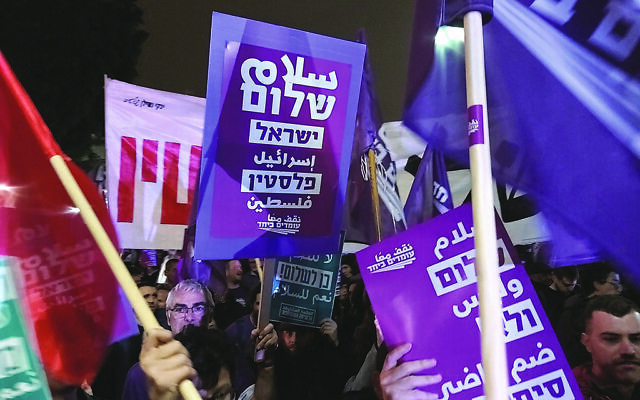 Likening the moment to President Harry Truman’s recognition of Israel in 1948, Netanyahu praised the peace plan as a “historic recognition” of Israeli sovereignty over portions of the West Bank both vital to its security and central to Jewish heritage.

The excitement wasn’t limited to the Israeli right. A day before, Blue and White party leader Benny Gantz, Netanyahu’s challenger in the March 2 election, said the plan is a “significant and historic milestone” and vowed to work to implement it if he were to be elected. Yair Lapid, Gantz’s No. 2, called it “excellent for Israel.”

The Israeli enthusiasm reflected U.S. support for an agreement in which Israel would get sovereignty over all of the settlements in the West Bank — as well as the strategic Jordan Valley — and keep control of an undivided Jerusalem.

But that endorsement did not extend to the length of the Israeli political spectrum. Israeli Arabs, Jewish peace activists, and settler ideologues have all come out with harsh criticism for Trump’s plan — each group for its own reasons.

The right fears a Palestinian state

Settlers oppose the proposal to establish a Palestinian state — saying the Trump plan breathed new life into the two-state solution, which they have long derided.

The plan “should be thrown in the garbage.… Trump was able to fool Netanyahu,” said David Elhayani, chairman of the Yesha Council, the umbrella organization of settlements, in an interview with right-wing newspaper Makor Rishon. “The [Israeli] right will not have a hand in this and neither will the Arabs.”

At first, the U.S. plan seemed to be the realization of Yesha’s half-century campaign to reclaim biblical Judea and Samaria for Israel. Netanyahu had even promised to follow up the unveiling of the plan with a government decision to annex portions of settlements.

But the shine began to come off the plan when Netanyahu showed it to Elhayani and settler leaders who had joined him in Washington for the roll out. The “Deal of the Century” envisioned a Palestinian state on 70 percent of the West Bank, which settlers consider an existential threat and a religious abomination amid the biblical Land of Israel.

Under the Trump plan, a handful of settlements that are home to about 3 percent of the Israeli population in the West Bank would remain Israeli enclaves within that Palestinian state. And even before the Palestinians met all of Israeli conditions for statehood, those settlements would have to observe a four-year building freeze similar to the one that the Obama administration enforced on the settlements as a goodwill gesture.

“We really hope that won’t happen. We are preparing a new neighborhood of 120 homes,” said Eli Rosenbaum, 45, a 15-year resident of Ateret, a settlement designated as an Israeli enclave in the “conceptual map” released as part of the Trump plan. “It’s an injustice. This is private land that we purchased legally. A freeze doesn’t serve anyone. Why is there no freeze for Arabs? We are totally against that.”

As for the prospect that Ateret might become a tiny Israeli island in the middle of a Palestinian state, Rosenbaum said that he and other residents aren’t worried because few of them expect a Palestinian state to ever become a reality — given the conditions outlined in the plan.

The upside of the plan, said residents of the settlements, is the recognition of the Jewish connection to Judea and Samaria, the biblical regions of the present-day occupied West Bank — and the tacit green light for annexation.

“It was very moving that President Trump recognizes the Jewish people’s right to live in the Land of Israel. On the other hand, it’s a problem,” said Sara Gelbard, a 23-year resident of the settlement of Elon Moreh, a potential Trump-plan Israeli enclave located near Nablus. “Trump is still talking about giving away land to the Arabs. I can’t accept any plan that at its core establishes a Palestinian state.”

Ezri Tubi, a resident of Yitzhar, a prospective enclave in the same region as Elon Moreh, explained that what seemed to be a big step forward ultimately proved to be a step backward because it promotes a two-state solution. The notion that Yitzhar residents should live as an island in a Palestinian state, he said, is “preposterous. People would never agree to live in this reality. It means suffocating them.”

On the other side of the political spectrum, Jewish peace activists and Arab Israelis were assailing the plan for proposing to transfer Arab towns near the Green Line — the so-called “Triangle” region northeast of Tel Aviv — to Palestinian control in return for annexed settlements. Including the cities of Umm el Fahm, Baka al Gharbiyeh, and Kafr Qassem, the combined population of these towns mentioned in the plan is about 300,000, or about one fifth of Israel’s Arab population.

The proposed transfer drew thousands of Israelis into the streets of Baka al Gharbiyeh last Saturday afternoon and into the center of Tel Aviv on Saturday night. Groups of Israeli Arabs stood at highway junctions outside of their towns with signs reading, “No to the plan of the century.”

Ignoring the objections of the settlers, Knesset member Aida Touma-Suleiman of the Arab Joint List Party insisted that the Trump plan was in fact written according to settler specifications.

Amid signs in Tel Aviv declaring “Don’t make apartheid great again,” she directed her message to Jews in the political center and to politicians from parties that rushed to endorse the plan. “Supporting the plan means you are supporting annexation and transfer. Don’t fool yourselves. You don’t fool us.”

She added that the plan threatens Palestinian citizens of Israel, and is a direct result of Israel’s controversial “nation-state law,” which elevates the country’s Jewish character above its democracy.

“We will not give up on our homeland, nor the link between the Galilee, the Triangle, and the Negev,” she said, referring to the other Israeli regions with major Arab populations. “We won’t concede our rights as part of the Palestinian people, and we won’t allow ourselves to be equated with the settlers. We are offspring of this place. We haven’t stolen lands, or squatted on the lands of others.”

Even before the demonstrations, there were signs that politicians in the Israeli center realized the problematic nature of the transfer proposal — an idea first floated some 15 years ago by Avigdor Lieberman of the right-wing Yisrael Beiteinu party.

The idea of swapping Israeli Arab towns in the Triangle area in return for annexed settlements in the West Bank is “obscene,” Blue and White’s Ofer Shelach told Army Radio on Sunday. “This should not be discussed, and when Blue and White comes to power, this clause will be dropped.” Blue and White wants to push for Knesset endorsement of the Trump peace plan, except for the transfer clause, he said.

On the sidelines of the Tel Aviv demonstration, Yair Oppenheimer, a former head of Peace Now, said that while the two-state idea features prominently in the Trump plan, the substance is more problematic. By paving a path to a unilateral annexation by Israel, the Trump plan is liable to cause the collapse of the Palestinian Authority and undermine peace with Jordan.

“There will be no peace with annexation,” Oppenheimer said. “It might actually be a lethal blow to the two-state solution.”