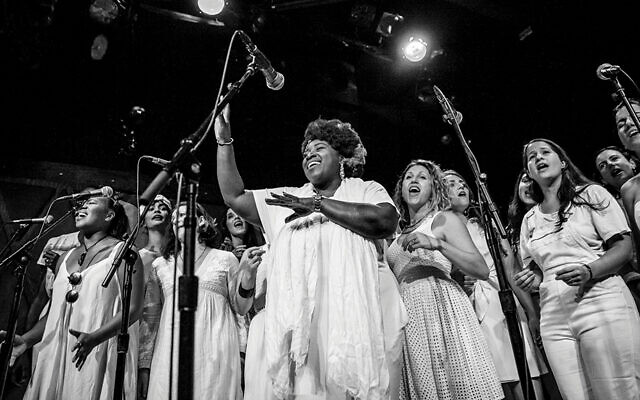 The Resistance Revival Chorus will be at SOPAC; after the show, two cantors from South Orange, Rebecca Moses and Eliana Kissner, will join a panel discussion.

When the South Orange Performing Arts Center welcomes the Resistance Revival Chorus on March 10, the center will be offering the community a rare opportunity, SOPAC’s executive director, Dee Billia, said.

The chorus — a collective of “60 womxn [sic] and non-binary singers” founded after the 2017 Women’s March — will offer “songs of protest and joy,” Ms. Billia said. Before the performance, a panel of community leaders, including two local cantors, will discuss the role of music in activism.

According to its website, the Resistance Revival Chorus is driven by the idea that “joy is an act of resistance,” a sentiment attributed to the poet Toi Derricotte. Its goal is to “uplift and center womxn’s voices to raise awareness of the continuing need to advance social justice.”

Bringing the chorus to South Orange is “something we want to do,” Ms. Billia said, noting that exposing the community to something it might not otherwise encounter is part of her job. “That is what we should all do as nonprofits,” she said. “We can’t do it all the time, but we can present [such events] once in a while when a great opportunity arises.”

She expects that her community will appreciate the event. “There’s a strong activist base in South Orange and Maplewood,” she said. Showcasing the chorus “is a good way to start a discussion.” People who attend “should come to be inspired by the music and the message and to understand how artists can come together to promote their own views on equality in a loving and joyous way.”

Checking out the band on YouTube and through videos, “I was impressed with their make-up,” she said. “They’re really diverse. It’s not a community chorus,” she added, noting that they are paid for their performances. “They embrace the totality of nonbinary people as well, gay, trans, LGBTQ.” While the band has different geographic cohorts, the March 10 performers are New York-based, including many with professional and Broadway experience. “The sound is great,” Ms. Billia said. “They’re powerful singers.”

Their message is powerful as well, as they call for justice and equity for women across racial, ethnic, economic, sexual identity, and religious lines. Their songs declare that all social justice issues overlap heavily with women’s issues, and their goal is to harness the collective power of women to help change the world.

Their songs “connect to the message of women’s power and the status of women in activism, how they have been a driving force and have connected arts to that message,” Ms. Billia said. “It’s easier to connect with a song and music than to someone yelling at you.” A musical message is “powerful, reinforced, remembered, and felt,” she said, citing historical spiritual songs and songs of resistance. “When you march, you sing. It’s integrated into the whole movement of protest activism and social justice.” In the words of Harry Belafonte, “When the movement is strong, the music is strong.”

The panel discussion will draw on people from the local community “invested in arts and music, who have a history with social justice.” The two cantors, Rebecca Moses of Temple Sharey Tefilo-Israel in South Orange and Eliana Kissner of the town’s Oheb Shalom, come “from shuls with a strong focus on social justice.” Janeece Freeman Clark, founder of Vanguard Theatre Company, a Montclair-based regional theater which develops musicals told from the perspective of underrepresented voices, and Jessica James, president of the social action group SOMA Action, also are on the panel.

The moderator of the panel is the president and CEO of Symphony Hall in Newark, Taneshia Nash Laird.”

“Music is an integral part of activism,” Ms. Billia said. “You find messages in songs” that aren’t conveyed in any other way. “Artists often have a clearer lens on issues of the day. They crystallize it through music and lyrics, laying the focus on stuff we ordinary mortals” might not see. “It can make a movement take life; it can fascinate people.

“This is what our community needs,” she said, rather than hearing only from tribute bands. “It’s so much more than that.”

Cantor Moses said that “music and activism go hand in hand. Activism is about being part of the community, using your voice to effect change.” A singer also uses her voice to move people “to feel things and then to use those feelings.

“Throughout history, music has united people,” she continued, though “it defies our ability to describe” exactly why or how that happens. “It’s an emotional response. It can use words, but it doesn’t need them. It goes directly to our hearts. It’s not just an intellectual experience. It taps into nostalgia, memories, every piece of us.”

She added that attending the event is “an opportunity to support vocal live performances. It’s special being together for things like that.”

Cantor Kissner said part of what attracts her toward activism is that “music is able to reach parts of us that words can’t always reach. When it comes to coalition-building and building bridges between people who may have contentious relationships, music has the power to bring us into different spaces and expand our perceptions of who is sitting across the table from us.”

Cantor Kissner talked about the interfaith work she did at the Pacifica Institute in California, where she and a Muslim musician sang and played music for people fasting on Ramadan. “It felt like an act of service to sing to those fasting,” she said. “It was a meaningful way to give and to build bridges.” Musical selections included Turkish-Jewish pieces as well as Ladino songs.

Cantor Kissner noted that at her synagogue’s upcoming Ohab 160 concert, the youth choir will perform “We Rise” by Batya Levine, “a queer Jewish composer in Philadelphia,” who wrote it at ‘Let My People Sing’ right after the 2016 elections, about the same time the resistance chorus was formed. She chose this song “because it’s beautiful music, and I thought it would be inspiring and empowering,” she said. “It’s got an activist message.” The piece is especially powerful, she said, “because its message is so universal but feels personal at the same time. That’s a key marker of an effective song that moves us.”

For more information about the South Orange Arts Center, go to SOPACnow.org.

Who: The Resistance Revival Chorus

What: will perform after a panel discussion