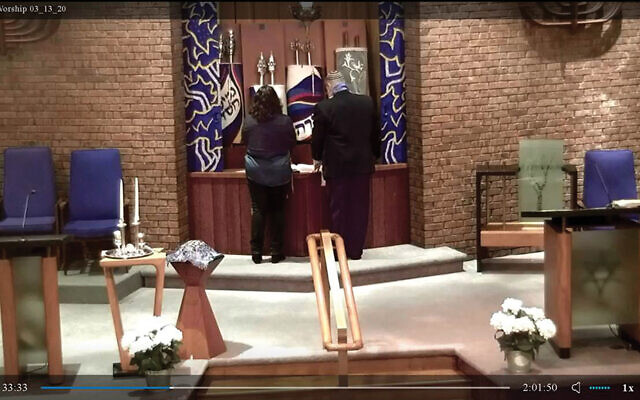 Monmouth Reform Temple in Tinton Falls is among the numerous congregations livestreaming services.

During the “V’shamru” prayer at Kabbalat Shabbat services of Congregation Beth Hatikvah in Summit (courtesy of Zoom, of course), a 5-year-old danced on her bed with a teddy bear and a doll. As congregants lit candles and sang blessings, a cat draped itself over the shoulders of one member, and pets wandered in and out of view.

“I had feared that a service online would not be the same,” said Rabbi Hannah Orden of Beth Hatikvah. She was right. Instead, it was “wonderful in a completely different way,” she said.

“Zoom turned out to be a tool for inclusion — we had people with disabilities, people who have moved out of state, people with young children,” said Orden. “I was even able to include my daughter who lives in the Boston area.”

Buzzwords for synagogues shuttered by the Covid-19 pandemic are Zoom, Facebook Live, and livestreaming. With synagogue buildings closed for the foreseeable future, congregations are finding creative ways to meet the needs of their members and members are responding in volume. (A list of virtual services from local synagogues is available at jewishheartnj.org.)

One week Friday night services on Facebook Live for Temple B’nai Or in Morristown reached 2,237 people, according to the Facebook analysis, said an astounded Rabbi Michael Satz. “I think people are craving some kind of connection,” he told NJJN.

Rabbis Jesse Olitzky and Rachel Marder wrote about the power of prayer in an email to members of Congregation Beth El in South Orange. “There is power in connecting to something larger than ourselves — at times of joy and celebration, and especially at times of uncertainty,” they wrote.

Some spiritual leaders are facing quandaries when technology conflicts with halacha. For example, Orthodox congregations can’t livestream Shabbat services because of religious prohibitions on using computers and cell phones. Some congregations are grappling with the question of whether 10 people praying “together” virtually counts as a minyan.

Rabbi Eli Garfinkel of Temple Beth El, a Conservative synagogue in Somerset, recently sent an email to his congregation stating, “I have received temporary guidance to hold minyanim on weekdays and Shabbat via Zoom. This permission is given because of exigent circumstances. Once the pandemic is over, we will go back to requiring physical presence.”

Five days later she appeared confident. Her dvar Torah delivered before Shabbat was filmed from a podium with quality sound and visual aids: two braided challot soon ready to bake. Her words were dramatic and powerful belying the havoc coronavirus is wreaking.

Synagogues with streaming and technology in place before the pandemic are taking the opportunity to try new things. At Temple B’nai Abraham in Livingston, Rabbi David Vaisberg told NJJN he is excited to offer Havdalah services Saturday evenings and healing services over Facebook Live. He will also invite congregants for Zoom “hangout time” leading into Shabbat.

And plenty of congregations are offering adult education and Torah study throughout the week, often open to the entire community. (NJJN will share online events in the revised Agenda. See page 21 for more information.)

But Zoom and similar technologies are just a single tool, not a silver bullet for a time of rising anxiety.

“Pastoral care is going to be more complicated,” said Satz of B’nai Or in Morristown, who is calling members that he knows of who are vulnerable and isolated, and he is reaching out to make sure anyone else who needs a call receives one.

It’s a practice Rabbi Marc Katz of Temple Ner Tamid in Bloomfield has also taken on, sharing the load with volunteers to call the entire congregation to ask three questions: Do you need supplies? Do you feel isolated? Are you in need of pastoral care?

“So far, everyone is OK,” he said, but he’s not so sure that will be the case when they make a second round of calls.

Rabbi Mendel Solomon of Ahavath Torah-Chabad at Short Hills pointed out that everyone has all kinds of worries that are shifting in uncertainty, from children studying in other countries trying to get home, to elderly parents they worry will suffer alone in isolation. His own mother, who has dementia, lives in London. He and his siblings, across many countries, are trying to sort out how to make sure she isn’t alone and they are worrying about what to do if she gets sick. “So many people are so nervous,” he said. “This is the new reality.”

Closing the synagogue building mid-March did not bring him a respite. “The last four days have been my busiest in years,” he said two weeks ago. “People just want to know that the shul is there. They want to hear a soothing word, a comforting thought, say a prayer.”

Instead of posting his weekly blog entry, Solomon’s offering a video filmed outside the shul every Friday so people can feel like they are still coming to the building, and he’s offering interactive prayers they can say together before the start of Shabbat. He has also created a WhatsApp group to share inspirational messages, both Jewish and secular, and he’s not above sharing funny memes.

“People crack up and it lightens the load,” he said. He added that for functioning families, forced togetherness can result in positive time together when they can have philosophical conversations, play games, and other bonding experiences.

Overall, rabbis are focused on maintaining connections with their congregants and figuring out how to be there in their times of need.

As Rabbi Dan Cohen of Temple Sharey Tefilo-Israel in South Orange said, “We need connection more than ever right now.”