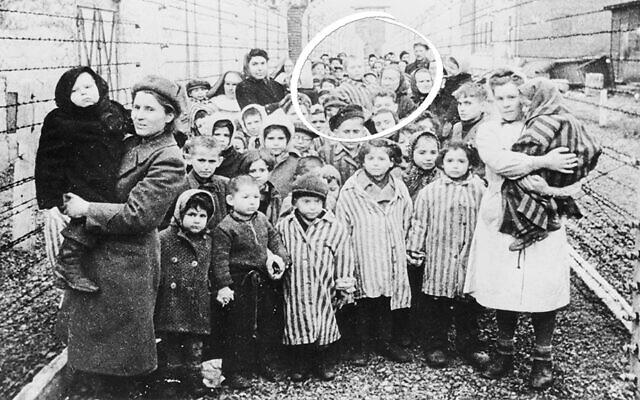 Michael Bornstein of North Caldwell, at 83, is one of the youngest living Holocaust survivors.

Mr. Bornstein had not yet been born in October of 1939, when the Nazis arrived in his hometown, Zarki, Poland; that was a month after they invaded Poland at the start of World War II. He was born on May 2, 1940, in the Zarki ghetto; in effect, the whole town had been turned into a ghetto, he said.

Dr. Bornstein, his mother, Sophie Bornstein, and his grandmother, Dora Bornstein, came to this country as displaced persons; HIAS, the Hebrew Immigrant Aid Society, settled the small family on Delancey Street, on Manhattan’s Lower East Side. He was sick when he got here, family lore says. It was a difficult beginning to a new life. But he grew up, went to school at Fordham University, got married to Judy Cohan, had a successful career in biochemicals, and raised four children. He now has 12 grandchildren, who range in age from 4 to 22.

For years, Dr. Bornstein did not want to talk about his experiences during the Holocaust. He didn’t want to talk about how his family remained hidden for most of the way, until the time, close to the war’s end, when they were shipped to Auschwitz-Birkenau by cattle car. Though he, his mother, and his grandmother somehow survived, his father and his older brother did not. 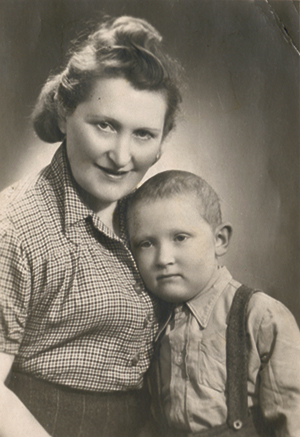 Michael Bornstein and his grandmother, Dora.

Dr. Bornstein did not want to talk about even what he did remember, which was spotty. And he didn’t want to do any research to see if he could fill in the blanks in his memory, though his four children—Lori of North Caldwell, Lisa of Glen Ridge, Debbie of North Caldwell, and Scott, of Muttontown, on Long Island—were curious.

He certainly wouldn’t talk about that inked number on his arm. “I tried to hide the tattoo as much as I could,” Dr. Bornstein said.

That was because he was one of the lucky ones, at least relatively. He had survived. He was leading a full and rewarding life with Judy; he worked first as a scientist researcher at Dow Chemical and Eli Lilly in Indianapolis and then moved to biotech work at Johnson & Johnson in New Jersey. Dr. Bornstein holds a Ph.D. in pharmaceutics and analytical chemistry from the University of Iowa and was part of teams that developed life-saving antibiotics, growth hormones, and cancer treatments.

As his daughter Debbie — more fully, Debbie Bornstein Holinstat — tells the story, a decade ago, the eldest of Dr. Bornstein’s 12 grandchildren, Lori’s son Jake Wolf, decided to do a project about his grandfather and the Holocaust for his bar mitzvah. “He wanted to teach his peers about the Holocaust and he asked his ‘Papa’ to speak,” Ms. Holinstat said. “As my father says, he never says no to his grandchildren.” 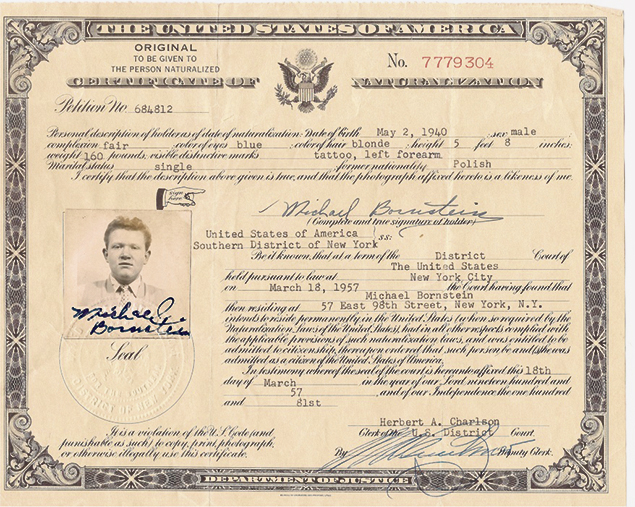 This is Dr. Bornstein’s naturalization certification; he became an American citizen in 1957.

For years, though, he did say no to his daughter. Ms. Holinstat is a writer and video producer; she worked for MSNBC for two decades and now is at Peacock, NBC’s video streaming service. From time to time, she would ask her father if they could do some research into his young life, maybe even write a book about it.

“There were a lot of gaps in his history because he was so young,” Ms. Holinstat said. But the family did have a picture of him taken in the days after the Soviets liberated Auschwitz. In it a 4-year-old Dr. Bornstein is one of a group of children dressed in motley clothing, including the infamous striped shirts and trousers. The picture was snapped by a Russian photographer.

Dr. Bornstein was still considering whether to consent to his daughter’s request to write a book when they did some Google searches, using that liberation photograph and keywords children, liberation, and Auschwitz. One of the sites for which Google served them a link was a Holocaust denial portal.  It displayed the picture of the young Dr. Bornstein, and the caption below the photo said that it proved that the Nazis didn’t kill children when they arrived at Auschwitz. The denial website noted how very healthy the children in the photo looked.

That website was it for Dr. Bornstein. “It was time to write the book,” he said. If there were people out there saying that the Holocaust wasn’t so bad, he had to speak louder than they did. “He couldn’t let this information about the past stand,” Ms. Holinstat said. 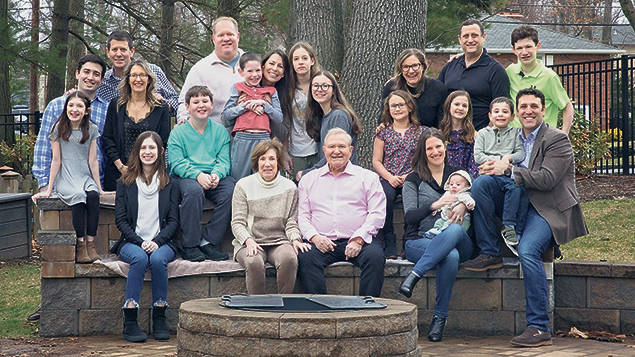 The whole Bornstein family gathers around Michael and Judy, front and center, to celebrate life in New York in 2015. (Courtesy Russell Starr)

The book, “The Survivor’s Club: The True Story of a Very Young Prisoner of Auschwitz,”” was published in 2017, and it hit the New York Times best seller list.

At the commemoration, Dr. Bornstein will talk a little about his story, but he will also talk about the need for the remaining survivors to come forward. He also wants the second generation of survivors, his children’s generation, to come forward. He wants people to learn about Holocaust deniers, and also to know what happens when bigotry and intolerance go unchecked. It’s important to him that memory not be erased.

“We worry at this stage that there are so few survivors left and the stories are beginning to fade from memory,” Ms. Holinstat said. She quoted from a study that the Claims Conference on Jewish Material Claims Against Germany did in 2020. It found that 45% of Americans cannot name a single concentration camp or World War II ghetto. She worries about what will happen when there are no longer any survivors left who can roll up their sleeves and show their tattoos.

That’s why, Dr. Bornstein said, “I’m very happy I decided to speak up.”