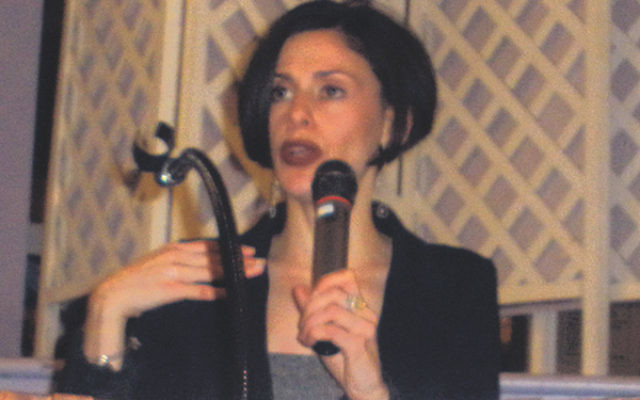 Fraidy Reiss, founder Unchained at Last, said hundreds of friends and family members “completely cut me off” after she left her husband.

During the first week of her arranged marriage, then 19-year-old Fraidy Reiss knew she was in trouble when her husband, angry because he overslept, punched a hole in the wall and threatened to kill her.

Yet, she said, in her haredi Orthodox community in Lakewood, leaving him was unthinkable, no matter how bad the abuse.

His uncontrolled anger resulted in all kinds of destructive acts. “Every piece of furniture in the house was broken,” Reiss said. “He broke plates. He would drive 200 miles per hour and slam on the brakes.”

So although she stayed with him and had two daughters, she was secretly planning her escape from a life that she saw as the inevitable result of a society in which women were denied education and rights.

Reiss finally got a divorce six years ago after secretly saving money, enrolling in college at age 27, and graduating at age 32.

She managed to attend Rutgers University, graduating as class valedictorian, and launch a career as an investigative reporter and now as a private investigator. Three years ago she founded Unchained at Last, an organization whose aim is to help not only haredi women trapped in arranged marriages, but women of other cultures with no way out.

On Jan. 21, Reiss spoke to the sisterhood of Temple Emanu-El in Edison about the plight of hundreds of thousands of women, some teenagers, in arranged or forced marriages in the United States who are unable to leave because of threats of death, beatings, or, as in her case, being shunned by their communities and families.

“Both my parents are alive, as far as I know,” she said. “Hundreds of aunts, uncles, cousins, siblings, and friends completely cut me off.”

In fact, Reiss heard years ago that her parents planned to sit shiva for her as if she were dead. Shortly after she left, she tried to reach out to them, but was told they weren’t interested.

Reiss, who owns a house in Union County, but asked NJJN not to give the town for safety concerns, said her husband — just 22 at the time of the marriage — was so possessive he used to go through her purse and pockets for anything he could discover about her life.

With no family support, she concocted a plan of exit by slowly stashing money in a box of cereal, a place her husband never thought to look. At the same time, she researched colleges on-line.

“I have no idea why Rutgers accepted me,” said Reiss, who hadn’t taken the SATs and whose high school transcript was in Hebrew. Furthermore, she had failed her Brooklyn girls’ Jewish high school’s “core” subjects, cooking and sewing.

Meeting others at college changed Reiss in ways that shocked her traditional community. Within a year she had given up covering her hair as required of married women.

Reiss’s perfect 4.0 average earned her scholarships and after graduation she landed a job at the Asbury Park Press. With a means of supporting herself, Reiss filed for divorce in civil court, deciding to skip the beit din, or religious court, and not seek a get, or religious divorce, which can be granted only with the husband’s consent. Raised hasidic in Brooklyn, Reiss’s own mother was an aguna, or chained woman, after her husband left her and refused to give her a get.

In her own case, Reiss said, “I refused to even ask for a get; it was so misogynistic.”

For women in such marriages from other cultures, leaving may be even more difficult.

In some cases, American-born women are sent to their family’s ancestral homeland and forced — “many times at gunpoint” — to marry, bringing the new husband back to America. The wives’ only value, said Reiss, is their American citizenship.

Some girls are brought to the United States, often illegally, and forced into marriages in which they are little more than slaves.

“I get calls all the time, from right around where you live, asking, ‘Please help me. I married at 15 and am now 21 and I haven’t been allowed to leave the house,’” said Reiss. “They can’t call the police because they’re not here legally, and they can’t go home because where they come from divorce is unacceptable.”

In its three years, the nonprofit organization, staffed mostly by volunteers, has helped 90 women — Orthodox Jews, Muslims, Mormons, Sikhs, and members of other communities — escape to new lives by providing legal and social services, mentoring, and promoting awareness and advocacy. The first piece of legislation authored by Unchained at Last became law in New Jersey Nov. 1; it provides victims of domestic violence and other crimes with their police reports and temporary restraining orders at no charge.

“When I went to get my final restraining order against my husband, I had to go before a judge and prove a pattern of violence, and like most women, I showed all the accumulated police reports,” said Reiss. “I was horrified to find I had to pay a fee that all crime victims have to pay to get their own police reports.”

Reiss said her daughters, now 19 and 15, attended public school and the oldest is now studying filmmaking in New York. Per a court order, they see their father twice a week for two hours. On one recent visit he surprised them by acknowledging his poor treatment of their mother and them and apologizing for his past behavior.