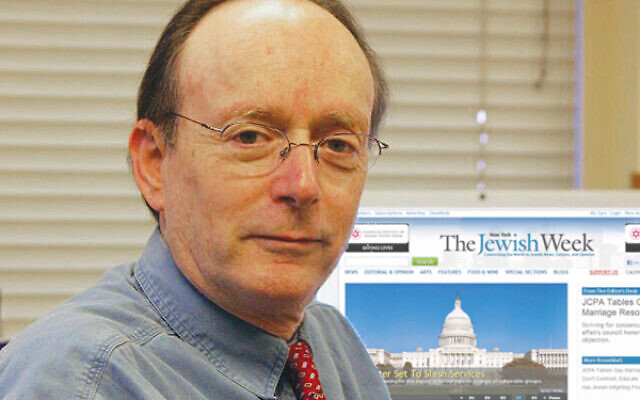 Gary Rosenblatt, former editor-in-chief and publisher of The New York Jewish Week, NJJN’s sister publication, stepped down at the end of September.

Several months ago I drafted a column about “Shtisel,” Israel’s breakout hit, noting that Netflix uses the word “doldrums” in its description of the show. In making the point that it’s odd to promote a program by using a word that pretty much means “blah,” I wrote “Go through the movie posters for all 26 James Bond films, and I’d wager none of the taglines use ‘doldrums,’” then added, in mocking reference to the consensus worst Bond flick, “(fine, maybe ‘A View to a Kill’).”

As is my usual practice, I sent my finished draft for review to Gary Rosenblatt, former editor-in-chief and publisher of The New York Jewish Week, NJJN’s sister publication. He returned the column to me largely unchanged from the original, but the line about “A View to a Kill” was notably absent in the revision.

“I think it’s funny, Gabe, and you can leave it in if you want,” he told me when I passive-aggressively protested, “but I guarantee you that 90 percent of the readers won’t get it.”

“Challenge accepted,” I thought, and then showed my draft to NJJN managing editor Shira Vickar-Fox, watching her face as she read, expecting to see it break out in a grin. It didn’t. Dejected, I took the joke out, docked Shira a vacation day (didja get that joke?), and reluctantly told Gary he was right.

I shouldn’t have been surprised, as one of the hallmarks of Gary’s stellar career is that his judgment is second to none. In his 26 years at The Jewish Week, he has known when to take on institutional corruption and sexual abuse in the Jewish community, when to voice an unpopular view, and when to step back and offer a fresh perspective on a controversial subject. And of course, when to unleash his dry, velvety sense of humor, and when to play it straight.

Gary stepped down at the end of September but, thankfully, he will be staying on in a new role, editor-at-large, so we’ll be able to enjoy his columns on a semi-regular basis and he’ll maintain a connection to the paper.

Which is really a ridiculous thing to say. Anyone even tangentially aware of NJJN’s mothership knows that neither retirement, a title change, the passage of time, nor an act of God could sever Gary’s connection to The Jewish Week. Because in so many ways he is The Jewish Week.

When Gary arrived for his second stint with the newspaper — he was previously an assistant editor between 1972 and 1974 before becoming editor of the Baltimore Jewish Times where he remained until 1993 — The Jewish Week bore little resemblance to what it is today, the gold standard in Jewish journalism. That changed under Gary’s watch, reaching a crescendo with his ground-breaking story in 2000 on an Orthodox rabbi who had sexually abused teens for upward of three decades — and those who enabled the charismatic rabbis’ illicit behavior by sweeping it under the rug.

He wasn’t universally lauded for his courage. Far from it. Hundreds of readers were incensed that he would air our dirty laundry in public and demanded he be fired. The Jewish Week refused to comply, a not-insignificant stand for a small niche publication, and over time, I believe, even most of those who were initially upset with Gary’s decision to talk out of school came to realize his righteousness. As Columbia University Graduate School of Journalism professor Samuel G. Freedman, another of my media heroes, wrote in “Letters to a young journalist,” Gary said “‘I told them our job is to describe the community as it is, not just as we’d like it to be.’”

Loyal readers of Gary’s regular column, “Between the Lines,” will be pleased to know that his managerial style closely resembles that of his writing: measured, insightful, decent, understanding, and always funny. Even in the high-pressured environment that defines most newsrooms, a by-product of constant deadlines, brooding writers, snippy editors, and an industry in crisis, his presence was a calming force, a skill that seems to come so easily to him, yet one that I’ve found near-impossible to replicate.

As with my “Shtisel” column, Gary has served as my personal editor, and in retrospect — only in retrospect — I’m grateful for all the times he has saved me from myself. Often it’s something harmless, like axing my subjectively hilarious one-liners. Here and there I’ll include a comment in the text pleading with him to let me keep a joke, just because I know I’ll laugh at his wry response, even if he shoots me down.

Other times he’s saved me by recognizing that I’m too worked up about an issue — like school shootings, our president’s behavior, and angry readers — and I’ve allowed my emotion to infect the quality of my writing. In those instances he reminds me to take a breath, then helps me soften the sharp edges that mark the difference between my prose reading like a thoughtful analysis of a divisive topic versus the rantings of a belligerent crank on a message board.

Notwithstanding his stature and incredible accomplishments over the course of a career that fell just short of a half-century, to this day he shows fealty to some of the greatest characteristics of Abraham, Moses, and David: anava, humility. Yet even if Gary prefers to be “mochel his kavod,” to forego the honor owed him, I’m under no obligation to follow suit. So let me just say that I am honored he allowed me to float in his orbit these last few years and learn at his feet, and for inspiring me to be a better reporter, editor, and person.

And now that he is no longer editing my columns, I can finally say thank you to Gary Rosenblatt, “a legend in the world of Jewish journalism.”