When is a bottle more than a bottle?

Corie Robie of Maplewood and Rachel Reed of Livingston teach kindergarten at Temple Sharey Tefilo-Israel in South Orange. Recently, when one of their students found a bottle, they learned that not only was it a curiosity, but it would also lead to a perfect teaching moment.

It was the end of an unseasonably warm November day, and their kindergartners were out for recess, playing in the wooded area at the western end of the synagogue’s property. The congregation bought the property in 1948. Back then, the house that sits there was known as the Kip-Riker mansion, named after two early Dutch families who settled here. (Incidentally, the Kips family — as in Kip’s Bay — built it, and then later sold it to the Rikers family, of Rikers Island fame.)

Then Milo Dorfman of South Orange, 6, found something gleaming in the dirt.

“The first time I saw it I thought it was a gem,” Milo said. “I left it there because I couldn’t get it out.” But he wasn’t deterred. “I found a very strong stick that wouldn’t break and I dug it out and I saw it was a bottle. I thought it was in the ground because someone didn’t want to put it in the recycle bin, so I brought it to my teacher.”

“When Milo came running with that bottle in his hand, right away we knew it was more than a big hunk of glass,” Ms. Robie said. “We took it back to the classroom to give it a closer look.”

Milo had no idea of the bottle’s provenance…at least not right away.

Ms. Robie and Ms. Reed realized they’d been presented with opportunity to design a project with archaeology at its center. Because the kids were so excited, the teachers decided to go for it.

The problem was that neither Ms. Robie nor Ms. Reed knew very much about archaeology. But luck was on their side. When Ms. Robie posted a request for help from an archaeologist or conservator on a local Facebook group, they found Sarah Barack. 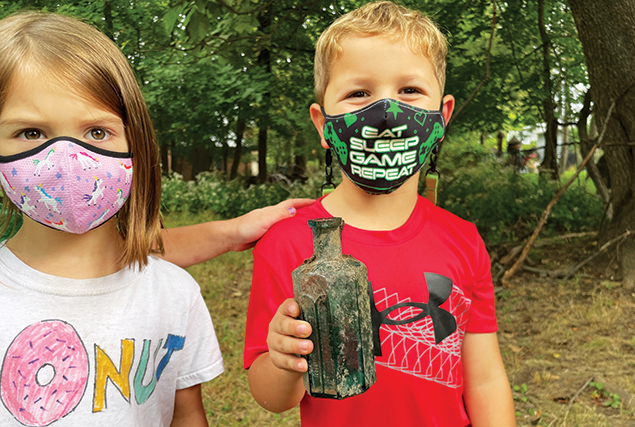 Milo, standing next to a friend, holds the bottle.

Ms. Barack, who lives in South Orange, is the head of conservation and the senior objects conservator at the Cooper Hewitt, Smithsonian Design Museum in Manhattan. By chance she also is a TSTI congregant. She agreed to help.

The Cooper Hewitt is dedicated to historic and contemporary design. It houses a collection of more than 210,000 objects spanning 30 centuries. Ms. Barack’s expertise includes objects like the bottle; she is a member of the American Institute for Conservation, and she is on the organization’s K-12 outreach group. That group works with educators interested in object-based study, a discipline designed to augment already established classroom curriculum. Ms. Barack already had worked with teachers and kids in a Manhattan school who had found and dug up “some really cool stuff” beneath the floorboards, she said.

She put together a lesson plan she could use at TSTI.

“In kindergarten, teachers often talk about life cycles,” Ms. Barack said. “Kids understand the life cycles of animals and people. I brought in a poster with the picture of a pregnant woman on it.” The poster included an arrow pointing to the woman’s midsection. Most kids who have younger siblings — or even those who don’t — know at the end of a pregnancy usually there will be a baby. “But I also wanted them to think of an archaeological artifact as having a life cycle.

But just like there was a piece missing on the image of the bottle on the poster, there was a big question mark associated with the bottle they’d found, she told the children. “We don’t really know how it got in the ground.”

Ms. Barack suggested there might be clues the bottle would yield that the kids could use to figure out what it was used for. As the children looked it over, they might wonder what it might mean if they say that there was something inside it. If it was damaged or worn, what would that say about how it was used?

“This is a way to look at something and learn its purpose or what it represents,” Ms. Barack said. “We try to make sense of the piece being studied, examine it as a key to learning about the past rather than thinking of it as just a bottle. In this way it’s as if the object has a second life cycle, a second level of importance to its existence. Though they didn’t know it, the students were about to apply a basic scientific method to the study of their bottle, called object-based study.

With Ms. Barack leading the way, Ms. Robie and Ms. Reed broke the class up into three groups. The first group had to put together puzzle pieces Ms. Barack had cut up — but there was a piece missing. The kids had to draw the outline of the missing piece. “What they were doing here was replicating, though it was only in two dimensions,” Ms. Barack said.

The second group used calipers to measure specific points on the bottle. Measuring, working with numbers—in other words, math—is a fundamental elementary school skill all kids are expected to master. 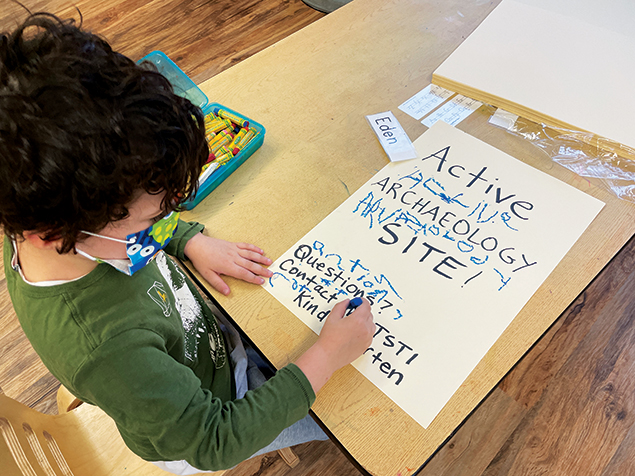 A kindergartener practices writing as he learns archaeology.

The third group reached into some bags Ms. Barack brought with her. There were different materials inside the bag — Velcro, plastic, and wood — and they had to describe them. By stretching their imaginations and using their words, they were practicing another skill children must develop — learning how to communicate what the objects are they feel without seeing them — in elementary school.

At no point in their time together did Ms. Barack or the two TSTI teachers mention the terms applied science, emergent curriculum, or object-based biography — but they were using those sophisticated approaches to education. At the same time that the children were fascinated with their archaeological find, they were being introduced to skills they would revisit later in their schooling: history, art, math, research skills, writing, and even chemistry.

“The kids were fascinated,” Ms. Reed said. “They went back to their dig area — they even cordoned off the area where they found the bottle, just like a true archaeological dig — and found more things.”

“Though most kids in kindergarten are not yet writers, they all knew how to label their findings, which included another bottle or two and some coins,” Ms. Robie said. One find, a quarter, was dated 1864.

“We even brought in a metal detector,” Ms. Reed said. “We had fun using it, even if it wasn’t very effective.”

“As a teacher, it was exciting to learn on our toes along with the children,” Ms. Robie said.

“It’s important for kids to connect with history,” Ms. Barack said. “The best way for them to do it at their age is through things. When they start to think about things people had in the past, it helps them understand how they lived.”

For Milo, finding the bottle was exciting. When asked why, he said, “It made me a better archaeologist.” But, he added. “I have a long time to decide what I want to be when I grow up.”

Milo’s dad, Michael, connected all the dots. “Corie and Rachel are amazing teachers,” he said. “They’re teaching real world problems and situations. They’re incorporating art and history and all the rest into their lesson plans. They’ve made their classroom a place where kids can be excited about learning.

“The unit they taught on the bottle is important. But what was more important was they gave the kids the confidence to learn from their own discoveries.”