A recruitment flyer found on a public board in Maplewood in December 2019 for the New Jersey European Heritage Association, responsible for about 70 percent of the white supremacy leafletting in 2019, according to the ADL.

In early 2019 leaflets promoting a public march for the New Jersey European Heritage Association, a white supremacist group, were hung around the Princeton University campus, causing an uproar and sparking plans for a large counter protest (the Heritage Association claimed that the announced march was actually a hoax).

By contrast, in December the New Jersey European Heritage Association posted flyers around Maplewood and South Orange, urging people to “Reclaim your nation, Reclaim your heritage.” The local police and the Department of Public Works were notified, the signs were removed, but there was little uproar. The muted reaction was by design.

The point of leafletting, an increasingly popular tactic of white supremacist groups, is not only to recruit members, but also to portray themselves as bigger than they are, with more capacity, more reach, and more power, according to Alex Rosemberg, the Anti-Defamation League New York/New Jersey’s director of community affairs, who spoke to NJJN by telephone. The idea is to have a small cadre of members do a lot of propaganda with an outsize impact on perception. It can also garner publicity, and stir anxiety.

The message is “Anyone not White Anglo-Saxon and European: here we are, we have a lot of power, and you should be afraid of us,” Rosemberg said. 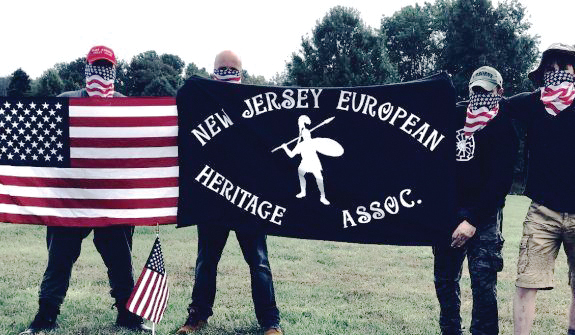 As anti-Semitic incidents in the state and across the country are surging, white supremacist groups like the New Jersey European Heritage Association have used leafletting to make their organizations appear to be larger than they are. Photo Courtesy ADL

In response, while the ADL still reports each incident to the police, it has stopped responding publicly to every leaflet. “We are holding back and asking people to do the same,” he said.

According to new data released by the ADL, there was a 250 percent surge in New Jersey of white supremacist propaganda in 2019, marking three years of exponential growth in the Garden State. In addition, across the country distribution of white supremacist propaganda more than doubled in 2019 over the previous year, making it the highest year on record for such activity in the United States.

“White supremacists consider propaganda distribution a convenient and anonymous way to promote their messages of hate and intolerance,” said Evan Bernstein, ADL’s Northeast Division vice president, in a Feb. 12 statement. “While we know extremists and hate groups are emboldened by the current environment, this dramatic surge in white supremacist flyering and propaganda distribution demonstrates how bigots are increasing efforts to spread their message.”

In addition to the leafletting, anti-Semitic incidents also increased in New Jersey in 2019, with 143 incidents documented by the ADL, up from 41 the year before and nearly 11 times higher than in 2017. New Jersey has the fifth-highest number of incidents in the nation. Of these, 15 occurred on college campuses around the state.

Some 70 percent of the propaganda distributed in New Jersey came from the New Jersey European Heritage Association, with the rest coming from the Patriot Front, American Identity Movement (a successor to the now disbanded Identity Evropa), Feuerkrieg Division, Daily Stormer Book Club, Loyal White Knights of the Ku Klux Klan, and The Base. (See sidebar next page)

However, those who do hold anti-Semitic beliefs feel more emboldened to speak and act on their ideas, according to Rosemberg. He also warned that “The majority of all extremists in this country are not specifically affiliated with any particular organization. They just believe what they believe.” The perpetrators of the four violent incidents directed at Jews and Jewish institutions in the last 18 months — Pittsburgh; Poway, Calif.; Monsey, N.Y.; and Jersey City — were not official members of these groups, though Rosemberg believes the ideas of white supremacy helped to radicalize them.

Leafletting, Rosemberg said, helps white supremacists advertise something of a softer appeal. To that end, some are selling patriotism and Americana in their symbols and manner of dress in lieu of swastikas and other traditional neo-Nazi gear. “It’s no longer the skinhead with swastika tattoos wearing military boots,” said Rosemberg. “Now they are wearing button-down shirts and crew cuts with khakis and blazers in an effort to be palatable and … mainstream.”

The other benefit of leafletting is anonymity, which lends an air of mystery to the organizations and increases their power, according to Rosemberg, who noted that when individuals are identified, they are not embraced by society: After the 2017 Unite the Right rally in Charlotte, Va., several participants who appeared in photos lost their jobs and were “named and shamed” on and offline.

The release of information about the groups is therefore a useful exercise, Rosemberg argues. “We’re giving the public a natural and accurate picture of what they’re actually up against … which is something that they don’t want.”