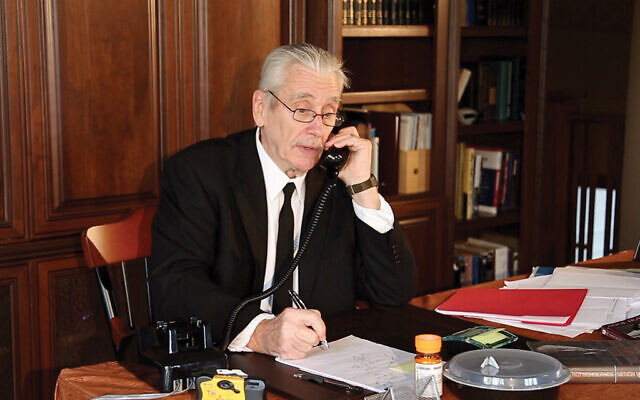 In the play, Simon Wiesenthal walks out of his office for the last time. The final days of his career are reimagined through the conceit of sharing his story with one last group of visitors. He leaves behind his desk, still strewn with decades of papers and notes he constantly scribbled in his painstaking search for Nazi war criminals.

“Wiesenthal” is the award-winning 2014 Off-Broadway play written by Tom Dugan, an actor and playwright of critically acclaimed one-person shows. Set in 2003, two years before Wiesenthal’s death, the play is an intimate, emotional recounting of a handful of his hundreds of investigations, including the 16-year hunt for Adolph Eichmann and the pursuit of Karl Silberbauer, the Gestapo officer who arrested Anne Frank. Wiesenthal’s persistence and hard-won humor are conveyed throughout the show’s 80-minute running time.

Wiesenthal survived five concentration camps and a death march before arriving in Mauthausen in February 1945. Weighing less than 100 pounds, he was barely alive when the camp was liberated by the U.S. Army in May.

After regaining his health, Wiesenthal began gathering and preparing evidence on Nazi atrocities for the War Crimes Section of the U.S. Army. He ultimately opened the Jewish Documentation Center, based in Vienna, in the early 1960s. It was from this office that he dedicated the rest of his life to documenting the crimes of the Holocaust and hunting down the perpetrators so that they could be brought to trial.

Directed by Mark Liebert of Verona, and starring Christopher Gibbs of Fanwood, “Wiesenthal” will be performed at Studio Playhouse in Montclair on April 17, followed by a show at Temple Sinai in Summit on April 18.

As an actor and director, Liebert has always been compelled by theater that is thought provoking and emotional. The fact that it speaks to him as a Jew with a personal connection to survivors made “Wiesenthal” a play that he said he was eager to direct.

A former child actor, in his adult years Liebert became a physical therapist. In addition to his private practice he worked at Daughters of Miriam in Clifton for 12 years. “I had 100 Jewish grandmothers, many of whom were survivors,” he said. Liebert is a member of Temple Ner Tamid in Bloomfield. 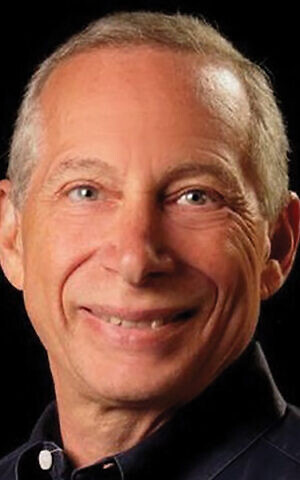 After a 15-year hiatus, he returned to theater. He has directed dozens of productions, designed the sets for 70 shows, and has written several full-length plays. He has also written or adapted 13 musicals to be performed by and for children with special needs. Currently, he is managing producer on the board of managers of Studio Players in Montclair.

Liebert said an experience with a family member had a profound impact on his life.

In the 1960s a relative in Germany was seeking family members and she found Liebert’s father. “Her mother died and her sister committed suicide after the war,” Liebert said. “I will never forget the look in my relative’s eyes — it was like nothing I had ever seen.”

“With ‘Wiesenthal,’” he said, “I hope to keep the history of the Holocaust and its lessons alive by bringing the play to a diverse range of audiences.” The play is suitable for high school age and above.

Gibbs, who plays Wiesenthal, is a seasoned actor and retired history teacher. He has appeared in over 80 plays and musicals with New Jersey’s Chester Theatre Group and Studio Players and in venues such as the George Street Playhouse, Barn Theatre, Kelsey Theatre, and Mondo.

He taught history at Rutgers University and Middlesex and Union County colleges. His last teaching gig was at Temple Emanu-El in Westfield, where for many years he taught in its adult education program. One of his topics was the rise of Hitler and the Final Solution “from the point of view of people in the United States: the people working to keep Jews out, the people demanding the government ‘do something.’”

Eager to do more acting, Gibbs retired from teaching in 2015. After one of his former students at Emanu-El saw Dugan perform “Wiesenthal,” he contacted Gibbs, urging him to see the play. Gibbs then reached out to Liebert, with whom he had worked a number of times, and the two agreed that the play powerfully illuminates Wiesenthal’s dedication to achieving justice for the victims and survivors of the Holocaust.

“Our goal is to create an impactful evening that leaves people energized and talking,” said Liebert. “This is why we have decided to do a talk back after each performance. We are hopeful that people will leave the theater with more knowledge than they entered and driven to find out even more.”

It’s no coincidence that the performances of “Wiesenthal” coincide with the observance of Yom HaShoah on April 21. Liebert is deeply concerned that knowledge of, and interest in, the Holocaust is rapidly fading in both the Jewish community and larger world.

“It doesn’t feel like ‘just history’ anymore,” he said. “It’s especially relevant today as I see what I can only call the dehumanization of immigrants, and people of different races, religions, and gender. For me, it is frightfully reminiscent of Germany in the 1930s.”

For information on upcoming shows or to schedule a performance, contact Mliebert.giblie@gmail.com.